First Report on Chitin in a Non-Verongiid Marine Demosponge: The Mycale euplectellioides Case
Next Article in Special Issue

The genus Streptomyces produces secondary metabolic compounds that are rich in biological activity. Many of these compounds are genetically encoded by large secondary metabolism biosynthetic gene clusters (smBGCs) such as polyketide synthases (PKS) and non-ribosomal peptide synthetases (NRPS) which are modular and can be highly repetitive. Due to the repeats, these gene clusters can be difficult to resolve using short read next generation datasets and are often quite poorly predicted using standard approaches. We have sequenced the genomes of 13 Streptomyces spp. strains isolated from shallow water and deep-sea sponges that display antimicrobial activities against a number of clinically relevant bacterial and yeast species. Draft genomes have been assembled and smBGCs have been identified using the antiSMASH (antibiotics and Secondary Metabolite Analysis Shell) web platform. We have compared the smBGCs amongst strains in the search for novel sequences conferring the potential to produce novel bioactive secondary metabolites. The strains in this study recruit to four distinct clades within the genus Streptomyces. The marine strains host abundant smBGCs which encode polyketides, NRPS, siderophores, bacteriocins and lantipeptides. The deep-sea strains appear to be enriched with gene clusters encoding NRPS. Marine adaptations are evident in the sponge-derived strains which are enriched for genes involved in the biosynthesis and transport of compatible solutes and for heat-shock proteins. Streptomyces spp. from marine environments are a promising source of novel bioactive secondary metabolites as the abundance and diversity of smBGCs show high degrees of novelty. Sponge derived Streptomyces spp. isolates appear to display genomic adaptations to marine living when compared to terrestrial strains. View Full-Text
Keywords: marine Streptomyces; biosynthetic gene clusters; secondary metabolites marine Streptomyces; biosynthetic gene clusters; secondary metabolites
►▼ Show Figures 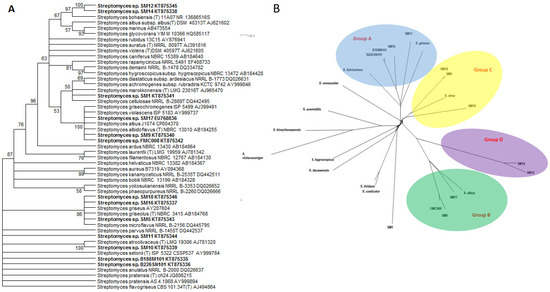