Absorption and Transport of Sea Cucumber Saponins from Apostichopus japonicus

To Pee, or Not to Pee: A Review on Envenomation and Treatment in European Jellyfish Species

There is a growing cause for concern on envenoming European species because of jellyfish blooms, climate change and globalization displacing species. Treatment of envenomation involves the prevention of further nematocyst release and relieving local and systemic symptoms. Many anecdotal treatments are available but species-specific first aid response is essential for effective treatment. However, species identification is difficult in most cases. There is evidence that oral analgesics, seawater, baking soda slurry and 42–45 °C hot water are effective against nematocyst inhibition and giving pain relief. The application of topical vinegar for 30 s is effective on stings of specific species. Treatments, which produce osmotic or pressure changes can exacerbate the initial sting and aggravate symptoms, common among many anecdotal treatments. Most available therapies are based on weak evidence and thus it is strongly recommended that randomized clinical trials are undertaken. We recommend a vital increase in directed research on the effect of environmental factors on envenoming mechanisms and to establish a species-specific treatment. Adequate signage on jellyfish stings and standardized first aid protocols with emphasis on protective equipment and avoidance of jellyfish to minimize cases should be implemented in areas at risk. View Full-Text
Keywords: jellyfish; European; cnidarians; nematocyst; stings; envenomation; pain; treatment; relief jellyfish; European; cnidarians; nematocyst; stings; envenomation; pain; treatment; relief
►▼ Show Figures 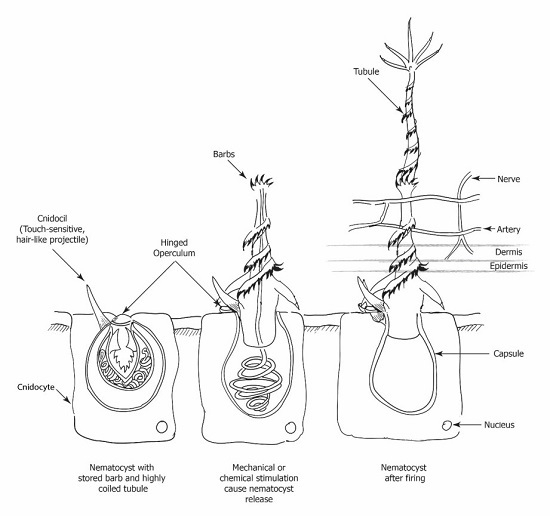