Lipid Composition, Fatty Acids and Sterols in the Seaweeds Ulva armoricana, and Solieria chordalis from Brittany (France): An Analysis from Nutritional, Chemotaxonomic, and Antiproliferative Activity Perspectives

:
Seafood is assumed to be beneficial for cardiovascular health, mainly based on plasma lipid lowering and anti-inflammatory effects of n-3 polyunsaturated fatty acids. However, other plasma risk factors linked to cardiovascular disease are less studied. This study aimed to penetrate the effect of a phospholipid-protein complex (PPC) from Antarctic krill on one-carbon metabolism and production of trimethylamine-N-oxide (TMAO) in rats. Male Wistar rats were fed isoenergetic control, 6%, or 11% PPC diets for four weeks. Rats fed PPC had reduced total homocysteine plasma level and increased levels of choline, dimethylglycine and cysteine, whereas the plasma level of methionine was unchanged compared to control. PPC feeding increased the plasma level of TMAO, carnitine, its precursors trimethyllysine and γ-butyrobetaine. There was a close correlation between plasma TMAO and carnitine, trimethyllysine, and γ-butyrobetaine, but not between TMAO and choline. The present data suggest that PPC has a homocysteine lowering effect and is associated with altered plasma concentrations of metabolites related to one-carbon metabolism and B-vitamin status in rats. Moreover, the present study reveals a non-obligatory role of gut microbiota in the increased plasma TMAO level as it can be explained by the PPC’s content of TMAO. The increased level of carnitine and carnitine precursors is interpreted to reflect increased carnitine biosynthesis.
Keywords:
phospholipid-protein complex; Omega-3 polyunsaturated fatty acids; Euphausia superba; one-carbon metabolism; homocysteine; trimethylamine-N-oxide; carnitine

Fish oil, enriched by long-chain n-3 PUFAs as eicosapentaenoic acid (EPA) and docosahexaenoic acid (DHA), is reported to have protective roles against arteriosclerotic- and cardiovascular diseases [1,2]. It has lately been suggested that some of the beneficial influence of seafood on health could arise from the protein fraction, and studies in rodents have shown that a number of fish hydrolysates have lipid lowering and antioxidant effects [3,4]. Antarctic krill (Euphausia superba) has a high protein and lipid content, and has mainly been utilized as a novel source of n-3 PUFAs. While krill supplements have been shown to reduce plasma lipid levels in rodent and human studies [5,6], the effect on other risk factors involved in cardiovascular disease has not been analyzed.
Elevated plasma total homocysteine (tHcy) increases the likelihood of endothelial cell injury and has been implicated as an independent risk factor for atherosclerotic and cardiovascular disease [7], although its direct association to ischemic stroke has been disputed in recent meta-analyses [8,9]. Plasma tHcy have further been demonstrated to be inversely associated to plasma levels of folate (vitamin B9), cobalamin (vitamin-B12) and pyroxidal phosphate (vitamin B6), the three vitamins involved in the conversion of homocysteine (Hcy) to methionine (Met) or cysteine [10,11]. However, vitamin B interventions have not been able to prevent cardiovascular events [12]. Hcy, a sulfur-containing, non-protein amino acid, is not obtained from the diet—it is generated from S-adenosylhomocysteine (SAH) via the S-adenosyhomocysteine hydrolase during methylation processes in the body [13]. Remethylation of Hcy back to Met is catalyzed by Met synthase (MS) with 5-methyltetrahydrofolate (5-mTHF) as the methyl donor [14,15]. Cobalamin (vitamin B12) is a cofactor in this enzymatic reaction (Figure 1). This step takes place in all tissues, but in liver and kidney Hcy can also be remethylated to Met by the zinc metalloenzyme betaine-Hcy S-methyltransferase (BHMT) [16,17,18]. Betaine is the methyl donor for BHMT and the products are Met and dimethylglycine (DMG). Met can further be catabolized to Met sulfoxide by the niacin (vitamin B3)-dependent Met sulfoxide reductase A (MSR) [19]. Finally, Hcy catabolism through the transsulfuration pathway to form cysteine is carried out by two pyridoxine (vitamin B6)-dependent enzymes, cystathionine-beta synthase (CBS) and cystathionine gamma-lyase (CTH). Hcy has been suggested to promote atherosclerosis by elevating levels of reactive oxygen species [20], as well as through effects on lipoprotein metabolism [21]. Dietary interventions influencing both Hcy and plasma lipid levels could potentially be beneficial for health. Both n-3 polyunsaturated fatty acids (PUFAs) [22], and diets with different amino acid composition [23], have been reported to reduce serum tHcy levels. 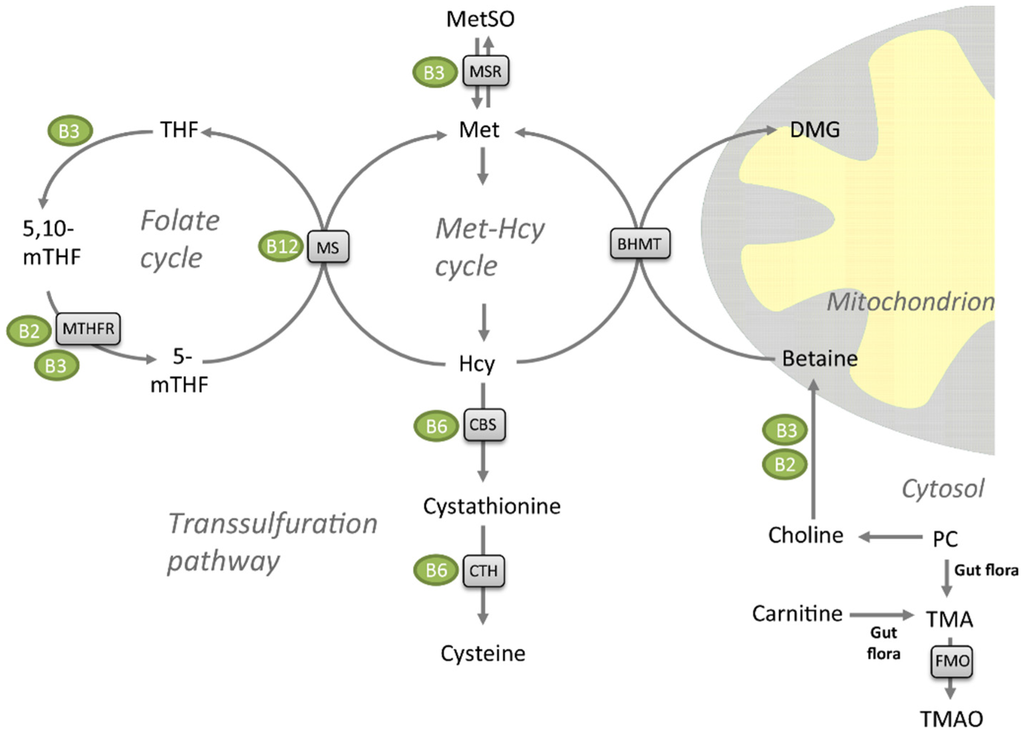 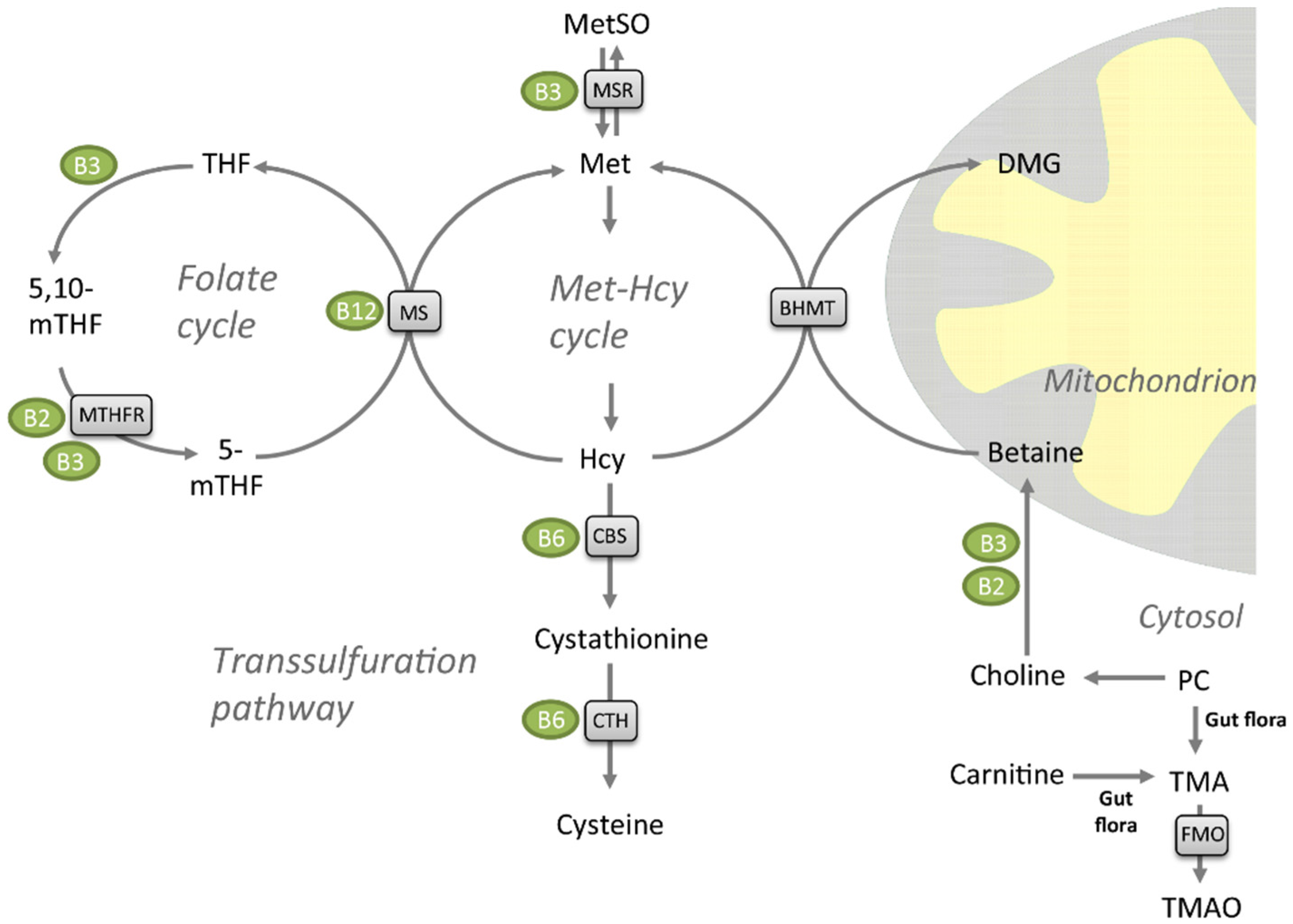 The majority of the n-3 PUFAs in krill oil is associated with phospholipids, in particular phosphatidylcholine (PC), while in fish oil the PUFAs are in the form of triacylglycerol (TAG) or fatty acid ethyl esters. The phospholipid PC is the major dietary source of choline and it was recently reported that microbiota metabolizes choline to form trimethylamine (TMA), which can be oxidized by the vitamin-B2 dependent enzyme flavin adenine monomaine oxidase (FMO) in the liver to produce trimethylamine-N-oxide (TMAO) (Figure 1) [24,25]. Metabolism of dietary carnitine by intestinal microbiota has also been found to produce TMAO [26]. Intestinal microbial metabolism of PC and carnitine has been found to promote arteriosclerosis and is associated with an increased risk of incident major adverse cardiovascular events, but only among subjects with high TMAO levels [25,27]. Nevertheless, it is important to note that TMAO has beneficial effects in marine animals; TMAO is a common and compatible osmolyte in muscle tissues that protects proteins against various destabilizing forces [28]. It is reported that TMAO counteract the toxic effects of urea and ammonia on proteins [29], and may also depress the freezing point and counteract the effect of hydrostatic pressure of enzyme function in deep-sea animals [28,30,31].
The aim of the present study was to provide insight into effects of a phospholipid-protein complex (PPC) from krill with emphasis on diet-related changes in plasma tHcy and TMAO. Thus, we measured the effect of PPC on the Met-Hcy cycle, transsulfuration pathway, vitamin B status and hepatic gene expression, as well as plasma levels of choline, betaine, carnitine, and carnitine precursors, all linked to TMAO generation.

2.1. Metabolites of the Methionine-Homocysteine Cycle 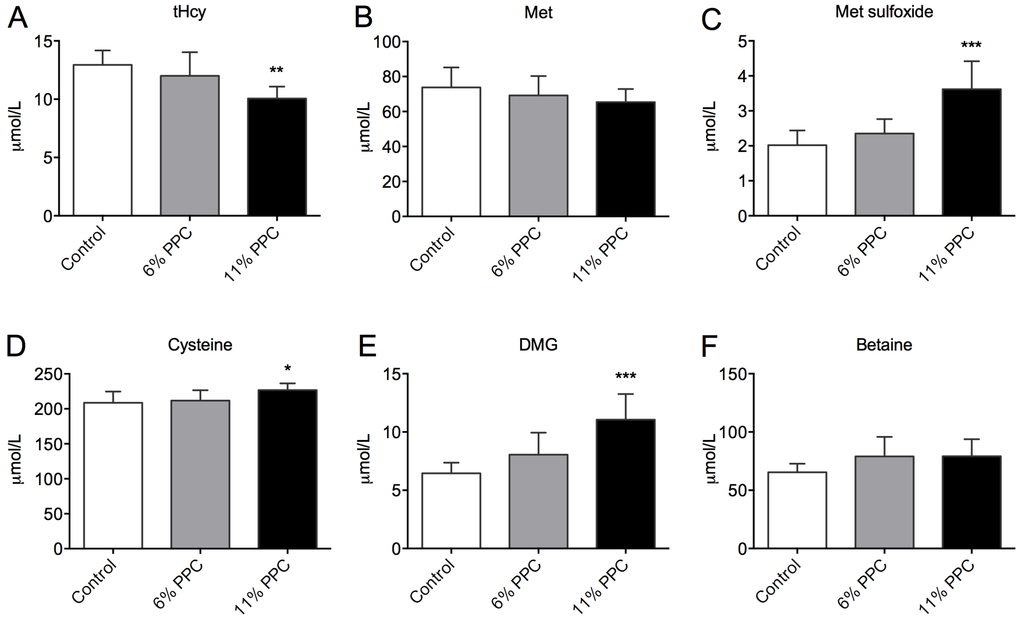 Among the B-vitamins, higher levels of plasma quinolinic acid (vitamin B3, Figure 3A), pyroxidal phosphate (PLP; vitamin B6, Figure 3B), and cobalamin (vitamin B12, Figure 3C), was measured in the 11% PPC-fed rats compared to controls. The plasma levels of 5-mTHF (activated form of folate/vitamin B9) did not differ between the groups (Figure 3D). In addition, no differences in plasma riboflavin (vitamin B2), flavin mononucleotide (FMN; a biomolecule produced from riboflavin), nicotinamid (vitamin B3), N’-methylnicotinamid (metabolite of nicotinamid), pyridoxic acid (form of vitamin B6), and pyridoxal (form of vitamin B6) were found in the PPC-fed rats versus controls (Figure S1). 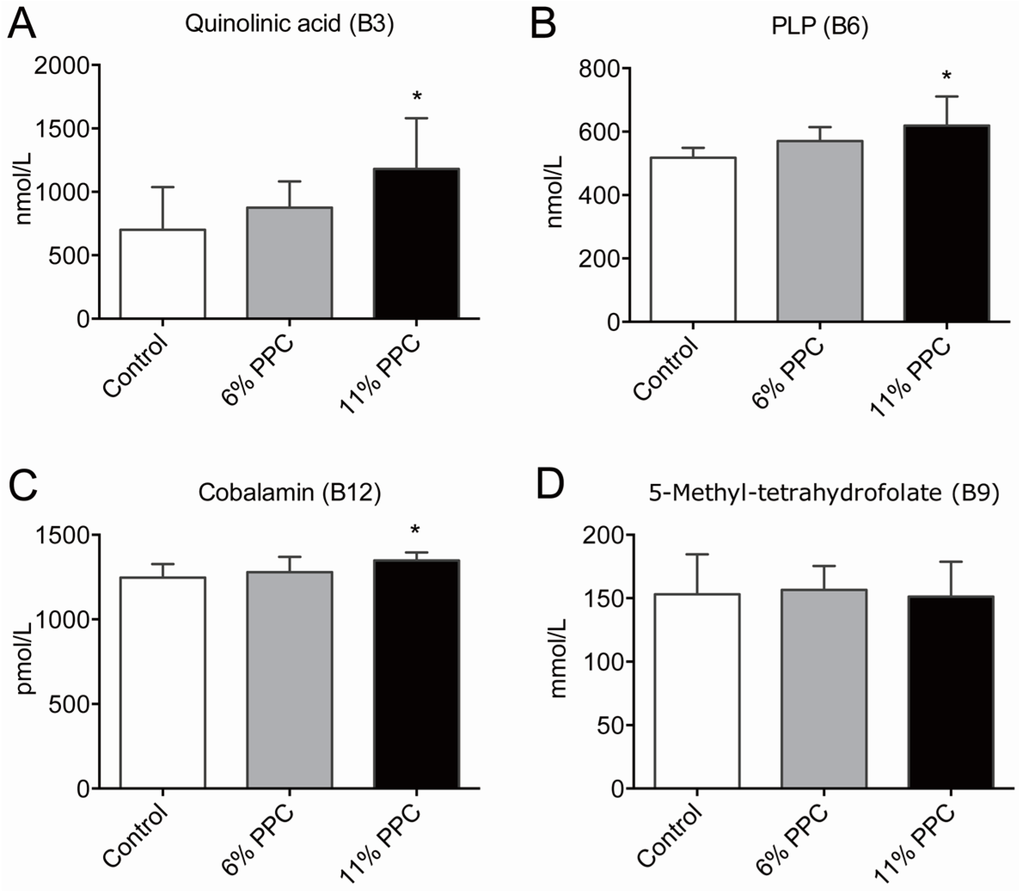 PPC is rich in PC, and is a natural source of TMAO, but has low concentrations of carnitine, carnitine precursors as well as free choline (Table 1). After PPC-feeding the plasma level of choline was increased in the 11% PPC-fed rats compared to the control-fed rats (Figure 4A), whereas the plasma levels of TMAO were increased by both doses of PPC (Figure 4B). The plasma levels of carnitine and the intermediates in carnitine biosynthesis, trimethyllysine (TML) and γ-butyrobetaine, were significantly increased by PPC-feeding compared to control (Figure 4C–E). Further, a close correlation between plasma TMAO and TML, carnitine and γ-butyrobetaine, but not choline was found (Figure 5). 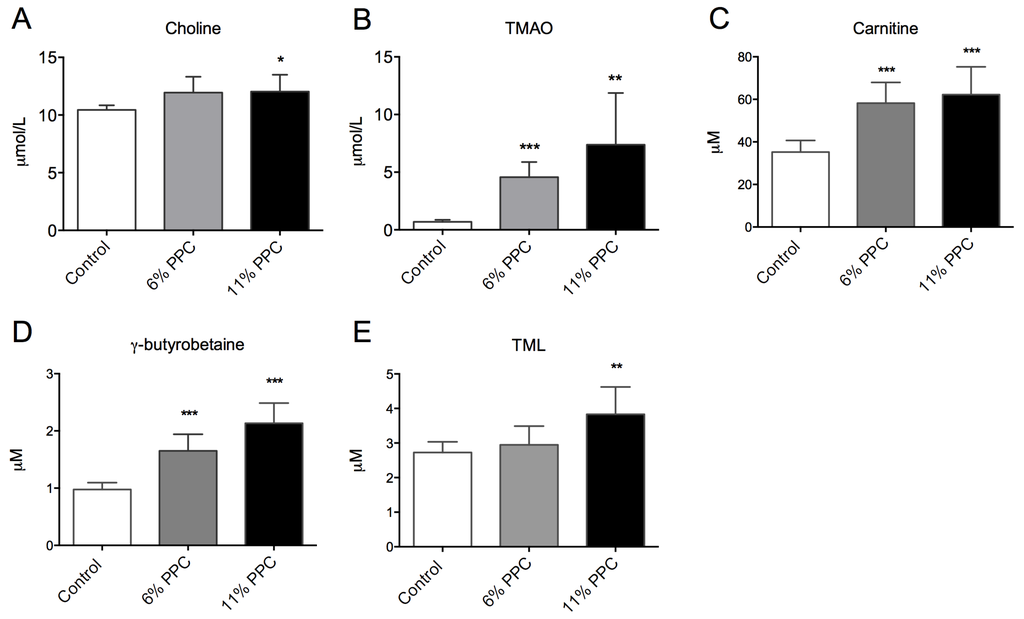 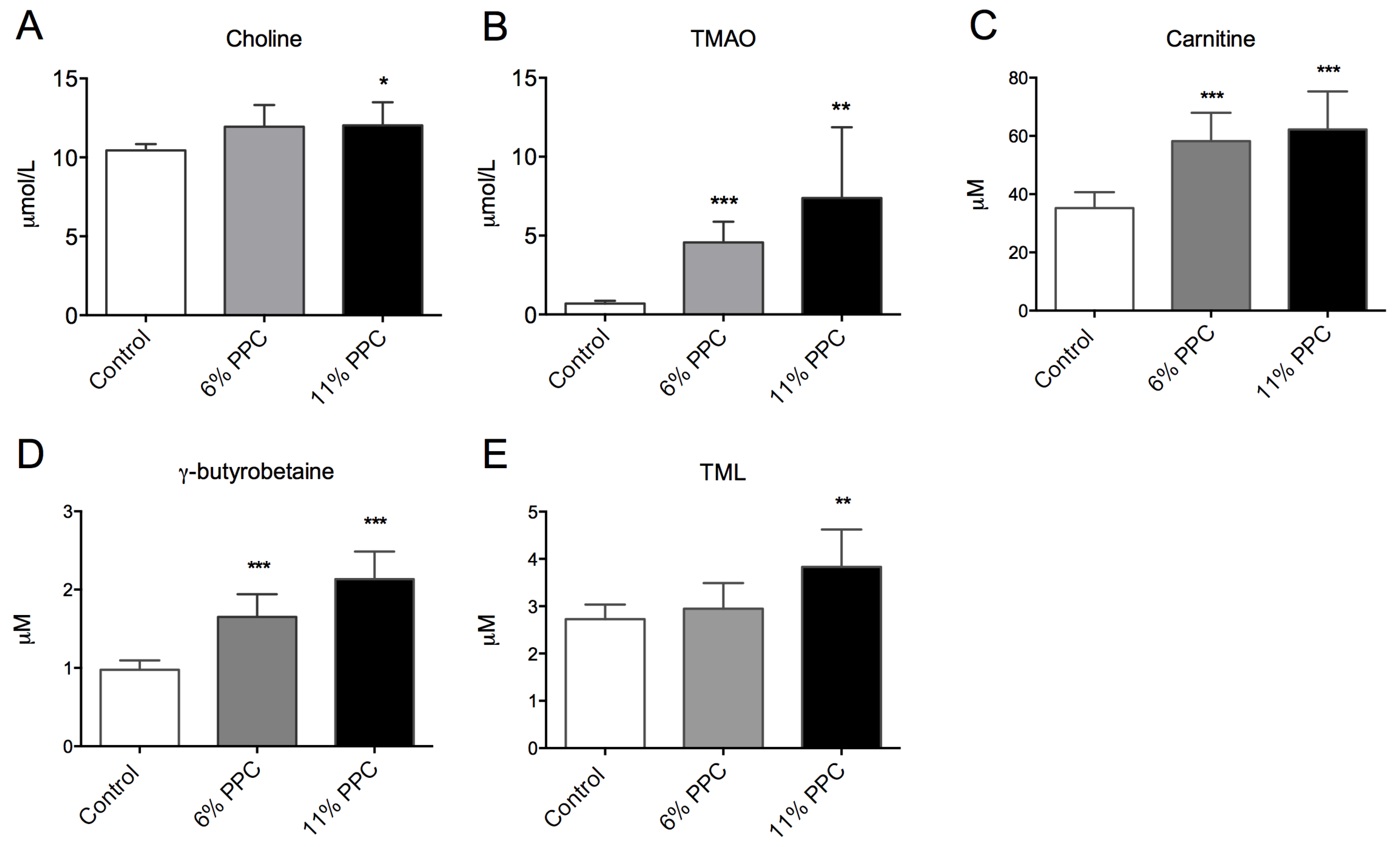 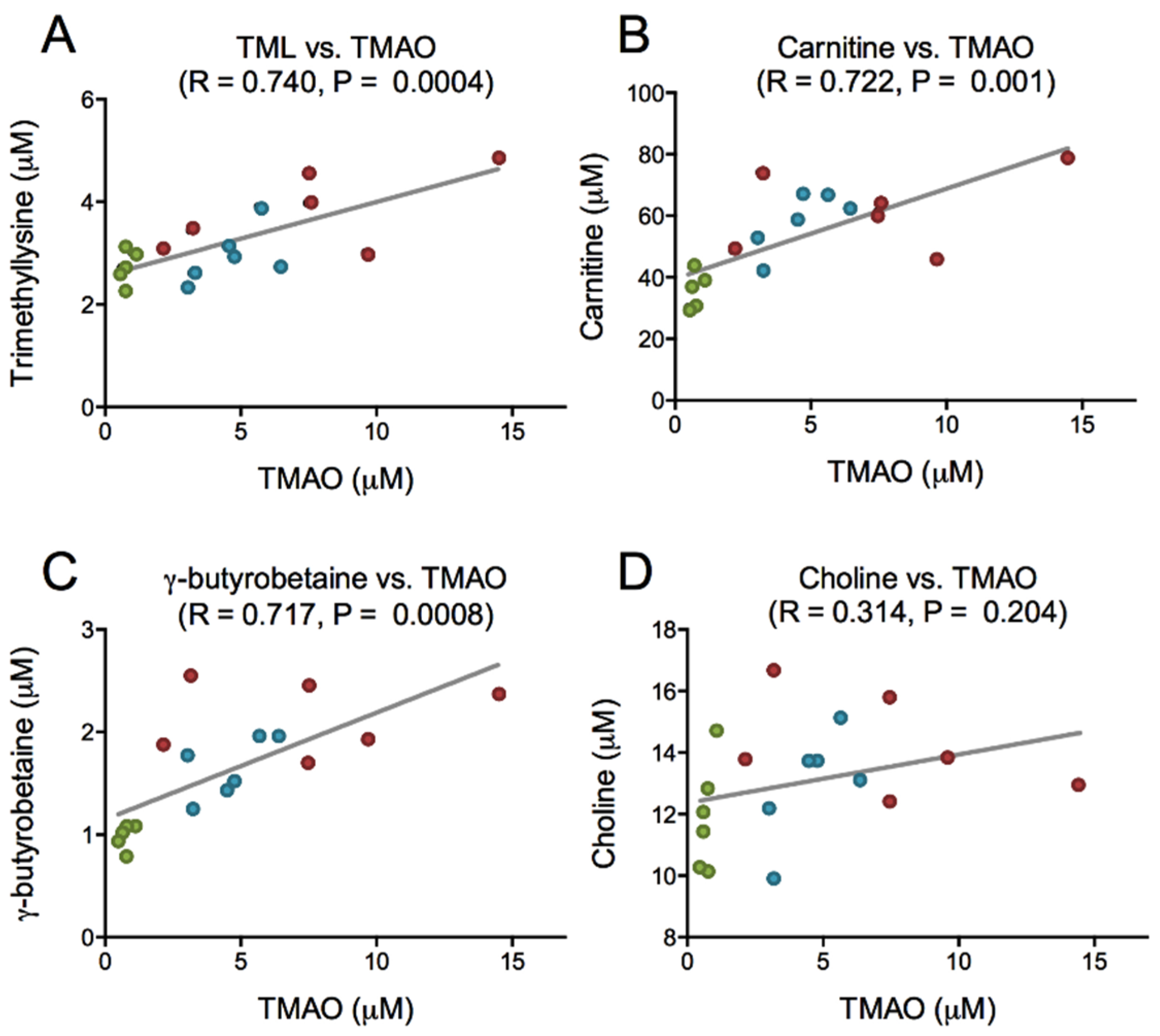 The animal study was conducted according to the Guidelines for the Care and Use of Experimental Animals, and in accordance with the Norwegian legislation and regulations governing experiments using live animals. The Norwegian State Board of Biological Experiments with Living Animals approved the protocol (Permit number 2013-5324). All efforts were made to optimize the animal environment, and minimize suffering.
Male Wistar rats, aged 5 to 6 weeks (Taconic Tornbjergvej facility, Elby, Denmark), were randomized and housed pair wise in open cages (n = 6 rats per group). They were kept under standard laboratory conditions with temperature 22 ± 1 °C, dark/light cycles of 12/12 h, relative humidity 43% ± 5%, and 20 air changes per hour. The rats were acclimatized under these conditions for one week prior to study start, with free access to standard chow and water.
The rats were fed ad libitum for 4 weeks on a 10% fat diet, either as a control diet (2% soy oil, 8% lard, 20% casein, wt.%) or an experimental diet, where casein and lard were replaced with PPC at 6% or 11% (wt.%). See Ramsvik et al. for a detailed description of the diet ingredients [33]. Krill PPC, an Antarctic krill meal from Euphausia superba (RIMFROST GENUINE®), was delivered by Olympic Seafood AS (Fosnavaag, Norway). The PPC consisted of 46.4% protein and 45.7% fat, and contained 39.0 g phosphatidylcholine, 13 g eicosapentaenoic acid (EPA, C20:5n-3), and 7.9 g docosahexaenoic acid (DHA, C22:6n-3) per 100 g extracted fat. The fatty acid composition of the PPC and the amino acid composition in casein and the PPC are presented in Table 2 and Table 3, respectively. Feed intake and weight gain were determined twice a week. All rats were killed on day 28. They were anesthetized by inhalation of 2% Isofluorane (Forane, from Abbot Laboratories Ltd., Abbott Park, IL, USA) and thoracotomy, cardiac puncture, and exsanguination was performed. Plasma and liver samples were stored at −80 °C.

A phospholipid-protein complex from krill reduced plasma tHcy levels, possibly associated with the n-3 PUFA, choline and betaine content of the diet, which suggest a positive health effect of PPC. On the other hand, a higher plasma level of TMAO, as observed in the PPC-fed rats, can potentially increase the risk of cardiovascular disease. Importantly, this increase seemed to be mainly due to direct uptake of TMAO from the PPC and not through microbiota-dependent mechanisms. As seafood has been shown to improve cardiovascular health, beneficial effects could counteract the possible negative effect of TMAO uptake. Whether TMAO from seafood in fact has negative effects when not generated from TMA produced in the intestines has yet to be determined. Although there was a significant correlation between plasma carnitine, TML and TMAO in rats, this was not due to TMA generation from carnitine and TML by microbiota, but rather a stimulation of carnitine biosynthesis dependent on PPC-intake.

The authors would like to thank Kari Williams, Kari Mortensen, and Torunn Eide for valuable technical assistance. We also thank Eline Milde and the staff at the UiB animal facility. The Norwegian Research Council and Olympic Seafood AS (Project No. 228069), and the University of Bergen through the Clinical Nutrition Program, funded the project.

Olympic Seafood AS employs Marie S. Ramsvik and Inge Bruheim, provided the PPC, and partly financed the study, but had no role in the study design; in the collection, analysis and interpretation of the data; in the writing of the report; or in the decision to submit the article for publication.