Fucan is a term that defines a family of homo- and hetero-polysaccharides containing sulfated l-fucose in its structure. In this work, a heterofucan (F2.0v) from the seaweed, Dictyota menstrualis, was evaluated as an antinociceptive and anti-inflammatory agent. F2.0v (20.0 mg/kg) inhibits 100% of leukocyte migration into the peritoneal cavity after chemical stimulation. However, F2.0v does not alter the expression of interleukin-1 beta (IL-1β) and interleukin-6 (IL-6), as well as tumor necrosis factor alpha (TNF-α). F2.0v (20.0 mg/kg) has peripheral antinociceptive activity with potency similar to dipyrone. On the other hand, it had no effect on pain response on the hot plate test. Confocal microscopy analysis and flow cytometry showed that F2.0v binds to the surface of leucocytes, which leads us to suggest that the mechanism of action of anti-inflammatory and antinociceptive F2.0v is related to its ability to inhibit the migration of leukocytes to the site of tissue injury. In summary, the data show that F2.0v compound has great potential as an antinociceptive and anti-inflammatory, and future studies will be performed to further characterize the mechanism of action of F2.0v. View Full-Text
Keywords: fucan; brown seaweed; pain; analgesic; dictyotales fucan; brown seaweed; pain; analgesic; dictyotales
►▼ Show Figures 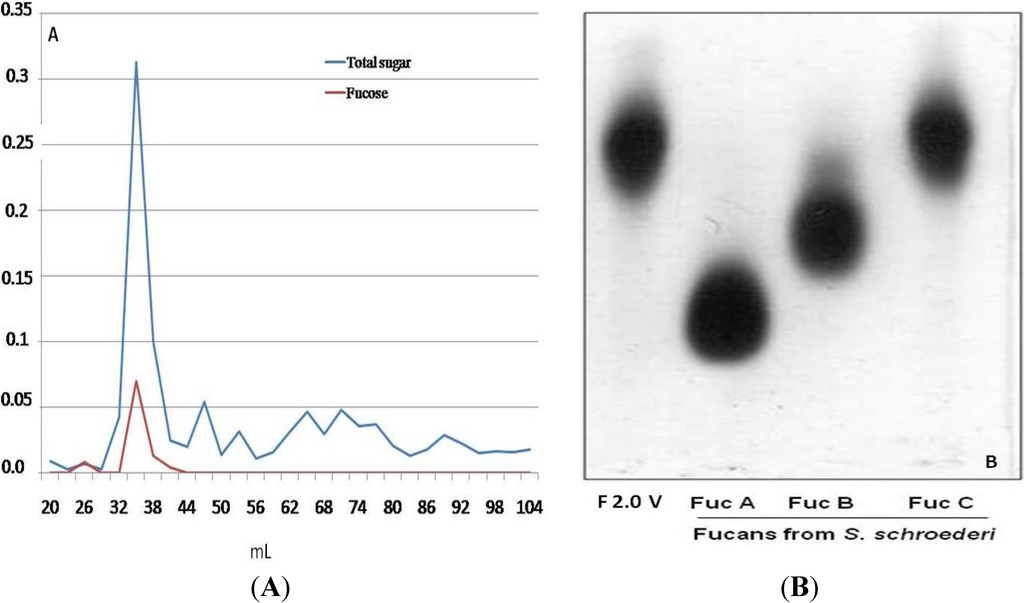