Dendritic cells (DCs) are antigen presenting cells, which can present antigens to T-cells and play an important role in linking innate and adaptive immunity. DC maturation can be induced by many stimuli, including pro-inflammatory cytokines and bacterial products, such as lipopolysaccharides (LPS). Here, we examined the immunomodulatory effects of marine cembrane compounds, (9E,13E)-5-acetoxy-6-hydroxy-9,13-dimethyl-3- methylene-3,3a,4,5,6,7,8,11,12,14a-decahydro-2H-cyclotrideca[b]furan-2-one (1), (9E,13E)- 5-acetoxy-6-acetyl-9,13-dimethyl-3-methylene-3,3a,4,5,6,7,8,11,12,14a-decahydro-2H-cyclotrideca[b]furan-2-one (2), lobocrassin B (3), (−)14-deoxycrassin (4), cembranolide B (5) and 13-acetoxysarcocrassolide (6) isolated from a soft coral, Lobophytum crassum, on mouse bone marrow-derived dendritic cells (BMDCs). The results revealed that cembrane-type diterpenoids, especially lobocrassin B, effectively inhibited LPS-induced BMDC activation by inhibiting the production of TNF-α. Pre-treatment of BMDCs with Lobocrassin B for 1 h is essential to prohibit the following activation induced by various toll-like receptor (TLR) agonists, such as LPS, zymosan, lipoteichoic acid (LTA) and Pam2CSK4. Inhibition of NF-κB nuclear translocation by lobocrassin B, which is a key transcription factor for cytokine production in TLR signaling, was evident as assayed by high-content image analysis. Lobocrassin B attenuated DC maturation and endocytosis as the expression levels of MHC class II and the co-stimulatory molecules were downregulated, which may affect the function of DCs to initiate the T-cell responses. Thus, lobocrassin B may have the potential in treatment of immune dysregulated diseases in the future. View Full-Text
Keywords: antigen presentation; bone-marrow derived dendritic cell (BMDC); marine natural compound; tumor necrosis factor-α antigen presentation; bone-marrow derived dendritic cell (BMDC); marine natural compound; tumor necrosis factor-α
►▼ Show Figures 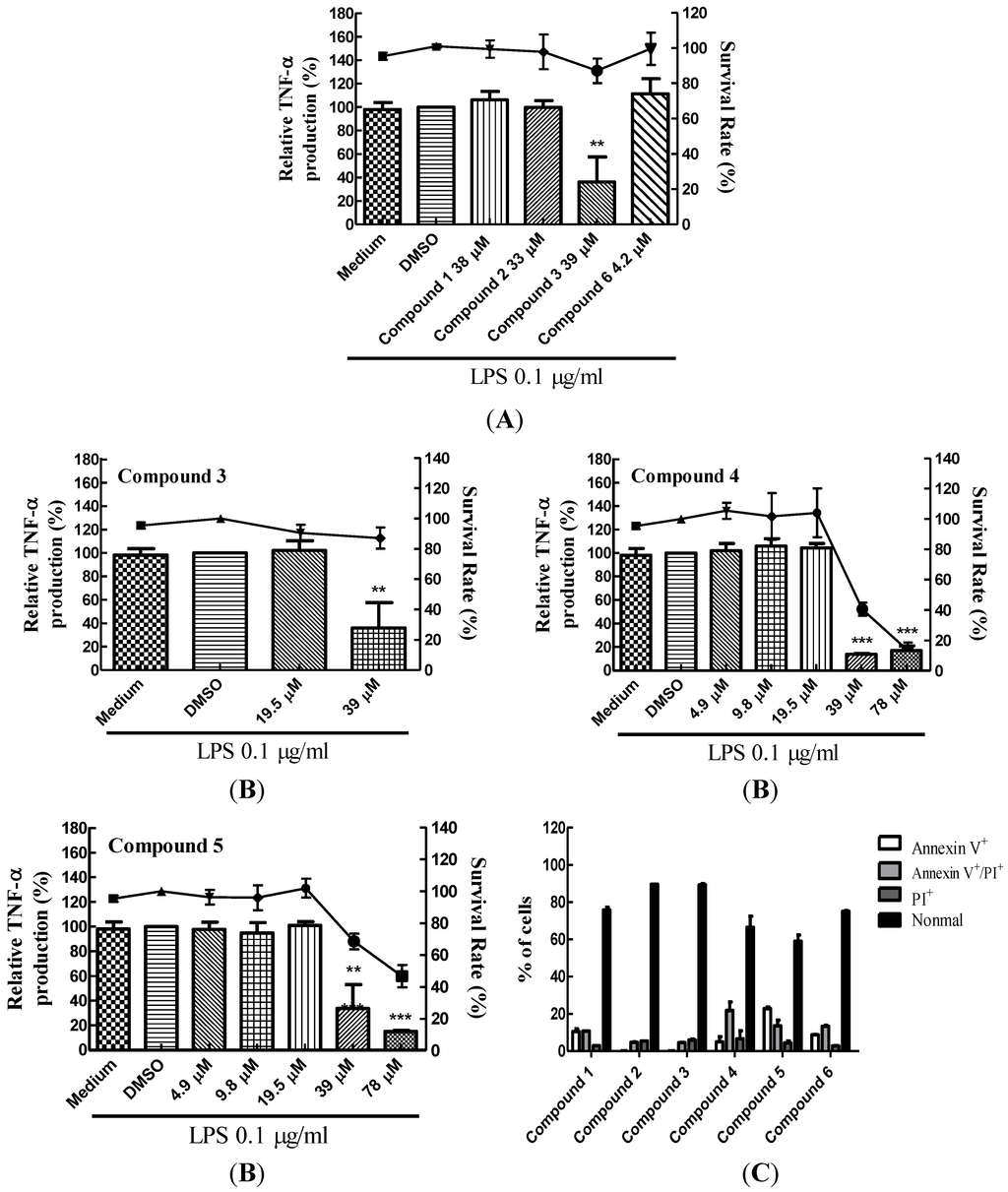