Chemistry of the Nudibranch Aldisa andersoni: Structure and Biological Activity of Phorbazole Metabolites
Next Article in Special Issue

Pigmentation and Spectral Absorbance Signatures in Deep-Water Corals from the Trondheimsfjord, Norway

Lilian R. B. Mariutti
and

Carotenoid intake has been associated with the decrease of the incidence of some chronic diseases by minimizing the in vivo oxidative damages induced by reactive oxygen (ROS) and nitrogen species (RNS). The carotenoids are well-known singlet oxygen quenchers; however, their capacity to scavenge other reactive species, such as peroxyl radical (ROO•), hydroxyl radical (HO•), hypochlorous acid (HOCl) and anion peroxynitrite (ONOO−), still needs to be more extensively studied, especially using membrane-mimicking systems, such as liposomes. Moreover, the identification of carotenoids possessing high antioxidant capacity can lead to new alternatives of drugs or nutritional supplements for prophylaxis or therapy of pathological conditions related to oxidative damages, such as cardiovascular diseases. The capacity to scavenge ROO•, HO•, HOCl and ONOO− of seven carotenoids found in marine organisms was determined in liposomes based on the fluorescence loss of a fluorescent lipid (C11-BODIPY581/591) due to its oxidation by these reactive species. The carotenoid-bearing hydroxyl groups were generally more potent ROS scavengers than the carotenes, whilst β-carotene was the most efficient ONOO− scavenger. The role of astaxanthin as an antioxidant should be highlighted, since it was a more potent scavenger of ROO•, HOCl and ONOO− than α-tocopherol. View Full-Text
Keywords: liposomes; astaxanthin; carotenoids; ROS; RNS liposomes; astaxanthin; carotenoids; ROS; RNS
►▼ Show Figures 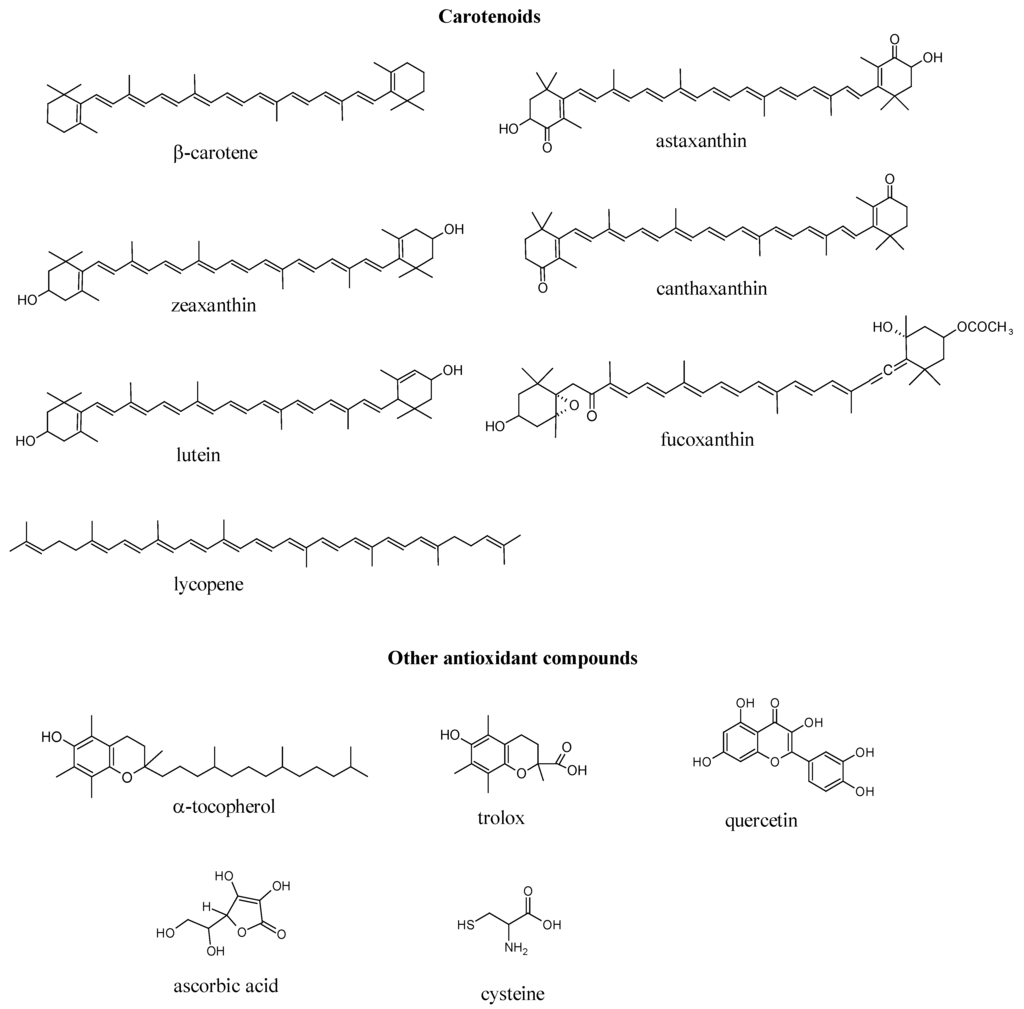