The Endocannabinoid System as Pharmacological Target Derived from Its CNS Role in Energy Homeostasis and Reward. Applications in Eating Disorders and Addiction
Previous Article in Journal

Beta-Blockers and Oxidative Stress in Patients with Heart Failure

Reactive oxygen species (ROS) induce ‘oxidative stress’ unless the prepared antioxidant mechanisms compensate for the ROS load [1]. Oxidative stress has been implicated in the pathogenesis of cardiovascular disease [2,3], including heart failure [4,5]. Increased oxidative stress results from an imbalance between ROS load and antioxidative mechanisms. Catecholamines [6-8], angiotensin II [9-11], tumor necrosis factor-alpha (TNF-alpha) [9], tachycardia and ischemia [12] induce generation of ROS in the myocardium. Activities of some antioxidant enzymes such as paraoxonase-1 (PON-1) in serum and manganese superoxide dismutase (MnSOD) in the myocardium, if not all enzymes, are diminished in patients with heart failure [7,13-15]. Thus, oxidative stress levels are elevated in the failing myocardium [6,16-18], and ROS causes hypertrophy, apoptosis/cell death and intracellular Ca2+ overload in cardiac myocytes [7,9,10,19-21]. In this review, we will focus on the involvement of oxidative stress in patients with heart failure and its reduction by beta-blocker therapy.

In 1991, Belch et al. reported that concentrations of a plasma lipid peroxide, malondialdehyde, were significantly higher in the patients with congestive heart failure than in controls [4]. There was a significant negative correlation between malondialdehyde and left ventricular ejection fraction. Mallat et al. reported that pericardial levels of 8-iso-prostaglandin F2a (8-iso-PGF2a), a specific nonenzymatic peroxidation product of arachidonic acid, increase with increase in the functional severity of heart failure and are associated with ventricular dilatation [22].

As for oxidative stress markers other than lipid peroxides, levels of 8-hydroxy-2-deoxyguanosine (8-OHdG), a marker of oxidative DNA damage, are elevated in serum and urine of patients with heart failure, and urinary 8-OHdG reflects the clinical severity of CHF on the basis of symptomatic status and cardiac dysfunction (Figure 1A) [18,23]. Results of these studies indicate that oxidative stress is involved in severity of heart failure.

Levels of oxidative stress are also elevated in the myocardium of patients with heart failure. ROS cause damage to lipid cell membranes in the process of lipid peroxidation. In this process, several aldehydes, including 4-hydroxy-2-nonenal (HNE), are generated and the amount of HNE is increased in the human failing myocardium [Figures 2(B,E)] [6,17]. The presence of 8-OHdG has also been detected in nuclei of cardiac myocytes in patients with dilated cardiomyopathy (DCM) [Figures 1(C,D) [18]. Therefore, levels of oxidative stress are elevated in both body fluid including serum, urine and pericardial effusion and myocardium of patients with heart failure.

HNE is recognized not only as a reliable marker of oxidative stress but also as a toxic aldehyde to many types of cells [1,24-26]. HNE exhibits cytopathological effects, such as enzyme inhibition and inhibition of DNA, RNA and protein synthesis. HNE exacerbates heart failure. Administration of HNE was found to cause contractile failure and to elicit proarrhythmic effects in hearts [27,28]. HNE also has pro-oxidant properties.

HNE can markedly induce intracellular production of ROS in cultured rat hepatocytes and human neuroblastoma cells [26,29,30]. HNE also exacerbates the formation of ROS, especially H2O2 and ·OH, in cardiomyocytes and subsequently ROS cause intracellular Ca2+ overload (Figure 3) [21]. Therefore, HNE exacerbates heart failure by increasing oxidative stress in the myocardium. Angiotensin II [9-11], catecholamines [6-8], tumor necrosis factor-alpha (TNF-alpha) [9] and ischemia [12] induce generation of ROS in the myocardium (Figure 4). ROS cause HNE formation in the process of lipid peroxidation. HNE inversely induces generation of ROS. In this way, a vicious cycle of oxidative stress is formed in the failing myocardium (Figure 5). Terminating this vicious cycle may be important to reduce oxidative stress in the failing myocardium.

Different oxidative stress levels stimulate cellular proliferation, trigger apoptosis or produce necrosis in various cells [1,31]. Experimental studies have shown that ROS can exert a graded effect on the cardiac myocyte phenotype [7,32]. Lower levels of oxidative stress stimulate hypertrophy and higher levels of oxidative stress induce apoptosis [7,32]. Higher rates of ROS production contribute to the transition from compensatory left-ventricular hypertrophy to heart failure [33,34]. We previously reported that oxidative stress was elevated in myocardia of patients with hypertrophic cardiomyopathy and that the levels were correlated with left ventricular dilatation and systolic dysfunction [17]. Thus, graded effects of ROS on the myocyte phenotype may be present in clinical settings. Further studies are needed to clarify this point.

3.1. Reduction Effect of a Beta-blocker on Oxidative Stress in Patients with Heart Failure

Results of many clinical trials, including the US Carvedilol Heart Failure Study, CIBIS-II and III, MERIT-HF, CARMEN, MUCHA, COMET, COPERNICS and REVERT have supported the efficacy of three beta-blockers (carvedilol, metoprolol and bisoprolol) in the treatment of heart failure. These studies have revealed that both ß1 adrenoreceptor blockers (metoprolol and bisoprolol) and a nonselective ß1 and ß2 adrenoreceptor blocker (carvedilol) ameliorate cardiac function and mortality in patients with heart failure. One of the mechanisms is thought to be reduction effect of a beta-blocker on oxidative stress. Kukin et al. reported that both metoprolol, a β1-selective blocker, and carvedilol, an α and β blocker with antioxidant activity, reduced plasma lipid peroxidation in patients with heart failure, together with amelioration of heart failure [35]. Chin et al. reported that β-blockers (bisoprolol and carvedilol), reduced the levels of serum lipid hydroperoxides in patients with CHF [36]. The serum levels of 8-OHdG in patients with DCM significantly decreased by 19% (Figure 1B) [18]. Thus, treatment with a beta-blocker can reduce systemic levels of oxidative stress, along with amelioration of heart failure.

A beta-blocker decreases elevated oxidative stress not only in serum or plasma but also in the human failing myocardium [6]. Endomyocardial biopsy samples from 11 patients with DCM were examined before and after treatment (mean, 9 ± 4 months) with carvedilol (5 to 30 mg/day; mean dosage, 22 ± 8 mg/day). After treatment with carvedilol, myocardial HNE-modified protein levels decreased by 40% along with amelioration of cardiac function (Figures 2B,D,F) [6]. Since HNE is a cytotoxic product, the reducing effects of carvedilol may play a critical role in amelioration of heart failure.

3.2. Mechanism of Reduction of Oxidative Stress by Beta-blocker Therapy

This reduction can be caused by several possible mechanisms.

Direct antioxidative property of carvedilol. The direct antioxidative property of carvedilol may contribute to the reduction of oxidative stress. Carvedilol inhibited Fe2+-initiated lipid peroxidation in vitro, but propranolol did not [39]. The mechanism of inhibition is via scavenging free radicals [39]. Carvedilol prevented hydroxyl radical-induced cardiac contractile dysfunction in human myocardial tissue, but metoprolol did not [40]. These results suggest the possible importance of the use of carvedilol.

Emerging studies have revealed that β adrenergic receptor polymorphism may have an impact on response of β blocker treatment in patients with heart failure [43,44]. For example, there is a polymorphism at amino acid residue 389 (Arg/Gly) in human adrenergic β1-receptor gene (ADRB2). Mialet Perez et al. reported that homozygosity for Arg389 was associated with improvement in ventricular function during carvedilol treatment in 224 patients with heart failure [43]. A large clinical trial and further experimental examinations are needed to clarify this response. Determination of whether antioxidative effects of β blockers are different between Arg389 and Gly389 may be important.

Beta-blocker as a Possible Antioxidant in Treatment for Heart Failure

Depressed cardiac function causes activation of the sympathoadrenal system (ANS) and rennin-angiotensin-aldosterone system (RAAS) and elaboration of cytokines such as TNF-alpha [52]. All of these ischemia, tachycardia or hypertension increased ROS generation in the human failing myocardium (Figure 5). Catecholamines generate ROS via β1-AR, and beta-blockers, including metoprolol, carvedilol and bisoprolol, can therefore decrease ROS generation in the heart. Furthermore, carvedilol can scavenge redundant ROS and can terminate the vicious cycle such as oxidative stress caused by the cytotoxic aldehyde, HNE. ROS cause remodeling, hypertrophy, fibrosis, apoptosis and calcium overload and induce arrhythmia [53], which in turn depresses cardiac function. Beta-blockers such as metoprolol, bisoprolol and carvedilol can stop those vicious cycles in patients with heart failure via indirect or direct anti-oxidative properties. 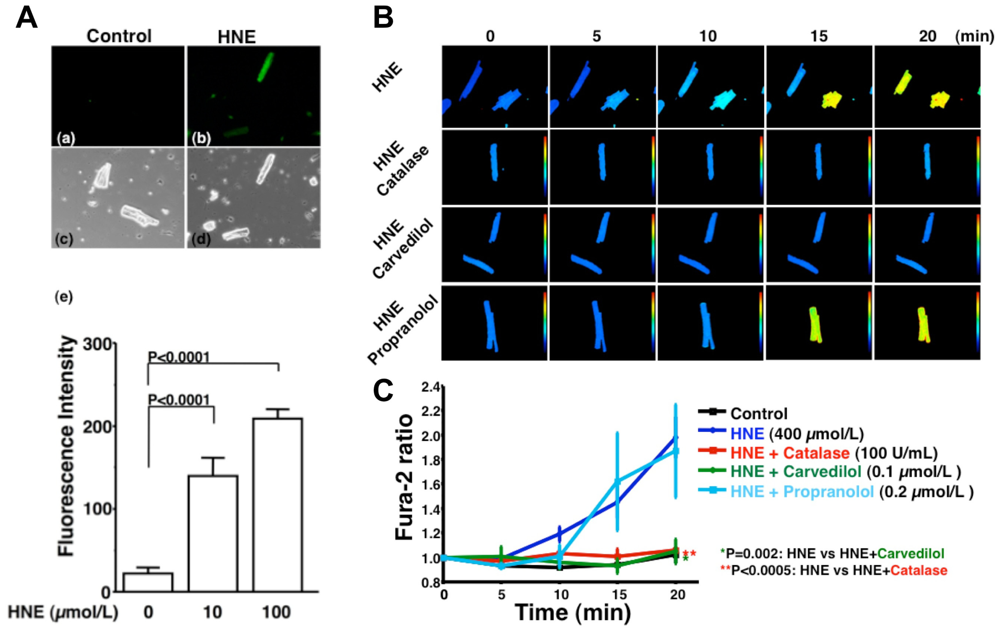 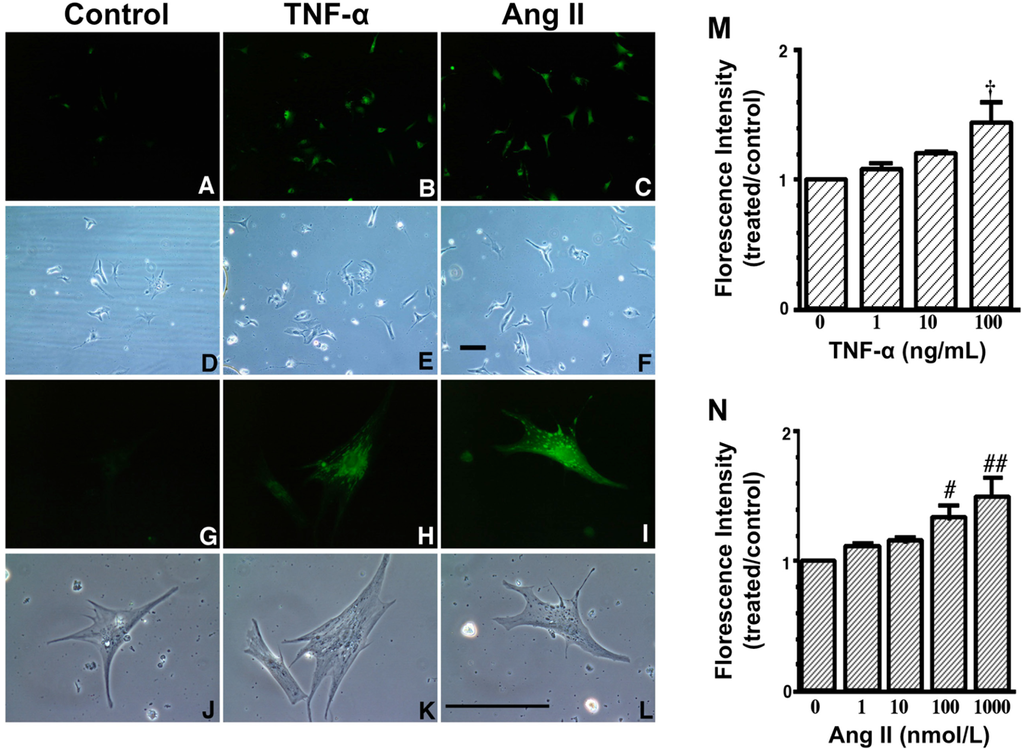 A to L. Increase in fluorescence with 2′,7′- dichlorofluorescin diacetate (DCFH-DA) due to TNF-α and Ang II exposure. These are representative living cardiac myocytes observed by fluorescence microscopy (A–C, G–I) and phase contrast microscopy (D–F, J–L). On culture day 4, cultured cardiac myocytes on glass cover slips were treated with a diluent (control) (left: A, D, G and J), TNF-α (10 ng/mL) (middle: B, E, H and K) or Ang II (100 nmol/L) (right: C, F, I and L) and with DCFH-DA (5 μmol/L). Treatment time was 1 hour. Upper two lanes (A–F) at low magnification and lower two lanes (G–L) at high magnification. Bar = 100 μm. M and N, Dose-dependent increase in fluorescence due to TNF-α and Ang II exposure. On culture day 4, cultured cardiac myocytes were treated with TNF-α (1 to 100 ng/mL), Ang II (1 to 1000 nmol/L) or a diluent without TNF-α and Ang II (control) and simultaneously with 2′,7′- dichlorofluorescin diacetate (DCFH-DA) (1 μmol/L). After 1 hour of incubation, cells were collected and fluorescence intensity per culture well was measured. Each point is the mean ± SE (n = 5 experiments). In each experiment, a treated-to-control ratio was calculated from the fluorescence intensity of five experiments. † P < 0.005, # P < 0.01, ## P < 0.0005 vs control cultures treated with diluent only. These data indicate that both TNF-α and Ang II generate ROS in cardiac myocytes. 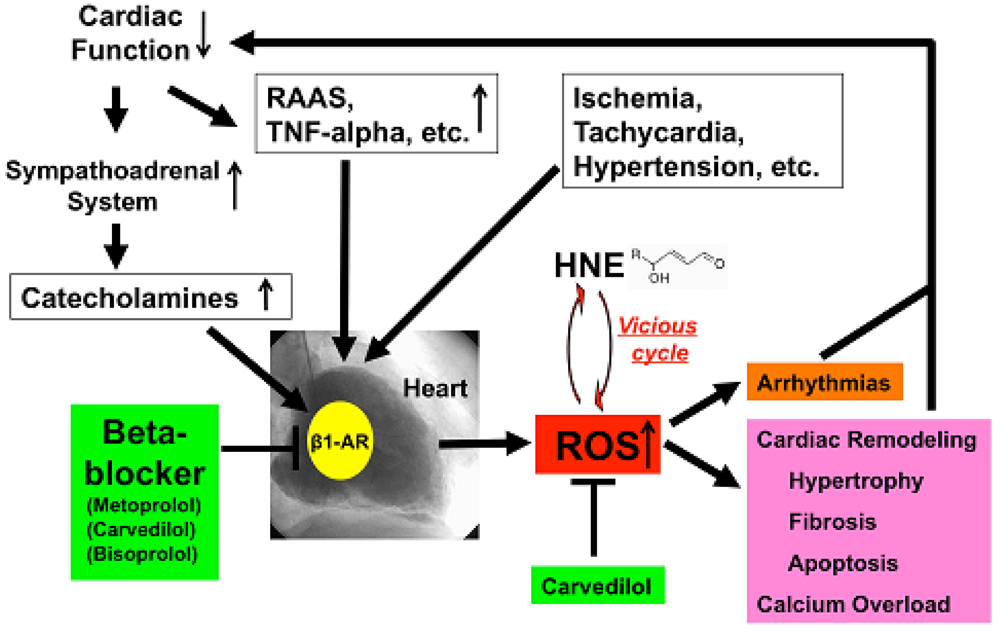