Pharmacogenetics of Anti-Diabetes Drugs
Next Article in Special Issue

Clinical Pharmacokinetics of Penicillins, Cephalosporins and Aminoglycosides in the Neonate: A Review

Mechanism of Allosteric Modulation of the Cys-loop Receptors 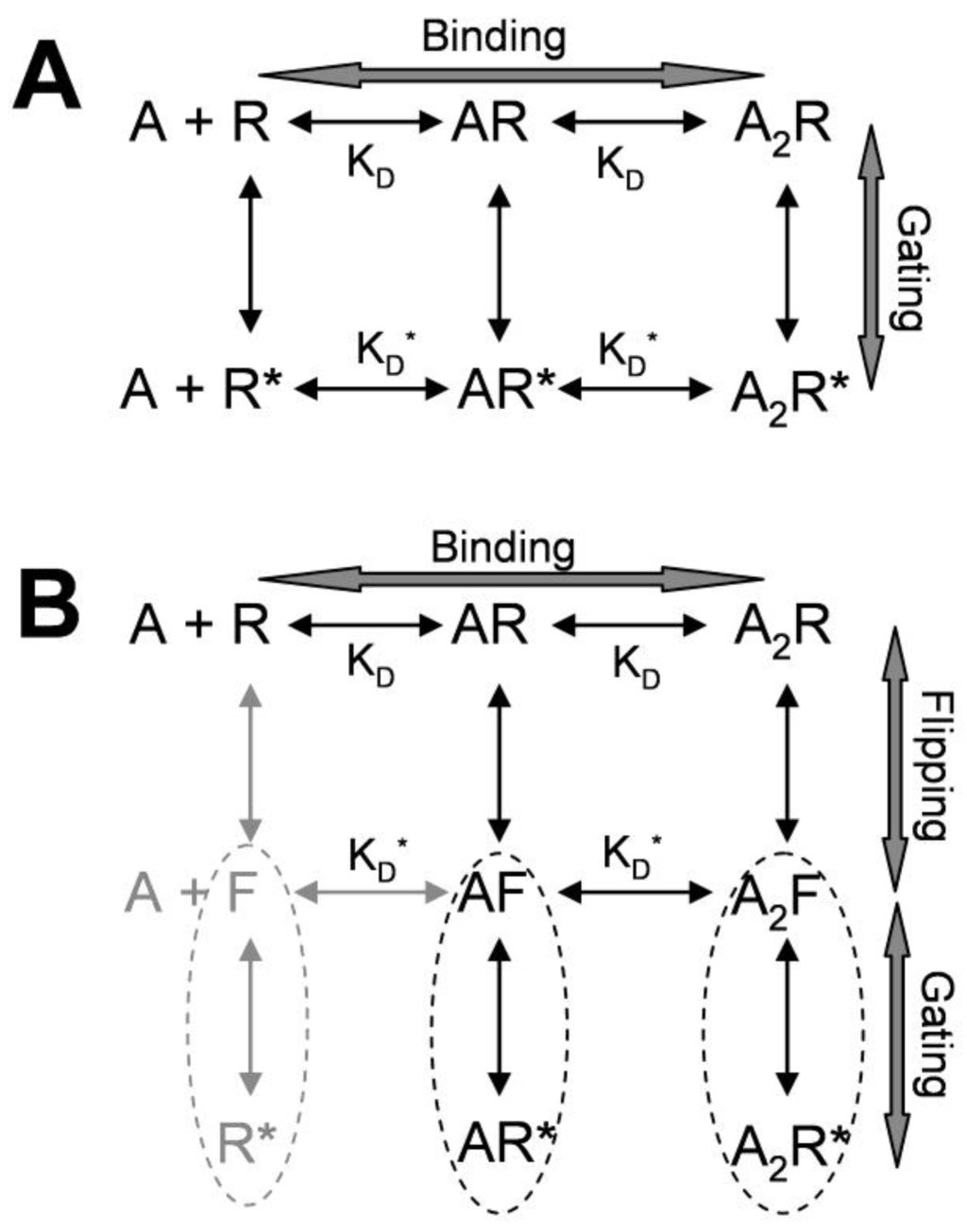 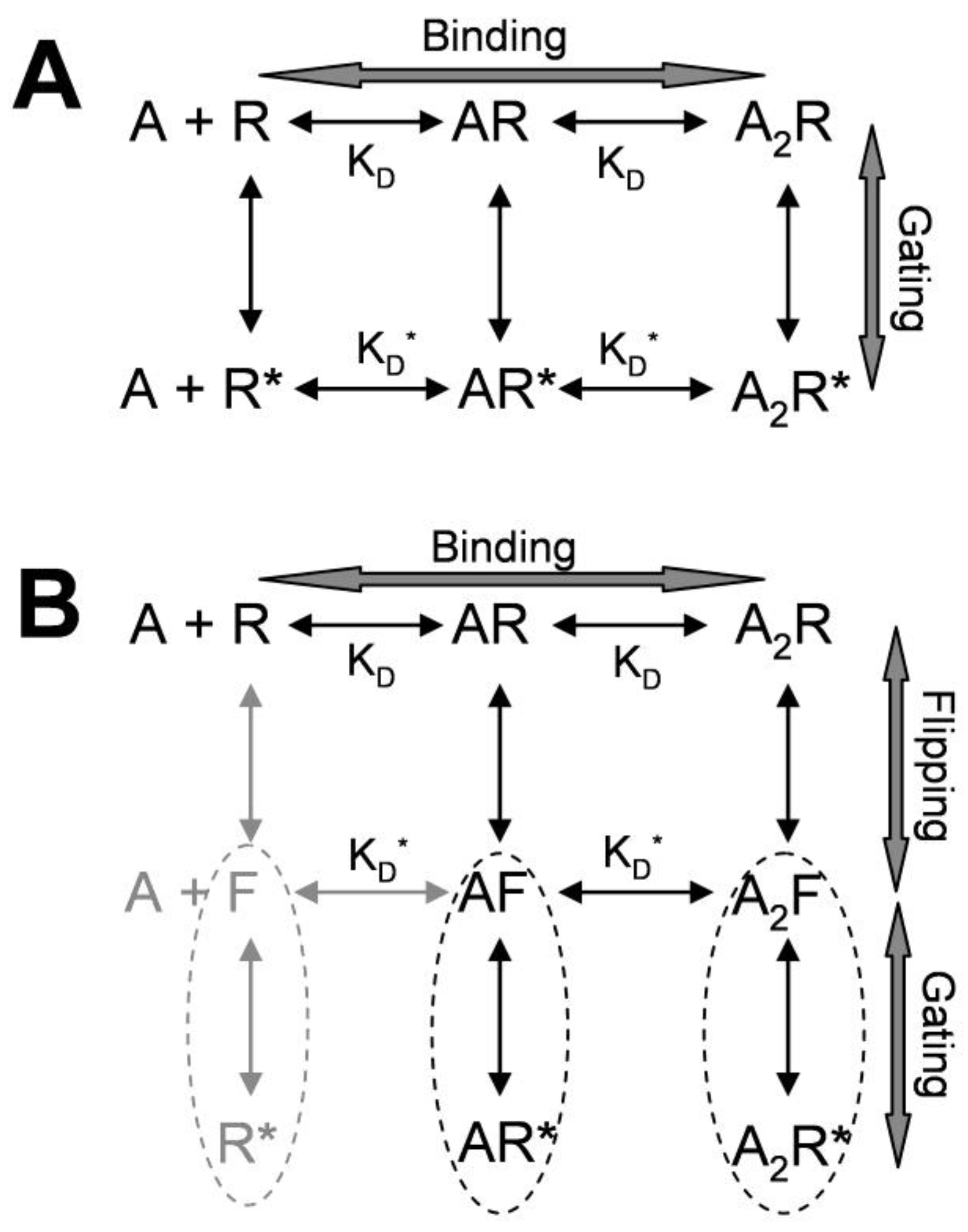 An important feature of this model is that the receptor has low affinity (KD) resting closed states and high affinity (KD*) open states [22,33]. Binding of the receptor to its agonist facilitates transitions from low affinity states to high affinity states. This model can explain how mutations in the channel gate make the receptor more sensitive to agonist. That is, loosening the channel gate would increase spontaneous openings, resulting in more receptors in the high affinity states, and thus increasing sensitivity of the receptor to agonists. This mutational effect is similar to the effects of positive allosteric modulators (see below). The MWC model was further refined by the finding that partial and full agonist-induced openings have similar opening and closing rates, but with a major difference in equilibrium distribution between resting state and “flipped” state, a pre-opening intermediate state with higher affinity. For a full agonist, the equilibrium constant for flipping is large, so that most fully liganded receptors will shift to the flip state. For a partial agonist, the equilibrium constant is small, so that a smaller fraction of fully-liganded receptors will transit to the flip state. However, once the receptor transitions to a flipped state, full and partial agonists will gate the channel similarly. Thus, there is a high affinity “flip” state between low affinity resting state and high affinity open state (Figure 2B;[34]). The pre-opening flip state is an agonist-induced conformational state preceding channel opening. In this sense, the flip state and open state of the receptor could be collectively considered as “activated states” (as enclosed in the dashed ovals in Figure 2B). Note that in the kinetic scheme of Figure 2B, there is no connection between open states. This is because association to, and dissociation from, the open states are rare events, and adding connections between open states does not produce any detectable improvement in fitting [29]. Thus, agonist association and dissociation rates for the open states are much smaller than those for binding in the flip state or resting state. The molecular basis for the scarcity of transitions between open states is still not clear. One possible explanation is that the open states could have even higher affinity than the flip states, so that further binding pocket closure would limit association and dissociation. Detailed descriptions of the evolving kinetic and activation mechanism models can be found in several recent review papers [21,24,25,26,27].
In summary, kinetic studies revealed that binding and gating are coupled, with mutual influence. The receptor’s affinity for agonists is state dependent. Alteration of the receptor distribution across different conformational states, either by mutation or by allosteric modulator binding, alters the distribution of receptors across different agonist affinity states. These alterations change the apparent affinity of the receptor for its agonists. This concept forms the foundation of allosteric modulation. 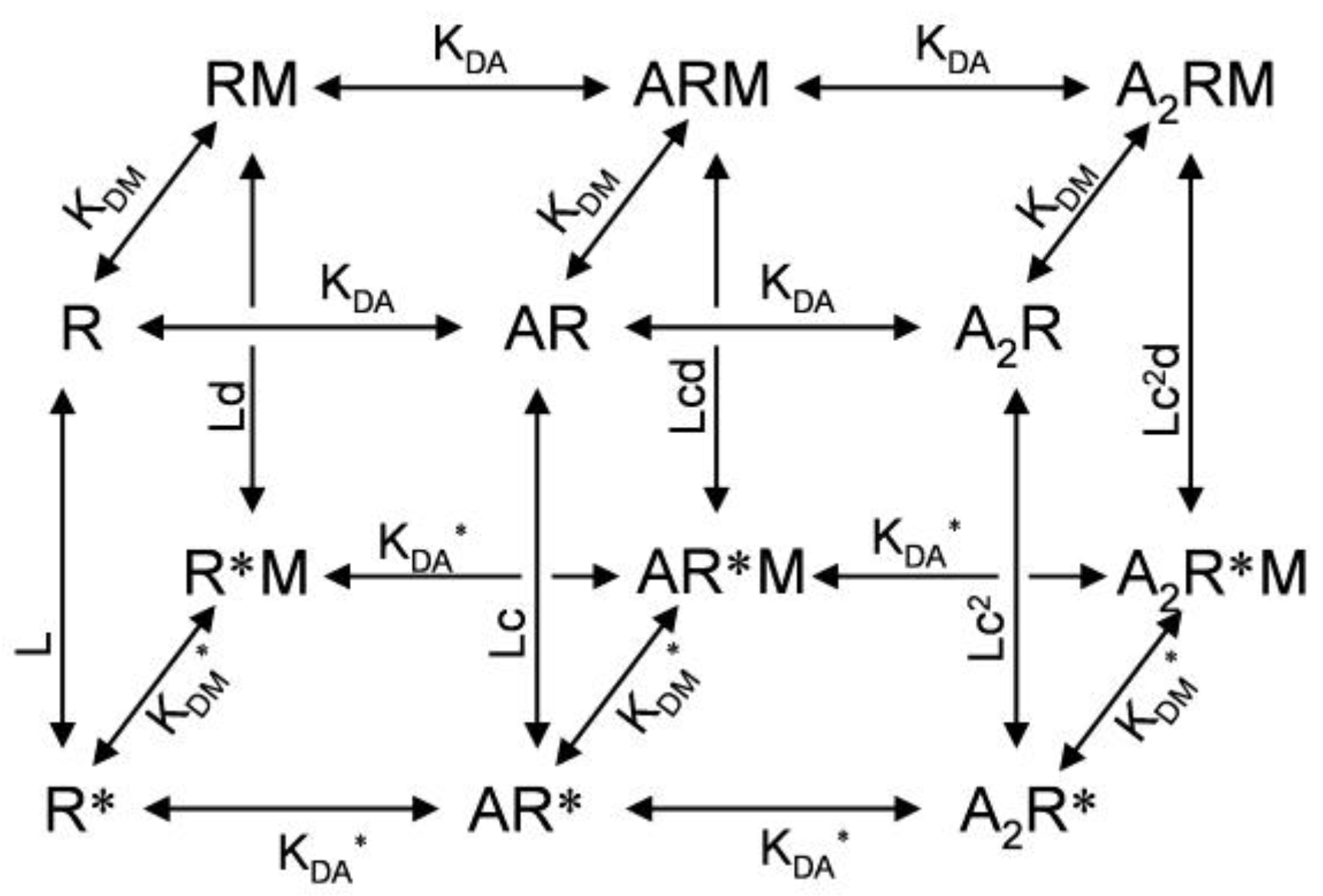 This co-activation mechanism of GABAARs by benzodiazepines seems to be applicable to other allosteric modulators acting on different sites. For example, the general anesthetic etomidate potentiates GABAA receptor agonist responses at low concentrations, but directly activates the GABAA receptor at high concentrations. At the same time, high concentration etomidate also further shifts the GABA concentration-response curve to the left. Both potentiation and activation effects can be well described by a single MWC kinetic model [39], similar to that for benzodiazepines. Affinity labeling has identified the binding site of etomidate in the transmembrane domain (Met236 in the M1 domain of α1 subunit and Met286 in M3 domain of β2 subunit) [40]. The allosteric effect of etomidate can be mimicked by two substitutions at these sites with the bulky residue tryptophan [41]. In contrast, the benzodiazepine binding pocket is located in the amino-terminal domain (see section 4.1). Thus, regardless the location of the binding site, in the amino-terminal domain distant from the channel gate or in the transmembrane domain close to the channel gate, the binding of allosteric modulators to their sites alters the channel gating. Positive allosteric modulators reduce the gating energy barrier to facilitate channel opening, serving as weak co-agonists (binding to a site that is distinct from the orthosteric neurotransmitter binding site). Conversely, negative allosteric modulators increase the gating energy barrier to inhibit channel opening. For example, ρ1 GABAC receptor function can be inhibited by several neurosteroids [42]. These neurosteroids inhibit the GABAC receptor allosterically as suggested by monitoring conformational changes with site-specific fluorescence techniques [43]. However, the mechanisms of GABAC receptor inhibition by individual neurosteroids are not the same. Functional inhibition by β-estradiol is correlated to the inhibition of the GABA-induced fluorescence changes in multiple locations of the amino-terminal domain, including at K217C in loop F, L166C in loop E, and L66C away from the binding loops, [43]. This suggests that β-estradiol can antagonize GABA-induced conformational changes. In contrast, pregnanolone, pregnanolone sulfate, allo-pregnanolone sulfate, and tetrahydrodeoxycorticosterone influence GABA-induced fluorescence changes differently, suggesting distinct detailed structural mechanisms [43]. Note that some competitive antagonists could be very weak agonists or inverse agonists. However, since they compete with agonist for the same binding site, their modulatory effect on the agonist response could only be seen at very low concentrations when the agonist concentration is also very low, with low probability of mutual competition. In any case, since these competitive antagonists compete with agonists for the same orthosteric binding site, they are not allosteric modulators.
Since nicotinic receptors have an allosteric activation mechanism similar to that for GABAA receptor [22], they likely have a similar allosteric modulation mechanism. In fact, the allosteric modulator PNU-120596 for α7 nicotinic receptor has its binding site in the transmembrane domain [44] (see Section 4.2 for details), but it can induce a similar, though not identical, conformational change along the activation pathway as acetylcholine-induced conformational changes during channel activation [45]. Similarly, allosteric modulation by divalent cations of nicotinic receptors involves conformational changes in the amino-terminal domain, partially shared with agonist-induced conformational changes [46]. These experimental observations further support a co-agonist action for positive allosteric modulators in nicotinic receptors.
In glycine and GABA receptors, alcohol size cut-off (see Section 4.2 for a fuller explanation) is related to the size of the sidechain of two residues in the transmembrane domains (M2 and M3, see Section 4.2 for details), suggesting a transmembrane location of their binding site. However, the structure of loop 2 from the amino-terminal domain, which plays an important role in coupling agonist binding and channel gating, is also critical for ethanol’s effect [47,48]. Whether loop 2 and its surrounding residues form a second binding site for ethanol is still not clear. Ethanol’s modulatory effect on glycine receptor can also be influenced by a third site within the intracellular loop between M3 and M4, which modifies ethanol’s effect by interacting with G protein subunits [49]. Thus, it is likely that the allosteric modulation of receptor function by ethanol is through co-agonism with ethanol binding to one site in the M2 and M3 domains, and that this co-agonist effect can itself be allosterically modulated by other allosteric modulators, such as G protein interacting with the M3–M4 site, or by mutations of important residues along the activation pathway, such as in loop 2.
In summary, several lines of evidence suggest that allosteric modulation of cys-loop receptor function is mediated mainly through a weak direct gating effect by allosteric modulators.

As just described, allosteric modulators of cys-loop receptors can bind in two major locations. The first location is at subunit interfaces of the amino-terminal domain, homologous to the orthosteric agonist binding sites, but at a different subunit interface. Benzodiazepine agonists, partial agonists, antagonists, partial inverse agonists, and inverse agonists bind to sites in this category. We will describe the amino-terminal binding sites for allosteric modulators in Section 4.1. The second major location of allosteric modulator binding sites is in the transmembrane domain near the channel gate. Barbiturates, neurosteroids, alcohols and general anesthetics bind to sites of this type. We will describe the transmembrane binding sites with several examples in Section 4.2. Noncompetitive antagonists also bind to the transmembrane domain. Some of them have binding sites within the pore. Thus, binding of these antagonists will occlude the channel pore. The effects of these channel blockers are usually use-dependent. That is, the binding site is only accessible in the open state. Other noncompetitive antagonists allosterically inhibit channel activity. It is also possible that a single antagonist can block the pore, and simultaneously allosterically inhibit channel function. This may explain a small shift in concentration-response curve sometimes observed in the presence of noncompetitive antagonist. Picrotoxin is an example of a pore blocker, although the mechanism of its non-competitive antagonism is still not fully understood. Three studies suggest that it can actively antagonize conformational changes induced by GABA in the amino-terminal domain; suggesting that, in addition to blocking the pore, picrotoxin also negatively modulates channel gating and facilitates channel closing [43,50,51].
In addition to these two major binding sites, residues in the coupling region between the agonist binding site and the channel domains may also be involved in mediating allosteric modulation. For example, mutations of the Gly219 residue in the pre-M1 region of the GABAA receptor β2 subunit can abolish the effect of several allosteric modulators, such as barbiturates, alphaxalone, etomidate and propofol [52]. The pre-M1 residue Arg246 of the 5-HT3A receptor is also an important determinant for allosteric modulation [53]. Another example is that the zinc modulation of GABAA receptors involves two charged residues located in the cys-loop region [54] that plays an important role in coupling the amino-terminal domain to the channel gate [55,56].

Since most heteromeric cys-loop receptors have only two orthosteric binding sites for agonists, there is a lot of potential for future drug development in the remaining subunit interfaces that do not bind conventional agonists. The best-characterized example of an allosteric site in amino-terminal domain is the benzodiazepine binding pocket of GABAA receptors. It is located in the α−γ subunit interface, homologous to the GABA binding site in the β−α subunit interface (Figure 1D). The benzodiazepine binding pocket is formed by residues in six binding loops, designated as loops A through F, and homologous to those that form the orthosteric binding pockets. Residues (with rat α1 subunit numbering) identified from Loops A (His101 [57,58], B (Tyr159 [59]), and C (Gly200 [60], Thr206, and Tyr209 [59,61]) are contributed by the α subunit and form the principal face of the binding pocket. Residues in loops D (Phe77 [62,63], Ala79, Thr81 [64,65]), E (Met130 [63,66]), and F (Glu189, Thr193, and Arg194 [67]) are contributed by γ2 subunit and form the complementary face of the binding pocket (Figure 4).
For nicotinic receptors, a recent study shows that there is an amino-terminal noncanonical allosteric site for the positive allosteric modulator morantel in the α3β2 subtype [68]. This binding site for the allosteric modulator is located in the β−α subunit interface (Figure 4), in contrast to the α−β interface for the ACh binding site (Figure 1D). Note that binding residues identified for morantel are located what is equivalent to the upper half of the homologous orthosteric binding pocket. 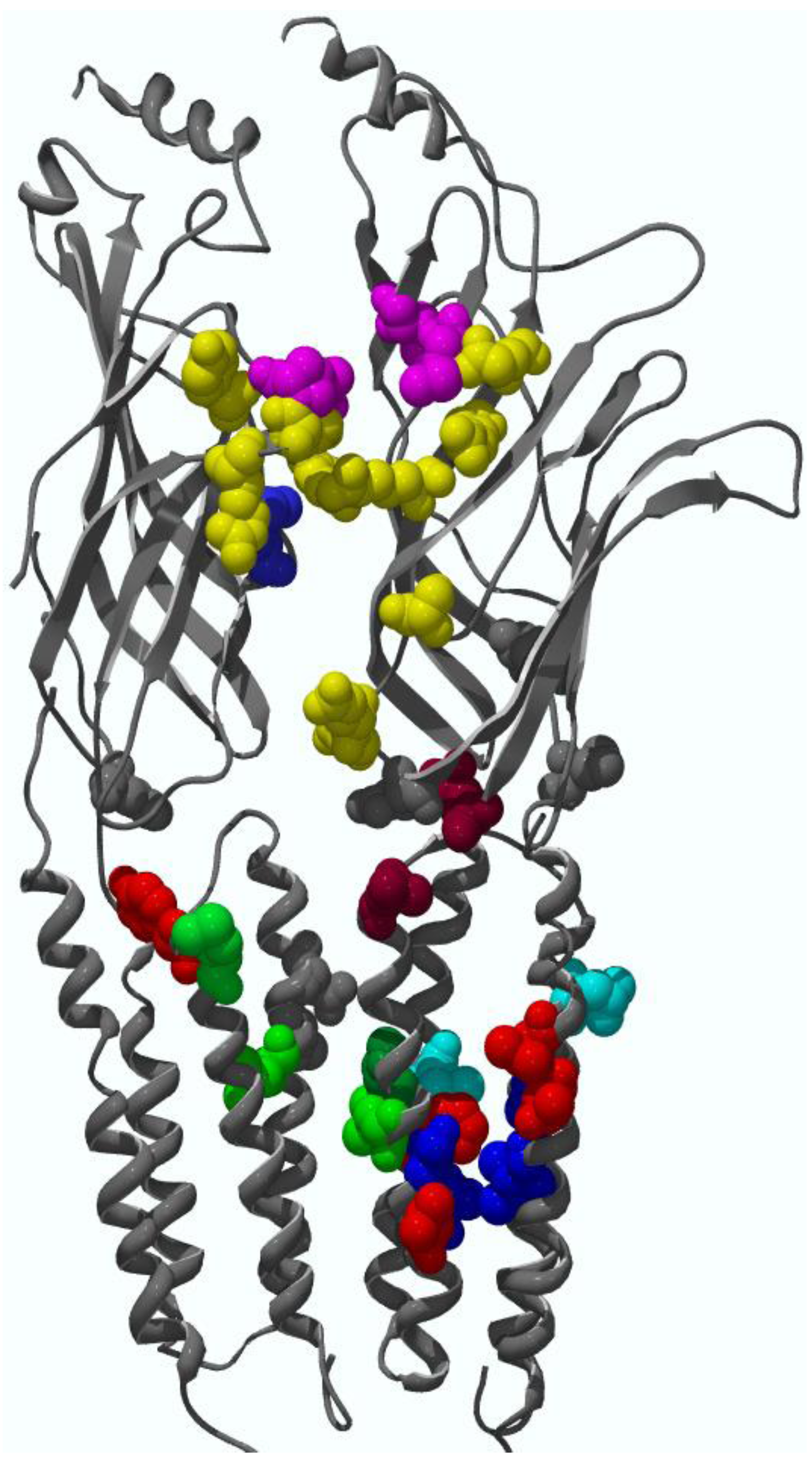 This work is supported by the Barrow Neurological Foundation and NIH R01GM085237 grant to YC.

© 2010 by the authors; licensee MDPI, Basel, Switzerland. This article is an open-access article distributed under the terms and conditions of the Creative Commons Attribution license (http://creativecommons.org/licenses/by/3.0/).