Identification of Cyclic Sulfonamides with an N-Arylacetamide Group as α-Glucosidase and α-Amylase Inhibitors: Biological Evaluation and Molecular Modeling
Previous Article in Journal

Therapeutic drug monitoring (TDM) is an effective tool used to improve the pharmacological treatment in clinical practice, especially to detect subtherapeutic drug plasma concentration (Cp) in order to consider a change of dosage during treatment and reach its putative therapeutic range. In this study, we report the Cp values of lithium and valproic acid (VPA), alone and in combination, mostly in bipolar patients admitted to an Italian clinical center of the University of Pisa during the years 2016–2020, which include 12,294 samples of VPA, 7449 of lithium and 1118 of both in combination. Lithium and VPA are the most utilized drugs in treating bipolar disorders, and their TDM is strongly recommended by recent guidelines. In relation to lithium Cp monitoring, several studies have underlined that 0.5–0.8 mmol/L is the optimal range for chronic treatment, and below 0.4 mmol/L, it is unlikely to produce a clinical response. For VPA, the therapeutic range is 50–100 μg/mL and a linear correlation between Cp and clinical efficacy has been proposed, where below 50 μg/mL, the clinical efficacy of VPA has not been proven thus far. Toxic levels of both drugs were rarely found in our study, while a high percentage of patients, about one-third, had sub-therapeutic Cp during their treatments. In addition, in several cases of patients receiving multiple blood sampling, the initial subtherapeutic Cp changed only partially without reaching its therapeutic window. In relation to age, we found a higher percentage of lithium and VPA Cp values in range in the adolescents than in the adults and elderly groups. No differences were reported when analyzing the distribution of Cp values in males and females. In conclusion, this present study suggests that TDM is widely used by many specialists, but there is still a window of improvement for optimizing pharmacological treatments in clinical practice. View Full-Text
Keywords: lithium; valproic acid; therapeutic drug monitoring; subtherapeutic dose lithium; valproic acid; therapeutic drug monitoring; subtherapeutic dose
►▼ Show Figures 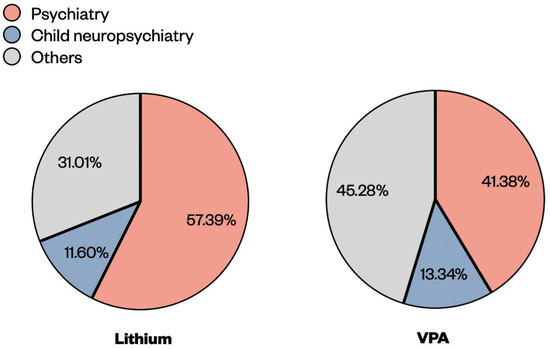