Development, Optimization and Characterization of Eudraguard®-Based Microparticles for Colon Delivery

Development of pH-dependent systems for colon delivery of natural active ingredients is an attractive area of research in the field of nutraceutical products. This study was focused on Eudraguard® resins, that are methacrylate copolymers approved as “food grade” by European Commission and useful for the production of food supplements. In particular, Eudraguard® Biotic (EUG-B), characterized by a pH-dependent solubility and Eudraguard® Control (EUG-C), whose chemical properties support a prolonged release of the encapsulated compounds, were tested. To obtain EUG microparticles, different preparation techniques were tested, in order to optimize the preparation method and observe the effect upon drug encapsulation and specific colonic release. Unloaded microparticles were initially produced to evaluate the influence of polymer characteristics on the formulation process; subsequently microparticles loaded with quercetin (QUE) as a low solubility model drug were prepared. The characterization of microparticles in the solid-state (FT-IR spectroscopy, differential scanning calorimetry and X-ray diffractometry) indicated that QUE was uniformly dispersed in a non-crystalline state in the polymeric network, without strong signs of chemical interactions. Finally, to assess the ability of EUG-C and EUG-B to control the drug release in the gastric environment, and to allow an increased release at a colonic level, suitable in vitro release tests were carried out by simulating the pH variations along the gastro-intestinal tract. Among the evaluated preparation methods, those in which an aqueous phase was not present, and in particular the emulsion-solvent evaporation method produced the best microparticle systems. The in vitro tests showed a limited drug release at a gastric level and a good specific colon release. View Full-Text
Keywords: food-grade acrylate polymers; quercetin; DSC; FT-IR; PXRD; enteric release; drug delivery food-grade acrylate polymers; quercetin; DSC; FT-IR; PXRD; enteric release; drug delivery
►▼ Show Figures 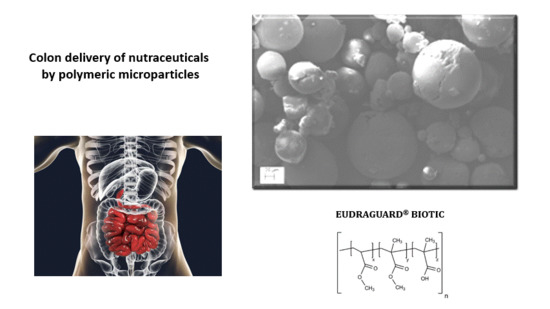