The equation of motion of a resonator is modeled as a spring-mass-damper system and described as a second-order differential equation as shown in (1): where x is the displacement of resonator, d is the normalized damping coefficient, ωn is the natural frequency, and f is control input.

The control input used to excite the resonator at constant amplitude, X0, while tracking the resonant frequency of the resonator is given by: where A is the magnitude of the input and θ is the instantaneous phase of the input. The magnitude should be chosen to make the difference between the measured and the specified amplitude, X0, equal to zero. Therefore, A should have an AGC form. On the other hand, cosθ should have a PLL form because it should recognize the resonance when the difference in phase angle between a control input and a displacement is 90°.
The AGC is composed of a rectifier, a low-pass filter, and a comparator [1]. However, in order to precisely maintain the specified amplitude, X0, we employ a proportional-integral control in the AGC. The proposed AGC in this paper is as follows: where Kp is the proportional control gain; KI is the integral control gain; r is an estimation of the amplitude of x, which is the low-pass filtered value of the absolute value of x; and λa is the corner frequency of the low-pass filter. np is the displacement measurement noise and is assumed to be a white Gaussian noise with zero mean and power spectral density (PSD) of .
A PLL is composed of a phase detector, a PLL controller, and a voltage-controlled oscillator (VCO). Each can be written as follows [2]: where cosθ is the output of the VCO. The instantaneous phase angle, θ, is the integral of the instantaneous frequency ω, which is the sum of a proportional value of the control voltage of VCO, z, and the free oscillation frequency, ω0. The VCO control voltage, z, is the integral of the output of the phase detector y, which is the calculated difference in phase between the output of the VCO and the displacement, and is given as the low-pass filtered value of cosθ multiplied by the displacement. In (4), Kv and Kz are the gains of VCO and integral control, respectively, and λp is the corner frequency of the low-pass filter. Figure 1 shows a block diagram of the frequency tracking and amplitude control composed of an AGC and a PLL.

This section follows the formulation in [1,2] and employs the averaging method to analyze the stability of the feedback system depicted in Figure 1 with respect to the design parameters: the control gains Kp and KI of AGC, the control gains Kv, Kz of PLL, and corner frequencies λa, λp of the low-pass filter.
Transforming of the displacement and velocity, x and ẋ, to the amplitude, a, and the phase angle, ϕ, and applying them to the feedback system composed of (1), and controllers (2), (3), and (4) yield:
In (7), r denotes the estimate of the amplitude of x, so r ≥ 0, and the noise term can be separated by using |x + np| ≤ |x| + |np|. The mean value of |np|, which is denoted as n0, is calculated as:
If mp is defined as: the mean value of mp is zero, and the PSD of mp and the correlation of mp and np are given by: where the bar denotes the stochastic expectation. With (10), (7) can be rewritten as:
Equations (5)–(8) are simplified to a general stochastic nonlinear state space equation as follows. where:
A first-order approximation of the Taylor series expansion of the nonlinear function f1(x1) in (13) about the mean, x̄1, yields a time update of expectation as follows:
Since θ changes much faster than other variables, the averaging method can be applied to (15), and the averaged dynamic equations are obtained as follows: where subscript, av, denotes the averaged value. Equation (16) can be written in detail as follows.
An equilibrium point of (16) is:
The Jacobian matrix of the averaged system (16) at the equilibrium point is:
The conditions for the above Jacobian matrix to be stable are:
Equation (18) is the stability criteria of the control system and can be used for selecting control parameters for achieving stability. The left-hand side of (18) consists of the design parameters related only to AGC, while the right-hand side consists of the design parameters related only to PLL. Therefore, we can design each controller separately. If the control system is stable, θ̇ = ωn is achieved and the excitation frequency tracks the resonant frequency, ωn. In addition, since ā0 = X0 − n0π/2, the amplitude converges to the spcified value, X0, with a small deviation due to the displacement measurement noise.

As seen in the previous section, the displacement measurement noise not only causes errors in the amplitude control, but also affects the resolution of the resonant frequency tracking. Applying the covariance propagation equation, this section describes the effects of displacement measurement noise on the resolution of the resonant frequency tracking controller. The covariance propagation equation of (13) is defined as:
Expanding above equation using the Taylor series at the mean, x̄1, and obtaining a first-order approximation yields the covariance propagation equation as follows [3]: where the PSD of measurement noise vector, S, is given by:
Applying the averaging method to (20) yields the covariance equations for (13) at steady state as: where F1 is defined in (17) and:
The standard deviation, which is the averaged resolution of excitation frequency in the frequency tracking control, is derived as: where P1(5,5) denote (5,5) terms of the numerical solution of (22).

Similarly to the previous section, transforming of the displacement and velocity, x and ẋ, to the amplitude, a, and the phase angle, ϕ, and applying them to the feedback system composed of (1), and controllers (3), (25), and (26) yields. where (29) is identical to (7), and Δω̃ = Δω − Δω̂ denotes the estimation error. Equations (27) (30) are simplified to a general stochastic nonlinear equation as: where:
Similarly to the previous section, an approximated time update of expectation of (31) is obtained as follows:
Applying the same method yields the nonlinear averaged dynamics of (33) as: or in detailed forms as:
An equilibrium point of (34) is:
The Jacobian matrix of the averaged system (34) at the equilibrium point is:
The conditions for the above Jacobian matrix to be stable are:
If the feedback system is stable, actual resonant frequency is tuned to the specified resonant frequency since is achieved.

Similarly to the previous section, applying the averaging method yields the following steady state covariance equation for (31): where F2 is defined in (35) and:
The standard deviation, which is the averaged resolution of the frequency compensation in the frequency tuning control, is derived as: where P2(5,5) denote (5,5) terms of the numerical solution of (37).

4. Application to the Drive Axis of a Dual-Mass Gyroscope

In general, a dual-mass gyroscope has two proof-masses linked to each other by a mechanical beam and is designed to oscillate in anti-phase with the same resonant frequency and amplitude [5]. The Coriolis force acts along opposite directions for each of the two masses, and an external force acts in the same direction, enabling cancellation of the acceleration and other common mode effects. However, because of issues such as the difficulties in the drive axis alignment due to the connecting beam, possibility of unexpected vibration mode, and high production cost induced by high precision process, it has been proposed to remove the connecting beam and have the controller oscillate the two masses in anti-phase with the same resonant frequency and amplitude [6].
To evaluate the control performance, the proposed control algorithms are applied to the drive axis of a dual-mass gyroscope without a mechanical linkage between the proof-masses. The equation of motion for the drive axis of a dual-mass gyroscope is described by two second-order differential equations as follows: where subscript 1 and 2 denote the first and the second proof-mass, respectively, x1, x2 are the displacements of each proof-mass, d1, d2 are normalized damping coefficients, ω1, ω2 are natural frequencies, and f1, f2 are control inputs.
The first proof-mass is set as the leading resonator, and the second one is set as the following resonator, which precisely traces the oscillation pattern of the leading resonator. The proposed frequency and amplitude controls are applied to each mass. The dual-mass gyroscope parameters are taken from a prototype fabricated at Sejong University, and the parameters are:
Considering likely manufacturing errors, 10% error is added to ω1 for ω2 calculation, and 10% error is added to d1 for d2 calculation. The PSD of the displacement measurement noise is assumed to be . The control law applied to the first proof-mass is frequency tracking and amplitude control and is written as: where A1 and θ1 are calculated from (3) and (4), respectively. The control law for the second proof-mass is frequency tuning and amplitude control. In anti-phase, the second proof-mass should oscillate with the same resonant frequency as the first proof-mass, so the control law (25) is modified as: where θ1 is identical to (41) and A2 and Δω̂ are calculated from (3) and (26).
The control parameters are selected to meet the stability conditions in (18) and (36). Table 1 shows the values of the control parameters used in the simulations. Note that the values in Table 1 are non-dimensionalized based on length 1 μm and time 1/ω1 (sec).
Figure 3(a) shows that the frequency tracking control on the first proof-mass tracks the resonant frequency. The excitation frequency starting from free oscillation frequency of PLL, ω0 = 0.9ω1, reaches the resonant frequency of the proof-mass in 0.4 second and then maintain its value. The averaged resolution of the excitation frequency from (23) is σ1 ≈ 0.004 Hz. Figure 3(b) shows the response of the estimation error, Δω̃, showing that it converges to zero around 0.6 second.
As soon as the estimation error becomes zero, the dynamic characteristic of the second proof-mass begins to have the same resonant frequency as the first proof-mass, as observed in Figures 4. The estimation error of Δω calculated from (38), is less than σ2 ≈ 0.01% ×Δω̃. Figure 4(a) is the displacement response of the proof-mass. Its amplitude is maintained at the specified value, X0 = 5 μm, after some time. Figure 4(b) zooms in the response plotted in Figure 4(a) for 1 msec, showing that the two proof-masses oscillate in anti-phase with same resonant frequency and amplitude.

5. Application to Mode Matching for a Vibratory Gyroscope 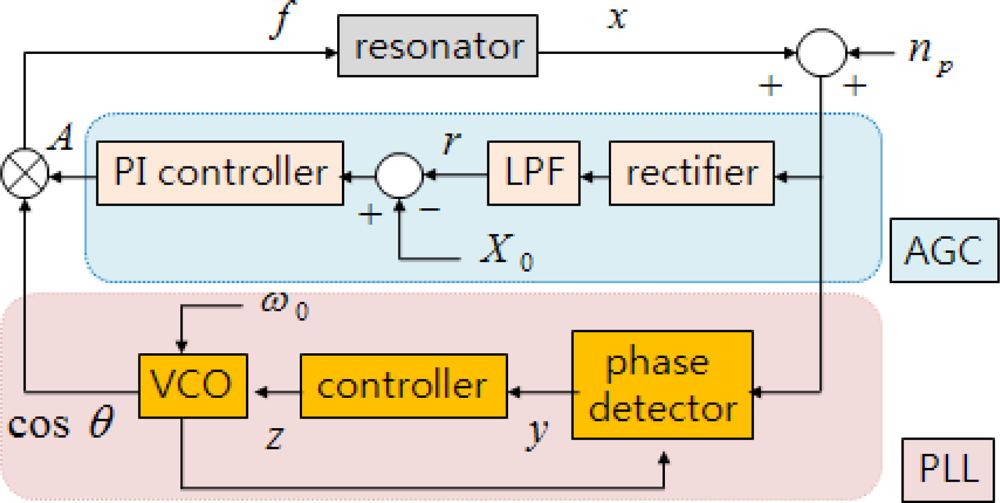 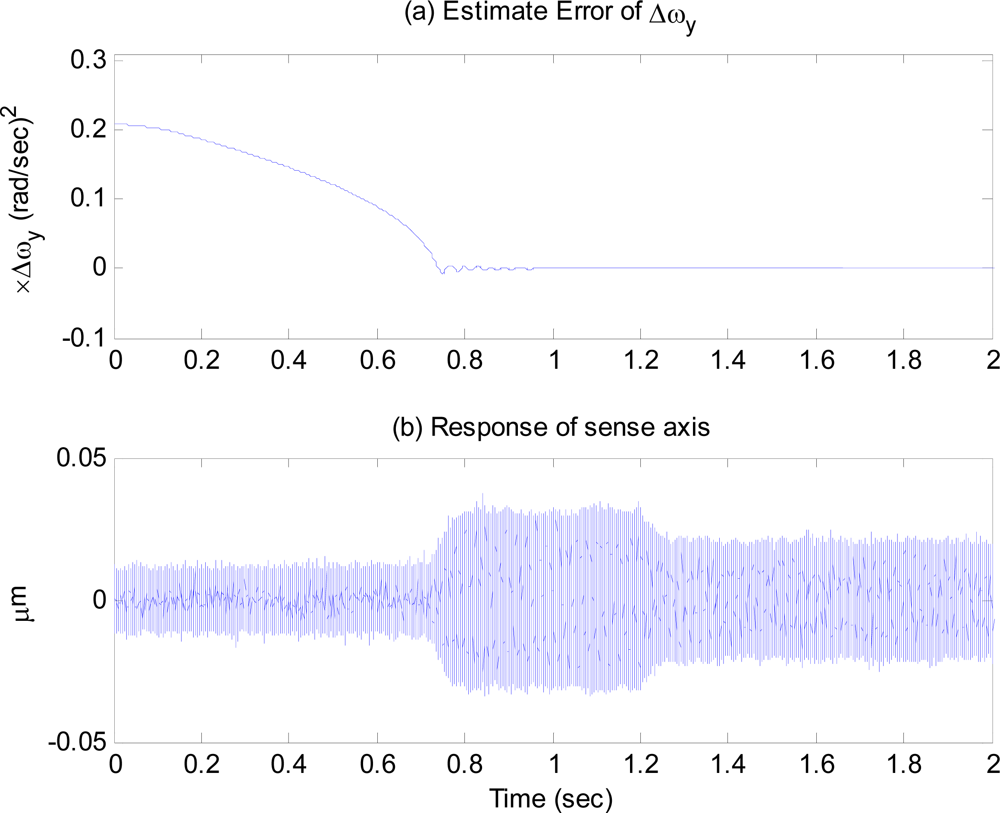 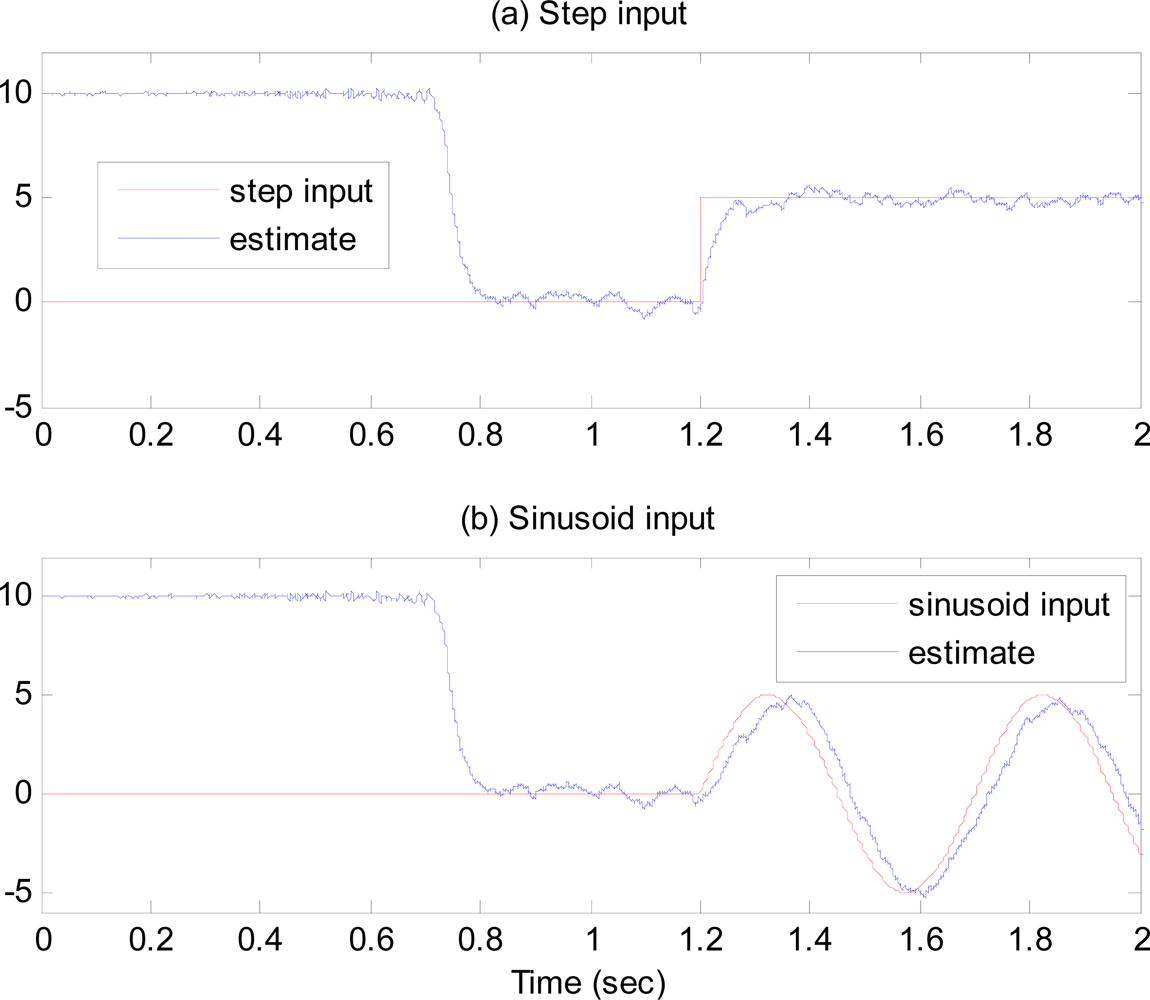 © 2009 by the authors; licensee MDPI, Basel, Switzerland This article is an open access article distributed under the terms and conditions of the Creative Commons Attribution license (http://creativecommons.org/licenses/by/3.0/).