Over the last few years, the use of smartwatches in automatic Fall Detection Systems (FDSs) has aroused great interest in the research of new wearable telemonitoring systems for the elderly. In contrast with other approaches to the problem of fall detection, smartwatch-based FDSs can benefit from the widespread acceptance, ergonomics, low cost, networking interfaces, and sensors that these devices provide. However, the scientific literature has shown that, due to the freedom of movement of the arms, the wrist is usually not the most appropriate position to unambiguously characterize the dynamics of the human body during falls, as many conventional activities of daily living that involve a vigorous motion of the hands may be easily misinterpreted as falls. As also stated by the literature, sensor-fusion and multi-point measurements are required to define a robust and reliable method for a wearable FDS. Thus, to avoid false alarms, it may be necessary to combine the analysis of the signals captured by the smartwatch with those collected by some other low-power sensor placed at a point closer to the body’s center of gravity (e.g., on the waist). Under this architecture of Body Area Network (BAN), these external sensing nodes must be wirelessly connected to the smartwatch to transmit their measurements. Nonetheless, the deployment of this networking solution, in which the smartwatch is in charge of processing the sensed data and generating the alarm in case of detecting a fall, may severely impact on the performance of the wearable. Unlike many other works (which often neglect the operational aspects of real fall detectors), this paper analyzes the actual feasibility of putting into effect a BAN intended for fall detection on present commercial smartwatches. In particular, the study is focused on evaluating the reduction of the battery life may cause in the watch that works as the core of the BAN. To this end, we thoroughly assess the energy drain in a prototype of an FDS consisting of a smartwatch and several external Bluetooth-enabled sensing units. In order to identify those scenarios in which the use of the smartwatch could be viable from a practical point of view, the testbed is studied with diverse commercial devices and under different configurations of those elements that may significantly hamper the battery lifetime. View Full-Text
Keywords: fall detection system; inertial sensors; smartwatches; accelerometers; Android; battery consumption fall detection system; inertial sensors; smartwatches; accelerometers; Android; battery consumption
►▼ Show Figures 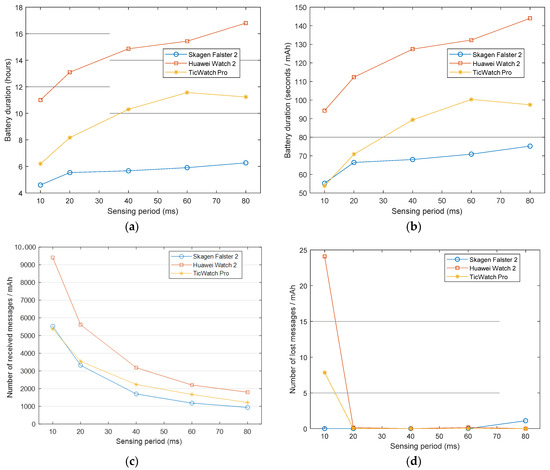