The three polypyrrole (PPy) films with different mixture ratios, namely PPy1, PPy2, and PPy3, were synthesized by chemical oxidation with pyrrole and ferric chloride (FeCl3). The roughened plastic optical fiber (POF) taper assembled PPy films (POF-PPy1, POF-PPy2, and POF-PPy3) were facilely prepared and bentU shape structure for testing ethanol gas at room temperature. The morphologies of the PPy films and the roughened POF taper were studied using electron microscopy. The effect of the three PPy films on the gas response was investigated and the results showed that the POF-PPy2 exhibited a high sensitivity of 5.08 × 10−5 dB/ppm. The detection limit of the sensor was 140 ppm and its response and recovery times were 5 s and 8 s, respectively. The results also showed that as the bending radius decreased, the response and recovery times gradually shortened, while the output power increased. In addition, the proposed sensor has advantages of a low cost and simple structure. View Full-Text
Keywords: polypyrrole films; roughened POF taper; ethanol gas polypyrrole films; roughened POF taper; ethanol gas
►▼ Show Figures 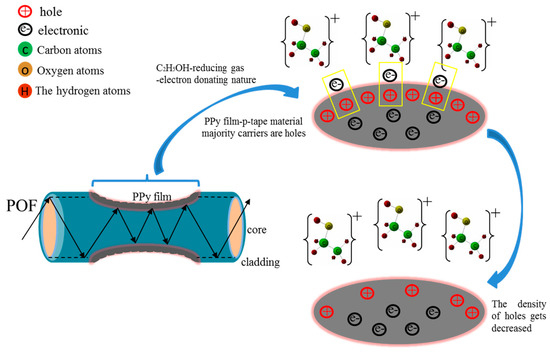