The influence of heat generation on the conventional process of LSPR based sensing has not been explored thus far. Therefore, a need exists to draw attention toward the heat generation issue during LSPR sensing as it may affect the refractive index of the analyte, leading to incorrect sensory conclusions. This manuscript addresses the connection between the photo-thermal effect and LSPR. We numerically analyzed the heat performance of a gold cladded nanotip. The numerical results predict a change in the micro-scale temperature in the microenvironment near the nanotip. These numerical results predict a temperature increase of more than 20 K near the apex of the nanotip, which depends on numerous factors including the input optical power and the diameter of the fiber. We analytically show that this change in the temperature influences a change in the refractive index of the microenvironment in the vicinity of the nanotip. In accordance with our numerical and analytical findings, we experimentally show an LSPR shift induced by a change in the input power of the source. We believe that our work will bring the importance of temperature dependence in nanotip based LSPR sensing to the fore.
Keywords: optical fiber sensors; localized surface plasmon resonance; nanotip; electromagnetic heating; refractive index optical fiber sensors; localized surface plasmon resonance; nanotip; electromagnetic heating; refractive index

In order to experimentally verify this hypothesis, the experiment was set up as shown in Figure 1. A light source from Ocean Optics (DH-2000) with an output power of 950 µW was set up. The light source used by us was the same as that used by [31,36]. The output from the light source was fed into an optical fiber that terminated at a Neutral Density Filter (ND-filter). For the purpose of the experiment, ND filters with values of 80, 50, 25, and 10 were used, whereas the 100 percent power could be obtained by the removal of the filter altogether. This ND-filter was then connected to another multimode fiber that terminated at a gold cladded nanotip procured from Rayme Biotechnology. The schematic and Scanning Electron Microscope (SEM) picture of the nanotip are given in the insets in Figure 1.
The nanotip was in-turn immersed in the analytes such as methanol, ethanol, IPA (iso-propyl alcohol/propanol) and deionized water. While deionized water was laboratory produced, the other chemicals were procured from the Sinopharm Chemical Reagent Company. The light in the analyte was collected using an objective lens of an Olympus IX73 microscope and analyzed using SpectraPro HRS-500 from Princeton Instruments with a spectral resolution of 0.1 nm (i1-120-500-P Ruled grating, 68 x 68 mm, 1200 G/mm with 500 nm blaze wavelength). The working distance between the objective and the tip was maintained at around 2 cm.

We looked at the presence of the photothermal effect at the apex of a plasmonic tip. We explored its link with the change in the microscale refractive index in the vicinity of the nanotip. The temperature based change in the refractive index is reflected by the shift of LSPR. The experimental evidence shows that the shift in the LSPR is not constant for all analytes and is dependent on the rate of change of the refractive index of each particular analyte with respect to the change in temperature. This becomes more complicated due to the fact that the refractive index of the material is not constant for all frequencies of the electromagnetic spectrum. As a result, the temperature at the apex of the nanotip changes, and is subject to, among other things, the profile of the nanotip and the input power used.
All of the above discussion implies that using a metal-cladded nanotip as an LSPR sensor requires extreme care as a mismatch of the physical dimensions of the nanotip, incident power, and the length of the nanotip immersed in the solution can easily lead to increase in surrounding temperature causing inaccurate LSPR based sensing. On the hand, it also opens up the possibility of using a metal cladded nanotip as a low powered nanoheater. This would provide localized heating to only the desired location and the ability to control the location that is heated, something that is not possible with the distributed nanoparticles used in most thermoplasmonic studies.

The following are available online at https://www.mdpi.com/1424-8220/20/3/671/s1, Table S1: Details of the physical parameters of gold and silica used; Table S2: Details of the simulation setup; Figure S1: The complete schematic of the model used for simulation is given in (a), with the fiber tip at the bottom left corner while the rest of the region is the environment. The environment has been removed from the image for the sake of simplicity. (b) The schematic of the fiber tip used for simulation in the inset shows the enlarged image of the tip. (c) The mesh on the fiber tip is shown while the inset presents the enlarged image of the tip. The outline of the actual tip is highlighted in the image to make it discernable in the image; Figure S2: Relationship between the refractive index and incident wavelength for our chemicals of interest; Figure S3: Scatterplot of the wavelength of the LSPR peak with respect to normalized intensity for each of the analyte chemicals including data points for 10% of the input light; Figure S4: The graph shows the change in temperature with respect to the change in fiber diameter; Table S3: Details of studies that used LSPR, giving the laser powers used in each; Table S4: Details of studies using the photothermal effect giving the laser powers used in each.

This work was financially supported by the National Key Research and Development Program of China (No. 2017YFA0205700 and 2018YFF0215200), the National Natural Science Foundation of China (Grants 61850410528 and 81827901); the Fundamental Research Funds for the Central Universities; the Six Talent Peaks Project of Jiangsu Province; and the Fundamental Research Project of Shenzhen Science & Technology Innovation Committee (JCYJ20180306174552939). 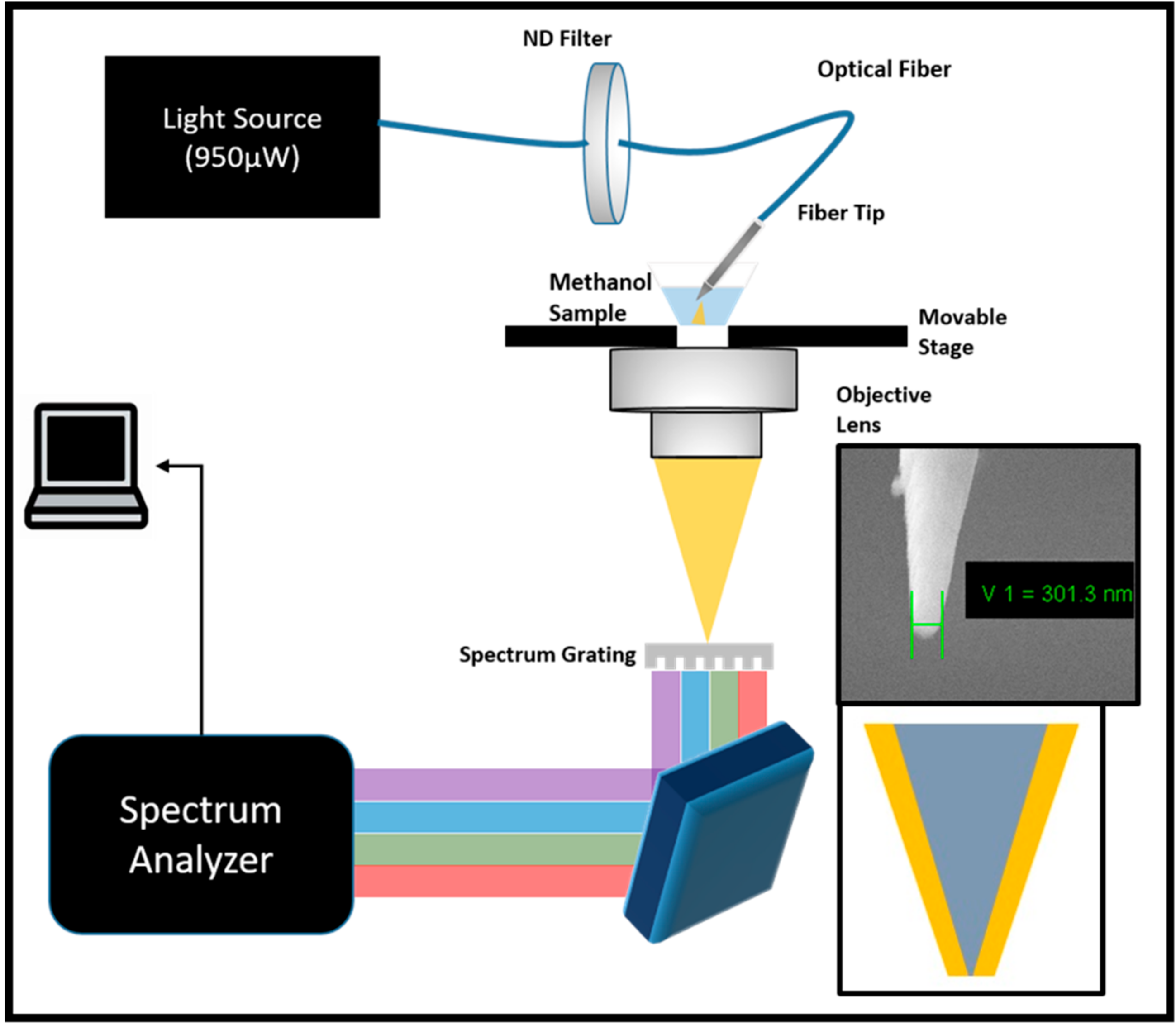 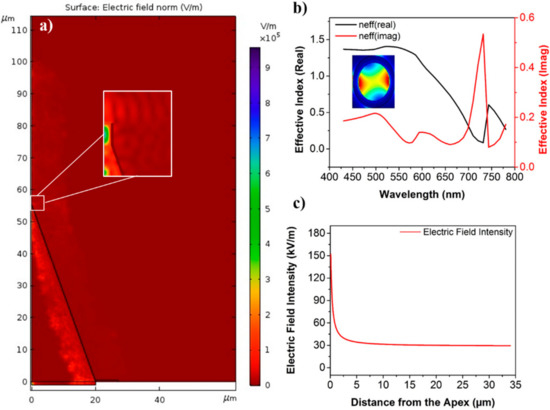 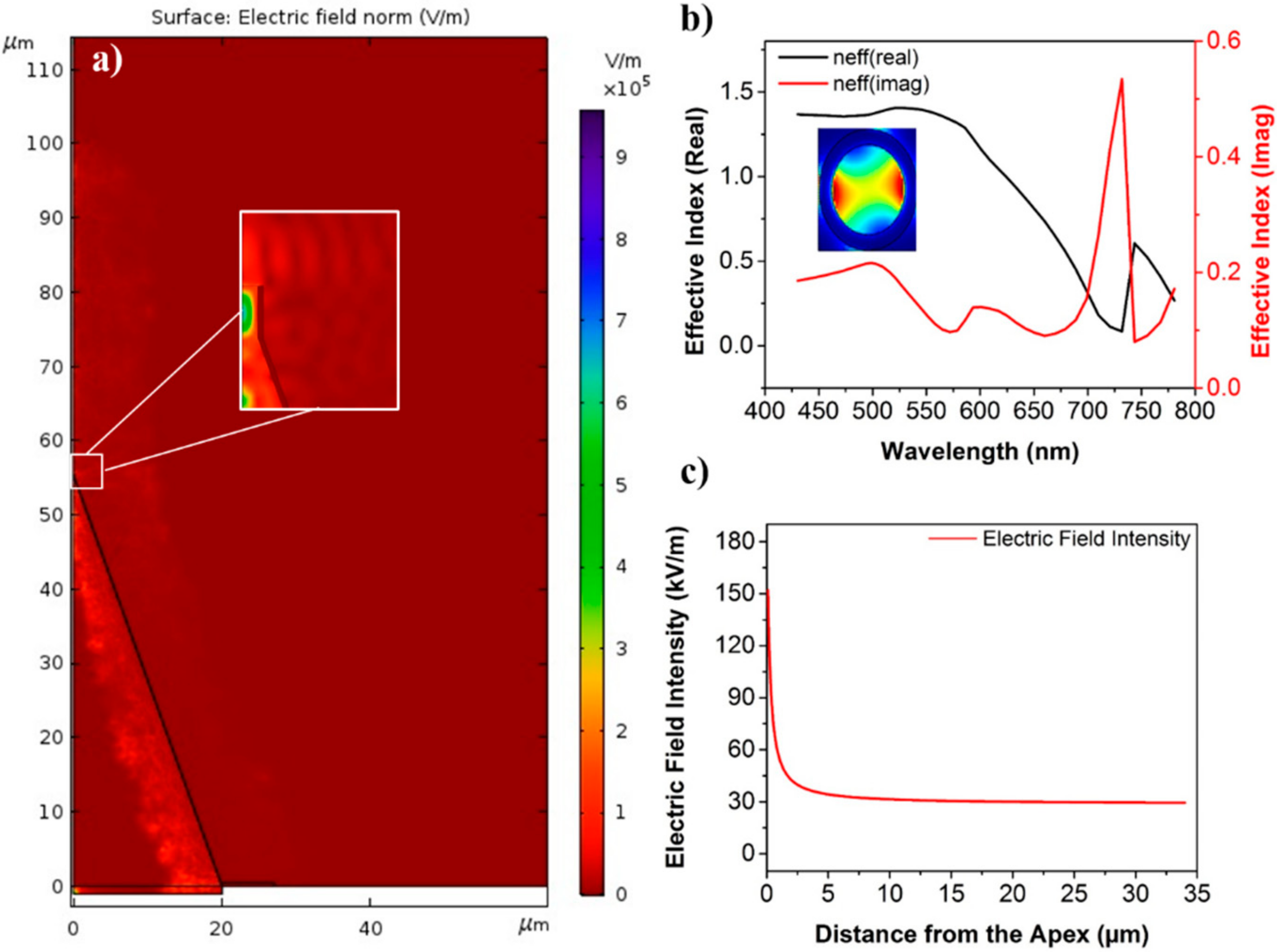