Fall Detection Systems (FDSs) based on wearable technologies have gained much research attention in recent years. Due to the networking and computing capabilities of smartphones, these widespread personal devices have been proposed to deploy cost-effective wearable systems intended for automatic fall detection. In spite of the fact that smartphones are natively provided with inertial sensors (accelerometers and gyroscopes), the effectiveness of a smartphone-based FDS can be improved if it also exploits the measurements collected by small low-power wireless sensors, which can be firmly attached to the user’s body without causing discomfort. For these architectures with multiple sensing points, the smartphone transported by the user can act as the core of the FDS architecture by processing and analyzing the data measured by the external sensors and transmitting the corresponding alarm whenever a fall is detected. In this context, the wireless communications with the sensors and with the remote monitoring point may impact on the general performance of the smartphone and, in particular, on the battery lifetime. In contrast with most works in the literature (which disregard the real feasibility of implementing an FDS on a smartphone), this paper explores the actual potential of current commercial smartphones to put into operation an FDS that incorporates several external sensors. This study analyzes diverse operational aspects that may influence the consumption (as the use of a GPS sensor, the coexistence with other apps, the retransmission of the measurements to an external server, etc.) and identifies practical scenarios in which the deployment of a smartphone-based FDS is viable. View Full-Text
Keywords: fall detection system; inertial sensors; smartphones; accelerometers; gyroscopes; Android; battery consumption fall detection system; inertial sensors; smartphones; accelerometers; gyroscopes; Android; battery consumption
►▼ Show Figures 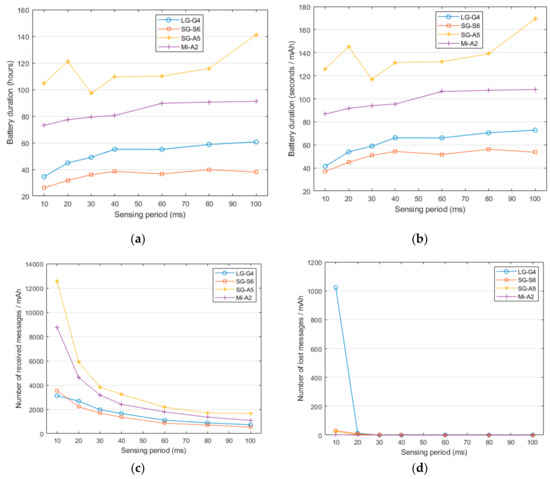