This study proposes a shape approximation approach to portray the regions of interest (ROI) from medical imaging data. An effective algorithm to achieve an optimal approximation is proposed based on the framework of Particle Swarm Optimization. The convergence of the proposed algorithm is derived under mild assumptions on the selected family of shape equations. The issue of detecting Parkinson’s disease (PD) based on the Tc-99m TRODAT-1 brain SPECT/CT images of 634 subjects, with 305 female and an average age of 68.3 years old from Kaohsiung Chang Gung Memorial Hospital, Taiwan, is employed to demonstrate the proposed procedure by fitting optimal ellipse and cashew-shaped equations in the 2D and 3D spaces, respectively. According to the visual interpretation of 3 experienced board-certified nuclear medicine physicians, 256 subjects are determined to be abnormal, 77 subjects are potentially abnormal, 174 are normal, and 127 are nearly normal. The coefficients of the ellipse and cashew-shaped equations, together with some well-known features of PD existing in the literature, are employed to learn PD classifiers under various machine learning approaches. A repeated hold-out with 100 rounds of 5-fold cross-validation and stratified sampling scheme is adopted to investigate the classification performances of different machine learning methods and different sets of features. The empirical results reveal that our method obtains 0.88 ± 0.04 classification accuracy, 0.87 ± 0.06 sensitivity, and 0.88 ± 0.08 specificity for test data when including the coefficients of the ellipse and cashew-shaped equations. Our findings indicate that more constructive and useful features can be extracted from proper mathematical representations of the 2D and 3D shapes for a specific ROI in medical imaging data, which shows their potential for improving the accuracy of automated PD identification. View Full-Text
Keywords: imaging data; Parkinson’s disease; PSO algorithm; shape equation imaging data; Parkinson’s disease; PSO algorithm; shape equation
►▼ Show Figures 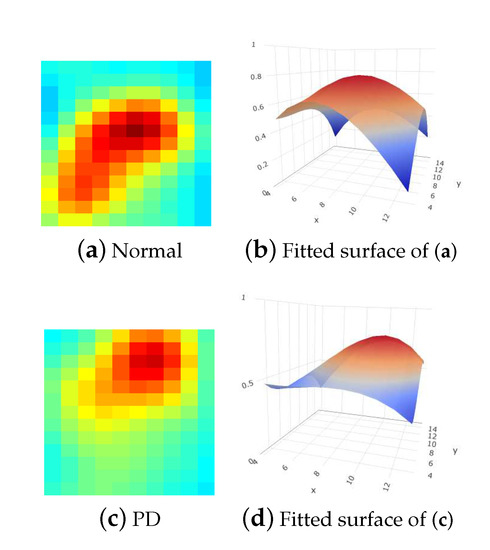