Real-time video streaming over vehicular ad-hoc networks (VANETs) has been considered as a critical challenge for road safety applications. The purpose of this paper is to reduce the computation complexity of high efficiency video coding (HEVC) encoder for VANETs. Based on a novel spatiotemporal neighborhood set, firstly the coding tree unit depth decision algorithm is presented by controlling the depth search range. Secondly, a Bayesian classifier is used for the prediction unit decision for inter-prediction, and prior probability value is calculated by Gibbs Random Field model. Simulation results show that the overall algorithm can significantly reduce encoding time with a reasonably low loss in encoding efficiency. Compared to HEVC reference software HM16.0, the encoding time is reduced by up to 63.96%, while the Bjontegaard delta bit-rate is increased by only 0.76–0.80% on average. Moreover, the proposed HEVC encoder is low-complexity and hardware-friendly for video codecs that reside on mobile vehicles for VANETs.
Keywords: high efficiency video coding; low complexity; hardware friendly; vehicular ad-hoc networks high efficiency video coding; low complexity; hardware friendly; vehicular ad-hoc networks

Vehicular ad-hoc networks (VANETs) can provide multimedia communication between vehicles with the aim of providing efficient and safe transportation [1]. Vehicles with different sensors can exchange and share information for safely breaking, localization and obstacle avoiding. Moreover, the sharing of traffic accident’s live video can improve the rescue efficiency and alleviate traffic jams. However, video transmission has been considered as a challenging task for VANETs, because video transmission over VANETs can significantly increase bandwidth [2]. This work focuses on the development of video codec that supports real-time video transmission over VANETs for road safety applications.
The demanding challenges of VANETs are bandwidth limitations and opportunities, connectivity, mobility, and high loss rates [3]. Because of the resource-demanding nature of video data in road safety applications, bandwidth limitations is the bottleneck for real-time video transmission over VANETs [4,5]. Moreover, due to the limited vehicle node’s battery lifetime, video delivery over VANETs remains extremely challenging. Essentially, the low-complexity video encoder can accelerate the video transmission in real-time, and achieve low delay for video streaming. Hence, in order to transmit real-time video with bandwidth constraint, it is vital to develop an efficient video encoder. A video encoder with high encoding efficiency and low encoding complexity is the core requirement of VANETs [6].
Concurrently, the main video codecs are High Efficiency Video Coding (HEVC, or H.265) that are developed by the Joint Collaborative Team on Video Coding (JCT-VC) Group, and AV1 that is developed by Alliance for Open Media (AOMedia) [7]. Nevertheless, video codec is faced with several challenges. AV1 is a newer codec, royalty free and open sourced. However, the hardware implementation of AV1 encoder will take a long time. H.265/HEVC is the state-of-the-art standardized video codecs [8]. Compared with H.265/HEVC, AV1 increases the complexity significantly without achieving an increase in coding efficiency. When supporting the most available (resource-limited/mobile) devices or having a need for real-time, low latency encoding, it would be better to stick to H.265/HEVC. However, the encoding complexity of H.265/HEVC encoder increases dramatically due to its recursive quadtree representation [9]. Although previous excellent works have been proposed for reducing H.265/HEVC encoder complexity [10,11,12,13,14], most of them balance the encoding complexity and encoding efficiency unsuccessfully.
To address this issue, spatial and temporal information is widely used to reduce the computation redundancy of the H.265/HEVC encoder. However, the spatiotemporal correlation between the coding unit and the neighboring coding unit is not better used. To the author’s best knowledge, complexity reduction in real-time coding with the available computational power at the VANET nodes has not been well studied, especially from the viewpoint of hardware implementation. The key contributions of this work are summarized as follows:
The rest of paper is organized as follows. Related works are reviewed in Section 2. Section 3 discusses background details. In Section 4, the fast CU decision algorithm is presented. Simulation results are discussed in Section 5. Section 6 concludes this work.

H.265/HEVC standard was released in 2013 by JCT-VC, which can reduce bit-rates by about 50% over H.264. In addition, H.265/HEVC adopts hybrid video compression technology, and the typical structure of H.265/HEVC encoder is shown in Figure 1. The main modules of H.265/HEVC encoder include: (1) Intra-prediction and inter-prediction, (2) transform (T), (3) quantization (Q) and (4) context-adaptive binary arithmetic coding (CABAC) entropy coding. Moreover, inter-prediction and intra-prediction modules are used to decrease the spatial and temporal redundancy. Transform and quantization modules are used to decrease visual redundancy. The entropy coding module is used to decrease the information entropy redundancy. It is noted that the inter-prediction module is the most critical tool, which consumes about 50% computation complexity. Then, in order to achieve real-time coding, the computation complexity of H.265/HEVC encoder should be reduced by decreasing spatiotemporal redundancy.
The video frame is divided into a lot of coding tree units (CTUs) in H.265/HEVC standard. A CTU includes a coding tree block (CTB) of the luma samples, two CTBs of the chroma samples, and associated syntax elements. The CTU size can be adjusted from to . Each CTU can be divided into four square CUs, and a CU can be recursively divided into four smaller CUs. A CU consists of a coding block (CB) of the luma samples, two CBs of the choma samples, and the associated syntax elements. The CU size can be , , , or . Figure 2 shows an example of the CTB structure for a given CTU. The CTU in Figure 2a is divided into different sized CUs. Correspondingly, the CTB structure is shown in Figure 2b. In each depth of CTB, the rate-distortion (RD) cost of each node is checked until the RD cost is minimum.
The prediction unit (PU) can be transmitted in the bitstream, which identifies the prediction mode of CU. A PU consists of a prediction block (PB) of the luma, two PB of the chroma, and associated syntax elements. Figure 3 shows the eight partition modes that may be used to define the PUs for a CU in H.265/HEVC inter-prediction. For a CU configured to use inter-prediction, all eight partitions include four symmetry modes (, , , ) and four asymmetric modes (, , , ).
A CU can be recursively divided into transform units (TUs) according to the quadtree structure, and CU is the root of the quadtree. The TU is a basic representative block having residual or transform coefficients. In TU, one syntax element named coded block flag (cbf) indicates whether at least one non-zero transform coefficient is transmitted for the whole CU. When there is a non-zero coefficient, cbf is equal to 0. When there is no non-zero coefficients, cbf is equal to 1. Moreover, cbf is an important factor for the CU size decision [14].
The advantage of block partitioning structure is that the arbitrary size of CTU enables the codec to be readily optimized for various contents, applications, and devices. However, the recursive structure of coding block causes lots of redundant computing. In order to support the real-time video transmission over VANETs, the redundant computing of the H.265/HEVC encoder should be decreased significantly.

4. The Proposed Low-Complexity and Hardware-Friendly H.265/HEVC Encoder for VANETs

The object motion is regular in video sequences and there is some continuity in the depth between adjacent CUs. If the depth range of the current CU can be inferred from the encoded neighboring CU, then some hierarchical partitioning is directly skipped or terminated. Therefore, the computational complexity has been reduced, significantly.
In order to utilize the spatiotemporal correlation, the four neighborhood set G is defined as
Set G is shown in Figure 4, where , , , and denote the left, top-left CU, top-right, and collocated of the current CU, respectively.

The CU splitting or non-splitting is formulated as a binary classification problem , where i = 0, 1. In this work, and respectively represent CU non-splitting and CU splitting, and the variable x represents the RD-cost of the PU. According to the Bayes’ rule, the posterior probability can be calculated as follows:
According to Bayesian decision theory, the prior probability and the conditional probability values must be known. Therefore, CU non-splitting () will be chosen if the following condition holds true:
Otherwise, CU splitting () will be chosen.
The conditional probability and are the probability density function of the RD cost, and they are approximated by normal distributions. Defining the mean values and covariance of RD cost of CU non-splitting and splitting as and , the normal function can be given by
The prior probability is modeled with Gibbs Random Fields (GRF) model in set G [30], and will always have the Gibbsian form where Z is a normalization constant, and is cost function. k is the index of set G, and denotes the non-splitting or splitting value of the neighborhood k-CU (). The CU size decision deals with the binary classification problem (), and the clique potential obeys the Ising model [31]: where the parameter is the coupling factor, which denotes the strength of current CU correlation with neighborhood k-CU in set G. In this work, is set to “0.75”. Then, the prior can be written in the factorized form:
At last, the Equation (6) can be written as
Finally we can define the final CU decision function as , which can be written in the exponential form
It should be noted that the statistical parameters are estimated by using a non-parametric estimation with online learning, and are stored in a lookup table (LUT). The frames used for online updating of the values of and are shown as in Figure 5. In each group of pictures(GOP), the 1st frame that can be encoded by using the original H.265/HEVC coding will be used for the online update, while the successive frames are coded by using the proposed algorithm.
Through the above analysis, the proposed PU decision based on Bayes’ rule includes the CU termination decision (inter ) and CU skip decision (inter , , ). In the case of the CU termination decision, the current CU is not divided into sub-CUs in the sub-depth. In the case of the CU skip decision, the current PU mode in current CU depth is determined at the earliest possible stage. Therefore, the flowchart of the proposed PU mode decision is described as follows.

Figure 8 shows the core architecture of the H.265/HEVC with mode decision. By using the architecture, inter-frame prediction is used to eliminate the spatiotemporal redundancy. The proposed CU decision method can accelerate the inter-prediction module before fast rate-distortion optimization (RDO). The novel spatiotemporal neighboring set is used to reduce the complexity of inter encoder which leads to a very low-power cost. Moreover, video codec on mobile vehicles for VANETs need to be more energy efficient and more reliable, so reducing the complexity of the video encoder is important. Then, the proposed low-complexity and hardware-friendly H.265/HEVC encoder can ensure the reliability of the video codec for VANETs significantly. Moreover, as a benefit of the high complexity reduction rate, the energy consumption can be reduced for hardware design, significantly.

In order to develop the low-complexity and hardware-friendly H.265/HEVC encoder for VANETs, based on a novel spatiotemporal neighborhood set, the Bayesian rule and Gibbs Random Field are used to reduce the encoding complexity for the H.265/HEVC inter-prediction in this work. The proposed algorithm consists of CTU depth decision and PU mode decision methods. Experimental results demonstrate that the proposed approach can reduce the average encoding complexity of H.265/HEVC encoder by about 50% for VANETs, while the increasing of BDBR is less than or equal to 0.8% on average. 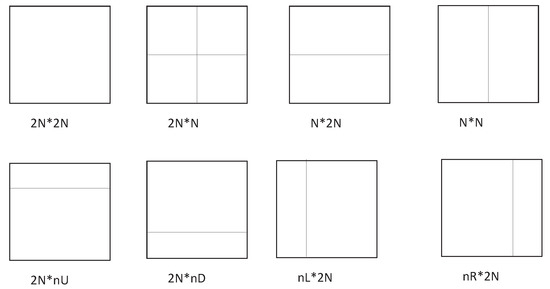 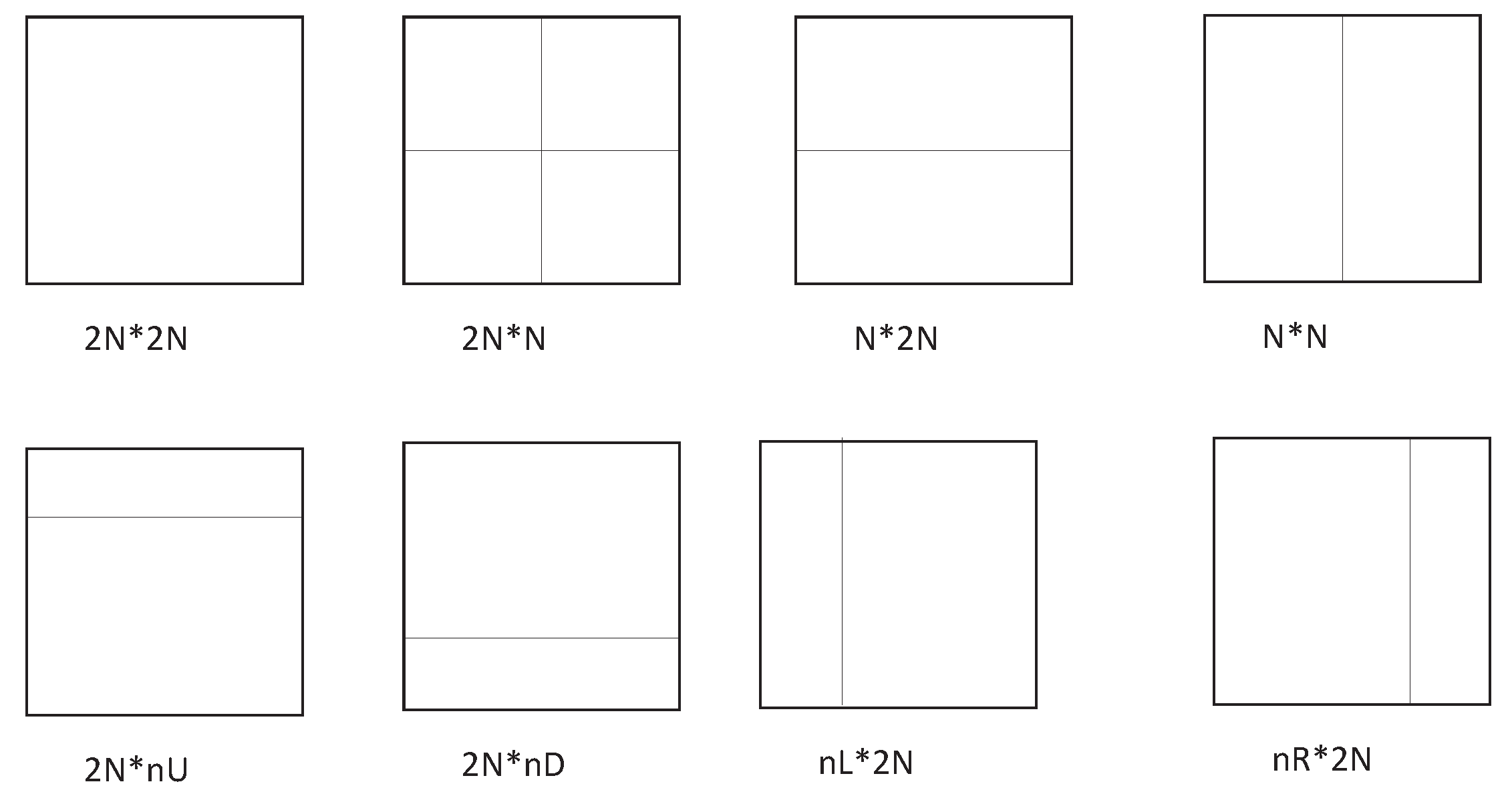 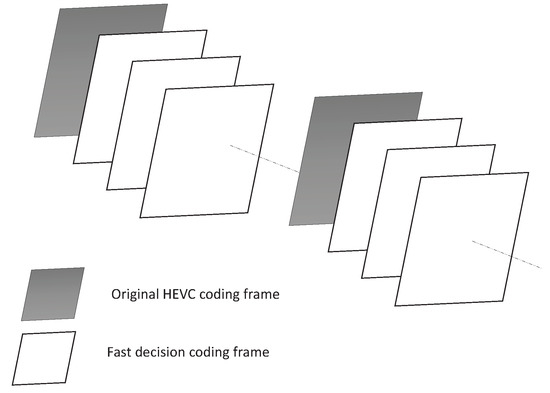 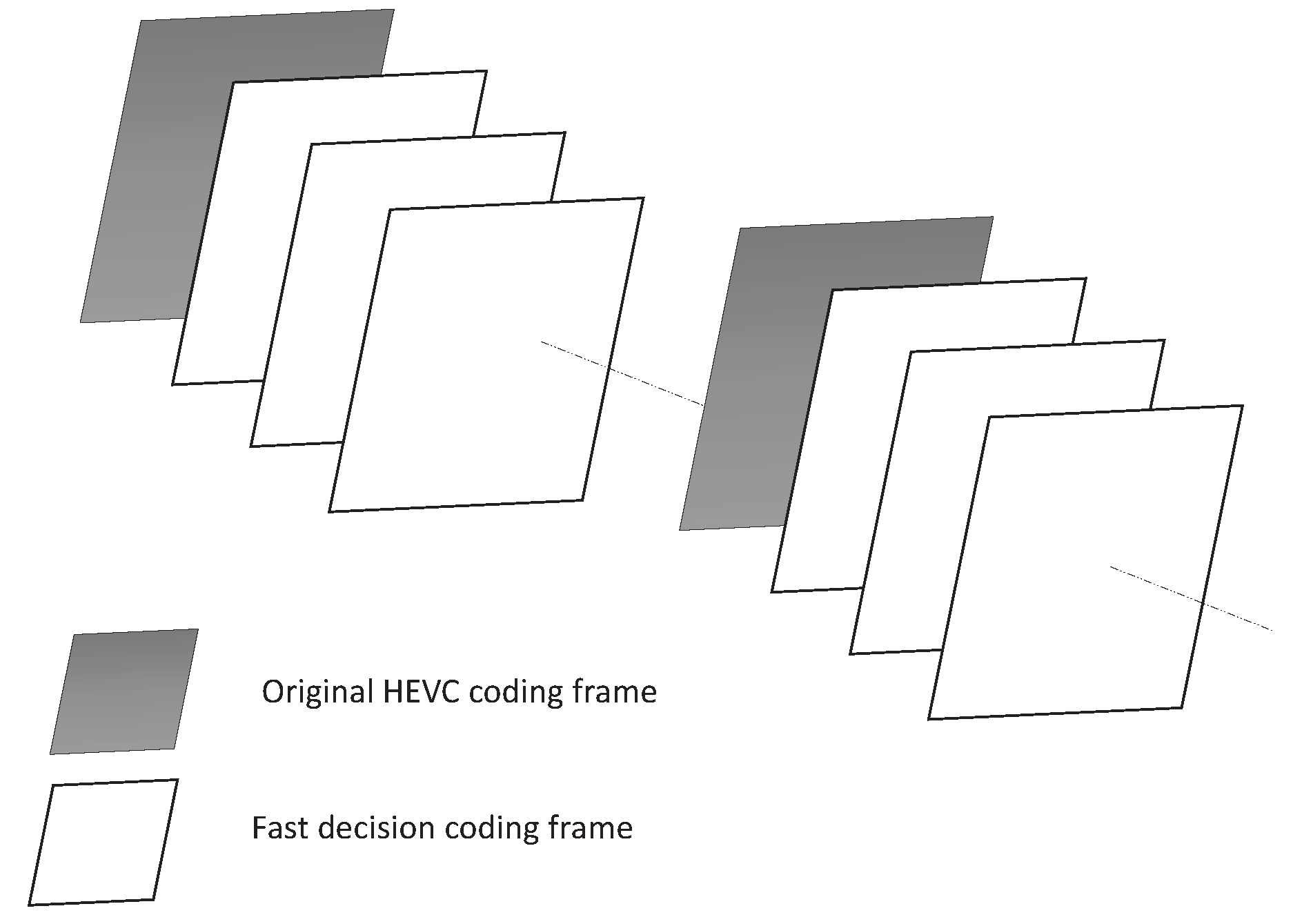 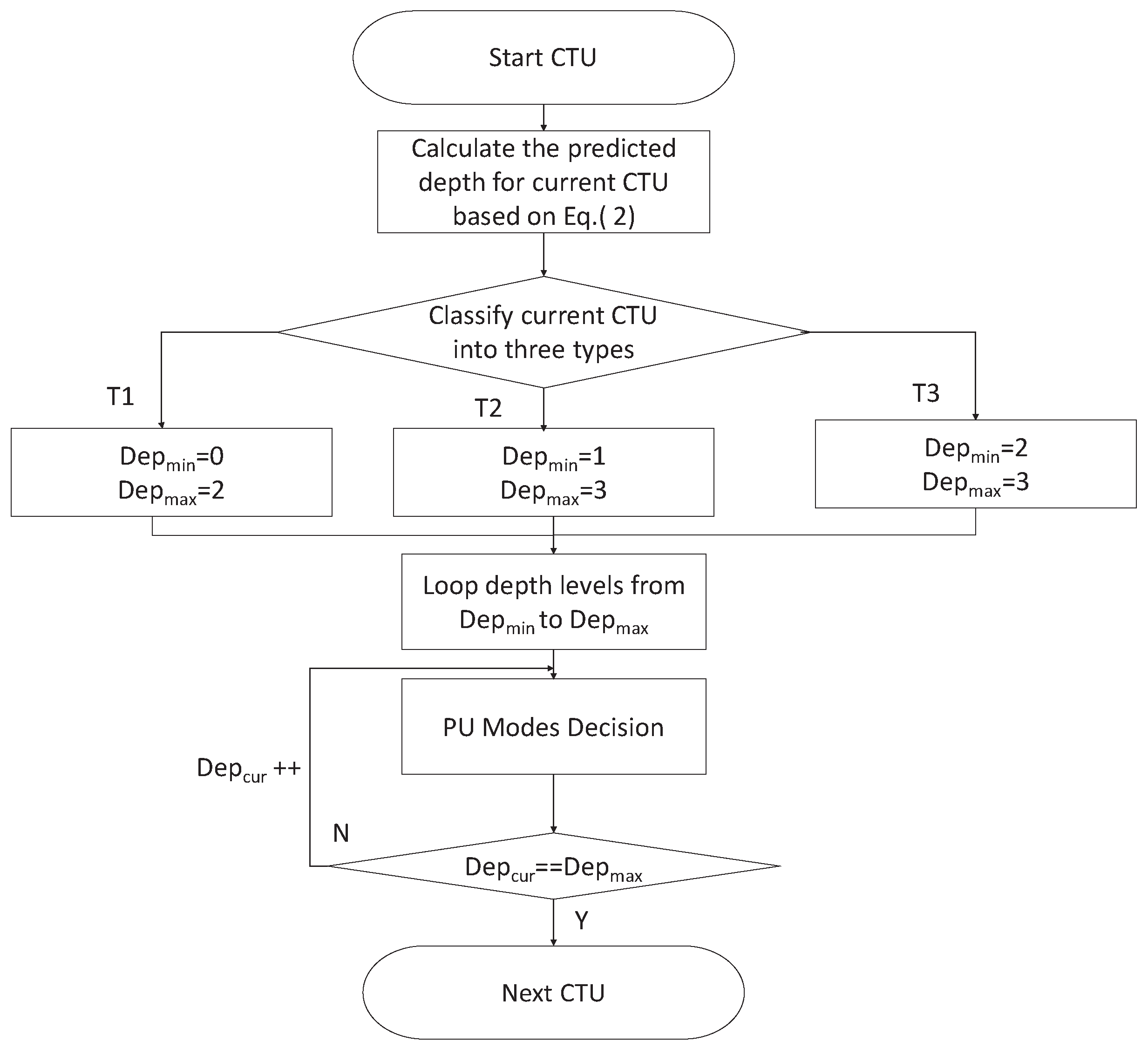 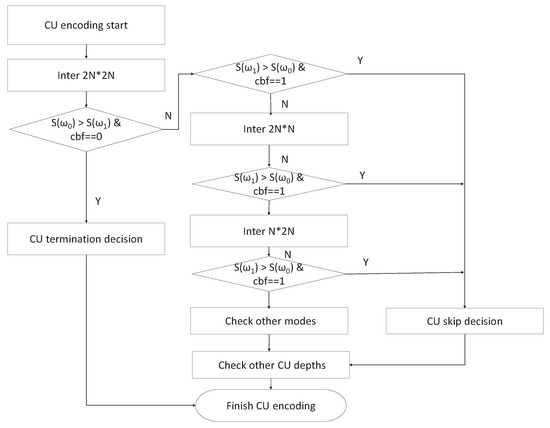