The accurate and reliable extraction of specific gait events from a single inertial sensor at waist level has been shown to be challenging. Among several techniques, a wavelet-based method for initial contact (IC) and final contact (FC) estimation was shown to be the most accurate in healthy subjects. In this study, we evaluated the sensitivity of events detection to the wavelet scale of the algorithm, when walking at different speeds, in order to optimize its selection. A single inertial sensor recorded the lumbar vertical acceleration of 20 subjects walking at three different self-selected speeds (slow, normal, and fast) in a motion analysis lab. The scale of the wavelet method was varied. ICs were generally accurately detected in a wide range of wavelet scales under all the walking speeds. FCs detection proved highly sensitive to scale choice. Different gait speeds required the selection of a different scale for accurate detection and timing, with the optimal scale being strongly correlated with subjects’ step frequency. The best speed-dependent scales of the algorithm led to highly accurate timing in the detection of IC (RMSE < 22 ms) and FC (RMSE < 25 ms) across all speeds. Our results pave the way for the optimal adaptive selection of scales in future applications using this algorithm. View Full-Text
Keywords: initial contact; final contact; inertial sensor; wavelet; gait parameters initial contact; final contact; inertial sensor; wavelet; gait parameters
►▼ Show Figures 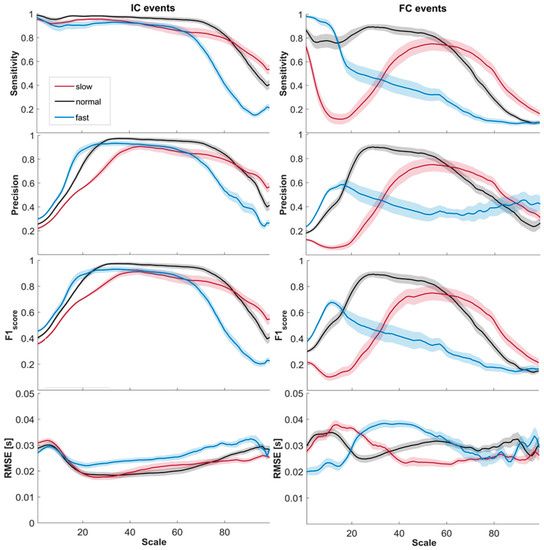 Caramia, C.; De Marchis, C.; Schmid, M. Optimizing the Scale of a Wavelet-Based Method for the Detection of Gait Events from a Waist-Mounted Accelerometer under Different Walking Speeds. Sensors 2019, 19, 1869.


Caramia C, De Marchis C, Schmid M. Optimizing the Scale of a Wavelet-Based Method for the Detection of Gait Events from a Waist-Mounted Accelerometer under Different Walking Speeds. Sensors. 2019; 19(8):1869.


Caramia, Carlotta; De Marchis, Cristiano; Schmid, Maurizio. 2019. "Optimizing the Scale of a Wavelet-Based Method for the Detection of Gait Events from a Waist-Mounted Accelerometer under Different Walking Speeds." Sensors 19, no. 8: 1869.