In the daily management of type 1 diabetes (T1D), determining the correct insulin dose to be injected at meal-time is fundamental to achieve optimal glycemic control. Wearable sensors, such as continuous glucose monitoring (CGM) devices, are instrumental to achieve this purpose. In this paper, we show how CGM data, together with commonly recorded inputs (carbohydrate intake and bolus insulin), can be used to develop an algorithm that allows classifying, at meal-time, the post-prandial glycemic status (i.e., blood glucose concentration being too low, too high, or within target range). Such an outcome can then be used to improve the efficacy of insulin therapy by reducing or increasing the corresponding meal bolus dose. A state-of-the-art T1D simulation environment, including intraday variability and a behavioral model, was used to generate a rich in silico dataset corresponding to 100 subjects over a two-month scenario. Then, an extreme gradient-boosted tree (XGB) algorithm was employed to classify the post-prandial glycemic status. Finally, we demonstrate how the XGB algorithm outcome can be exploited to improve glycemic control in T1D through real-time adjustment of the meal insulin bolus. The proposed XGB algorithm obtained good accuracy at classifying post-prandial glycemic status (AUROC = 0.84 [0.78, 0.87]). Consequently, when used to adjust, in real-time, meal insulin boluses obtained with a bolus calculator, the proposed approach improves glycemic control when compared to the baseline bolus calculator. In particular, percentage time in target [70, 180] mg/dL was improved from 61.98 (±13.89) to 67.00 (±11.54; p < 0.01) without increasing hypoglycemia. View Full-Text
Keywords: continuous glucose monitoring; decision support systems; machine learning; type 1 diabetes; gradient boosted trees; postprandial glycaemia continuous glucose monitoring; decision support systems; machine learning; type 1 diabetes; gradient boosted trees; postprandial glycaemia
►▼ Show Figures 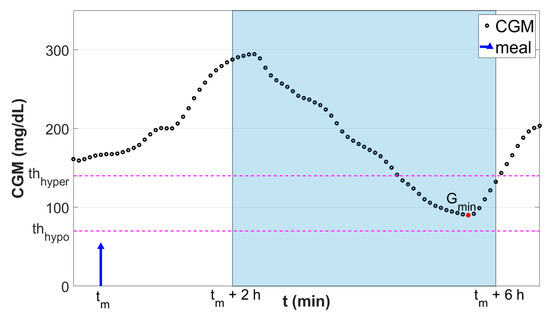