The Marine Boundary Layer Height over the Western North Pacific Based on GPS Radio Occultation, Island Soundings, and Numerical Models

Currently, the Global Navigation Satellite System (GNSS) mainly uses the satellites in Medium Earth Orbit (MEO) to provide position, navigation, and timing (PNT) service. The weak navigation signals limit its usage in deep attenuation environments, and make it easy to interference and counterfeit by jammers or spoofers. Moreover, being far away to the Earth results in relatively slow motion of the satellites in the sky and geometric change, making long time needed for achieved centimeter positioning accuracy. By using the satellites in Lower Earth Orbit (LEO) as the navigation satellites, these disadvantages can be addressed. In this contribution, the advantages of navigation from LEO constellation has been investigated and analyzed theoretically. The space segment of global Chinese BeiDou Navigation Satellite System consisting of three GEO, three IGSO, and 24 MEO satellites has been simulated with a LEO constellation with 120 satellites in 10 orbit planes with inclination of 55 degrees in a nearly circular orbit (eccentricity about 0.000001) at an approximate altitude of 975 km. With simulated data, the performance of LEO constellation to augment the global Chinese BeiDou Navigation Satellite System (BeiDou-3) has been assessed, as one of the example to show the promising of using LEO as navigation system. The results demonstrate that the satellite visibility and position dilution of precision have been significantly improved, particularly in mid-latitude region of Asia-Pacific region, once the LEO data were combined with BeiDou-3 for navigation. Most importantly, the convergence time for Precise Point Positioning (PPP) can be shorted from about 30 min to 1 min, which is essential and promising for real-time PPP application. Considering there are a plenty of commercial LEO communication constellation with hundreds or thousands of satellites, navigation from LEO will be an economic and promising way to change the heavily relay on GNSS systems. View Full-Text
Keywords: navigation; LEO; PPP; ambiguity convergence time navigation; LEO; PPP; ambiguity convergence time
►▼ Show Figures 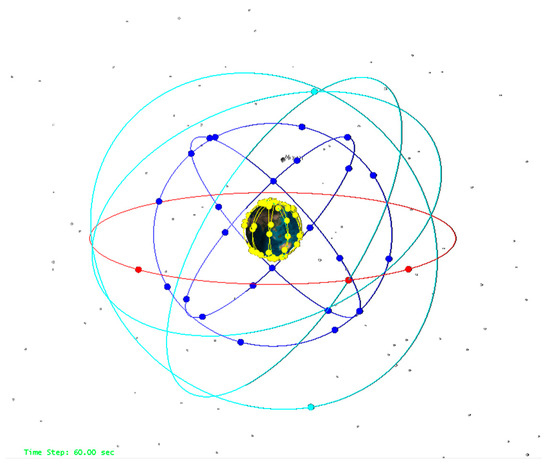