A Sensor Dynamic Measurement Error Prediction Model Based on NAPSO-SVM

Today, sensors are widely used in the real world [1,2,3,4], and sensor errors are one of the keys to evaluate the measurement quality of the sensor results. With the development of modern measurement technology, dynamic measurements have gradually become the mainstream of modern measurement techniques.
As an effective way to improve measurement accuracy and reduce measurement errors, real-time error correction of sensors has been widely used in dynamic measurements. Predicting the dynamic measurement error is useful to correct the errors of sensors. Dynamic measurement errors of sensors are difficult to model with traditional mathematics because they have four features [5]: time-varying, randomness, correlation and dynamic. Because of its complexity, predicting the dynamic errors has been a popular research field [6,7,8,9].
In recent years, several modeling methods were used to predict dynamic errors like the gray theory, Bayesian networks and neural network. Every method has its own advantages and drawbacks. The harmonic analysis method is suitable for modeling periodic sequences, but it is not suitable for random sequences [10]. Bayesian networks is a prediction modeling method, however, it requires the prior distribution and independent samples, which is difficult to achieve in real systems [11]. Grey theory model can be constructed by a few samples, but it only depicts a monotonically increasing or decreasing process [12,13]. Artificial neural network has a good non-linear mapping performance, however, it has disadvantages, such as over-fitting and easily falling into a local minimum [14,15,16].
Support vector machine (SVM) adopts structural risk minimization to improve its generalization ability [17]. It can better solve the problems of nonlinear data and small samples. SVM has been widely applied to solve function fitting problems. However, the generalization ability of SVM depends heavily on the appropriate parameters, and the model’s parameters have a huge influence on the precision of the model predictions [18]. Thus, many optimization algorithms have been adopted to optimize the SVM parameters [19,20,21], like the particle swarm optimization (PSO) algorithm, genetic algorithm (GA) and glowworm swarm optimization (GSO) algorithm. These methods have limitations, as the particle swarm optimization and genetic algorithm fall into local extremes easily [22], and the glowworm swarm optimization algorithm has low convergence precision and slow convergence speed [23]. The NAPSO algorithm is an improved particle swarm optimization algorithm based on the natural selection strategy and simulated annealing mechanism. These two methods are used to improve the global search ability and convergence speed. In this study, a method of dynamic measurement error prediction for sensors based on NAPSO optimize support vector machine is proposed.
The rest of the paper is organized as follows: in Section 2, a detailed overview of the SVM algorithm is provided. Then, in Section 3, the PSO and NAPSO algorithms and the process of optimization are described briefly. Section 4 reports on a simulation of the dynamic measurement error prediction model. The results of experiments are discussed in Section 5. Conclusions are drawn in the last section.

SVM is a machine learning method based on the statistical learning theory developed in mid-1990s. The basic idea of SVM is that the data of input space Rn are mapped to a high dimensional feature space F by a nonlinear mapping, then the linear regression operations are finished in the high dimensional feature space [24].
For a given training dataset {(xi,yi), i = 1,2,…,n}, xi is a n-dimensional input vector and yi is the corresponding output value, φ(x) is the nonlinear mapping from input space Rn to high dimensional feature space F.
The regression function of SVM is formulated as follows: where ω is the weight vector and b is the threshold, the main goal of the SVM is to find the optimal ω, the weight vector ω can be expressed by a linear combination of the training examples. Thus, the Equation (2) takes the form: where αi are Lagrangian multipliers. In the feature space, Equation (4) can be expressed as follows:
Introduce the Kernel function K(xi,yj):
Finnally, the SVM regression function is formulated as:

3. SVM Parameters Optimization Based on NAPSO

Particle swarm optimization was proposed by Eberhart and Kennedy in 1995 [25], PSO was derived from research on bird flocks’ preying behavior. When a flock of birds is looking for food in an area randomly, if there is only one piece of food in the area being searched, the most effective and simple method to find the food is to follow the bird that is closest to the food.
In a PSO algorithm, every single solution is a particle in the search space. Each particle has a fitness value, which is determined by an optimization function, each particle has its own velocity and position. The velocity and position of each particle will be changed by the particle best position and global best position. The update equations of the velocity and position are shown by the following expression:
In the d-dimensional space, t is the iteration number, υi,d(t) is the velocity of particle i at iteration t, υi,d(t + 1) is the velocity of particle i at iteration t + 1, xi,d(t) is the position of particle i at iteration t, xi,d(t + 1) is the position of particle t at iteration t + 1, ω is the inertia weight. c1 is the cognition learning factor, c2 is the social learning factor, r1 and r2 are random numbers that are uniformly distributed in [0,1], pbest is the particle best position for the individual variable of particle i, gbest is the global best position variable of the particle swarm.
The initial position and velocity of each particle are randomly generated and will be updated based on the Equations (9) and (10) until a satisfactory solution is found. In the PSO algorithm, a single particle moves to its pbest and gbest, each particle’s movement generates a fast convergence, thus the PSO algorithm converges rapidly. However, the fast convergence also makes the update of each particle depend too much on its pbest and gbest, which makes the algorithm fall into local optima and easily converge prematurely. Therefore, in this paper, an improved PSO algorithm (NAPSO) is used to optimize the parameters of SVM.

The NAPSO algorithm is applied to optimize the SVM parameters C and σ as follows:

In this paper, two cases have been considered to illustrate the effectiveness of the proposed method. The data of case 1 is a dynamic error sequence, which is derived from the measuring error of an angular instrument with anticlockwise rotation (speed 2r/min) based on standard value interpolation under room temperature, the error sequence contains a total of 240 samples. In case 2, the measuring error sequence of the length grating contains a total 334 samples. A high precision Hewlett Packard 5529A laser interferometer was used as calibration system, A-quad-B pulse from the encoder of grating length gauge is used to trigger the laser interferometer and carry out dynamic data acquisition. The software package of the HP laser interferometer is used to implement data acquisition. The speed of the target mirror is 21.1 mm/s, the experiment has been repeated five times.

To further evaluate the prediction of the NAPSO-SVM model, the root mean square error (RMSE) and mean absolute percent error (MAPE) are used as evaluation indices. The definitions of MAPE and RMSE are as follows: where Yi is the actual value, is the prediction value and n is the number of training samples.
The NAPSO algorithm is used to determine the punishment coefficient C and RBF kernel function width σ. The SVM model is built based on the training samples and optimal parameters. To show the performance of the proposed method, the particles swarm optimization and glowworm swarm optimization are also implemented.

M.J. and L.J. were the main designers of the proposed scheme and wrote the paper. F.L. focused on the research, and part of the paper writing, D.J. and H.S. revised the paper and analyzed the results. 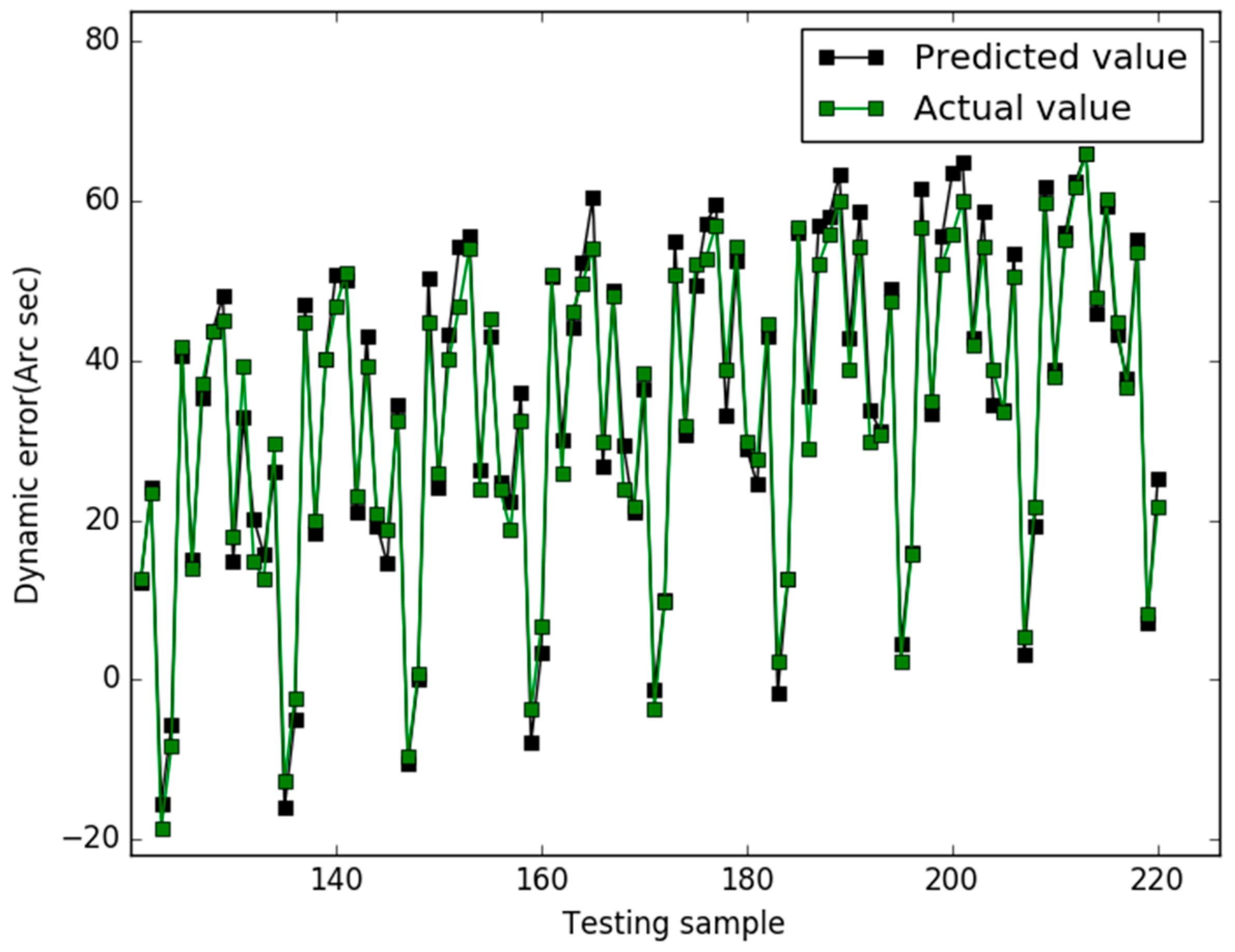 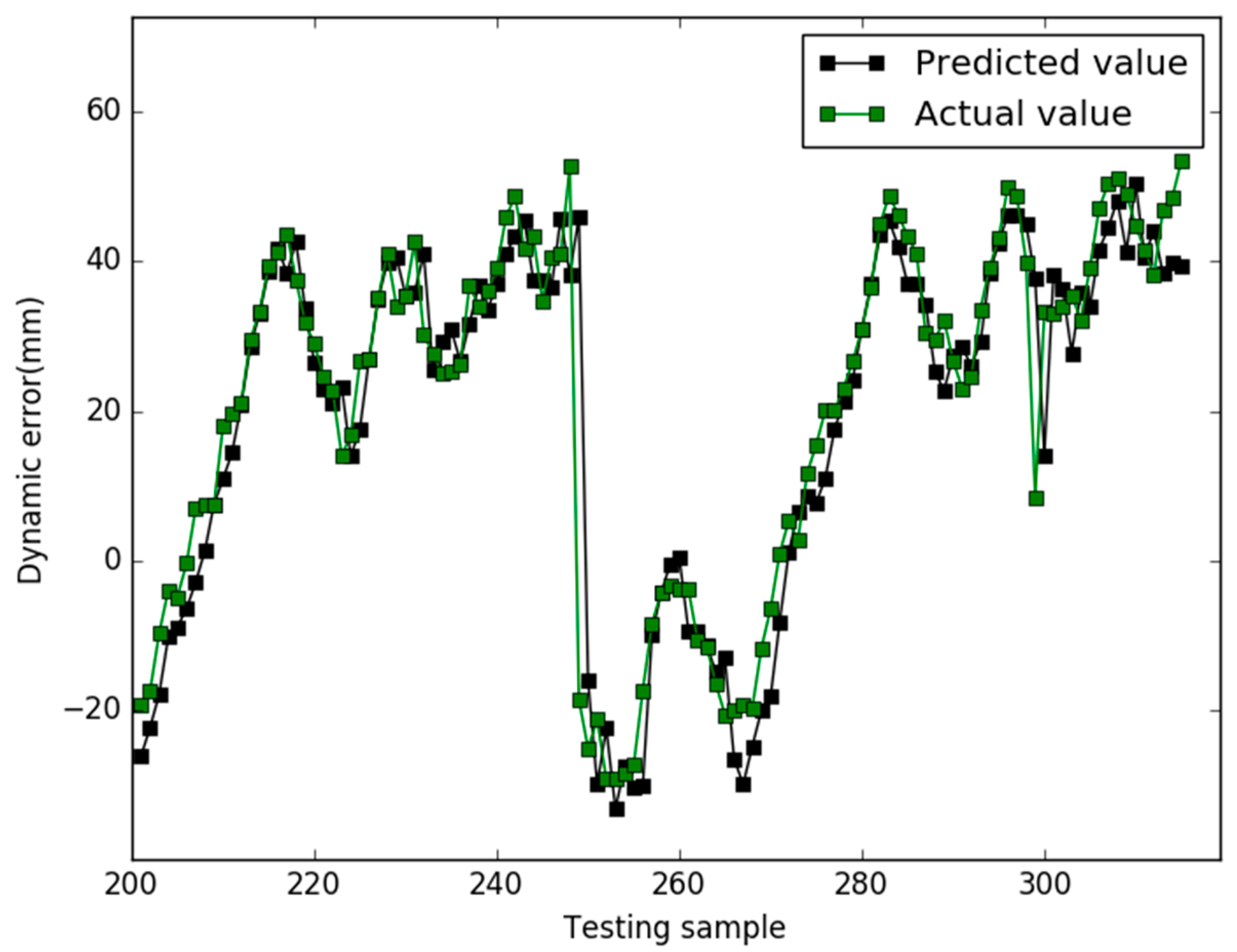