Envelope Correction of Micro-Motion Targets in the Terahertz ISAR Imaging

2.2. Jump Error Correction Method Based on the Periodicity of the HRRP

2.3. Drift Error Compensation Method Based on the Sinusoidal Characteristic of the HRRP

In order to verify the envelope correction method, a terahertz imaging radar system is built and experiments on micro-motion targets are carried out. The terahertz radar system is based on the LFM pulse principle and has a 330 GHz of central frequency with a synthetic bandwidth of 10 GHz, thereby realizing a 1.5 cm theoretical range resolution. The terahertz signal is transmitted by a cone-shaped horn antenna after 24 times frequency multiplication of a Ku band sweeping generator in the transmitting chain, and the transmitting power is greater than 5 mW. The PRF of the transmitting signal is 1000, and the sample number of each pulse is 2048. In order to verify the envelope correction method, we designed two experiments in this paper. Experiment 1 is on two rotating corner reflectors driving by a motor, as shown in Figure 4a. The rotating radii are 0.18 m and 0.32 m, respectively. The rotating angle velocity is set to rad/s, corresponding to the micro-motion period of s. Experiment 2 is on a precession warhead model, and the precession angle velocity is rad/s, corresponding to the micro-motion period of s (Figure 4b). The radar system and the warhead model are placed in an absorbing chamber during the experiment in order to reduce the impact of the background noise.

Through dechirp receiving, the terahertz echo signal is down conversed to baseband and transmitted to the PC for further processing after I/Q demodulator and A/D sampling. The HRRPs in two experiments are shown in Figure 5. Obviously, the HRRPs are disordered due to the adjustment of the reference range and the motion of the targets.
According to the adjacent correlation correction principle mentioned in Section 2, the rough correction results of the micro-motion targets are shown in Figure 6. However, due to the inherent defects of this method, jump error has appeared in both experiments. In addition, there is also drift error in the HRRP of the warhead model.
In order to correct the jump error, we applied the jump error correction method based on the periodicity of the HRRP to Figure 6. Since this method is heavily dependent on the estimation of micro-motion period, the estimation results of micro-motion period based on autocorrelation were shown firstly in Figure 7. As can be seen from Figure 7, the micro-motion period can be estimated accurately before envelope correction, which is the foundation of jump error correction. The estimated micro-motion periods of the corner reflectors and the warhead model are 4 s and 2 s, which are in good agreement with the settings. The HRRPs of the micro-motion targets after jump error correction are shown in Figure 8. At this point, the jump error has been well corrected and the HRRP sequences show their continuity. However, drift error in experiment 2 still remains to be compensated.
As for drift error in experiment 2, we extracted the initial drift range of the warhead-top scatterer by Viterbi algorithm and fitted it using the nonlinear fitting model discussed in Section 2. Then the fine compensation range was obtained according to the fitting parameters, and has been carried on drift error compensation. The nonlinear fitting result and the HRRP of the precession warhead model after drift error compensation are shown in Figure 9. It can be seen from Figure 9b that the drift error has been well compensated. The results verify the efficiency of the method proposed in this paper.

3.3. Performance Analysis of the Method

Previous research investigations on imaging of micro-motion targets are partly based on echo separation of the micro-motion part and the rigid part. In this case, envelope correction can be realized relying on the range profile of the rigid part. The other part treated the micro-motion part as interference, and focused on micro-motion suppression. Therefore, there are few studies about envelope correction of the micro-motion targets at present, and the methods in reference [7,8] are not applicable to our situation. In essence, the method in this paper is an improvement of the adjacent correlation method in ISAR imaging. An effective improvement was proposed to make it suitable for micro-motion targets. So we compared the proposed method with the traditional adjacent correlation method in this section.
Until now, research on envelope correction of micro-motion targets is quite limited, not to speak of the evaluation standard. Therefore, in order to analyze the performance of our method, we put forward an evaluation standard based on inverse Radon transform (IRT) according to the sinusoidal modulation characteristics of the micro-motion targets. IRT is a classical approach to curve detection, and has been widely used in radar applications, such as parameter estimation and imaging of micro-motion targets. It can map sinusoidal curves to peaks in parameter space according to the image reconstruction theory, and the locations and the focusing performance of the peaks are directly associated with the characteristics of the sinusoidal curves [18]. If there is a sinusoidal curve in the center of the input image, the image can be represented by the 2D form where and stand for the horizontal and vertical axis of the input image, respectively. and is the amplitude and the initial phase of the sinusoidal curve. The image after IRT may be written as shown below according to the Fourier slice theorem. where, , . It is obvious that the sinusoidal curve in the input image is mapped to a point in parameter space by IRT. In addition, the parameters of the sinusoidal curve have the following relationship with the location of the peak.
However, when the sinusoidal curves are discontinuous or declining, the focusing performance of peaks in parameter space will deteriorate severely. In other words, we can treat the focusing performance of peaks in parameter space as an evaluation standard of envelope correction method of micro-motion targets. Therefore, in order to compare the performance of the adjacent correlation method and our method in this paper, the IRT results of the HRRP sequences through adjacent correlation method and our method are shown in Figure 10 and Figure 11. In Figure 10a, the peaks corresponding to the two micro-motion corner reflectors did not focus well compared with Figure 10b because the HRRP sequence in Figure 6a is discontinuous. The sinusoidal fragment which is not in the center of the input image has no contribution to the integration operation during IRT. In Figure 11a, the IRT result of the HRRP sequence in Figure 6b is completely defocusing because of the drift error and the jump error. However, after correction by our method, the sinusoidal trajectory of the warhead top is very clear and its IRT result in Figure 11b focuses well. The IRT results of the HRRP sequences after envelope correction by our method demonstrate the excellent performance of the method proposed in this paper. Moreover, for the quantitative evaluation of the methods, the section curves of peaks in Figure 10 and Figure 11 are presented in Figure 12. Comparison of the section curves proves again that the impact of jump error and drift error in the adjacent correlation method is serious, and it can be overcome by the method in this paper.

For micro-motion targets in the terahertz ISAR applications, an envelope correction method was proposed in this paper. Unlike the traditional envelope correction methods in a small-angle model, our method can adjust the range profile sequence and make it sinusoidal over time. According to the characteristics of the micro-motion targets, the basic operation adopted in the method is adjacent correlation criterion, even though it has two inherent defects—jump error and drift error. Therefore, after envelope correction based on adjacent correlation, a jump error correction method based on the periodicity of the HRRP was proposed. It takes full advantage of the similarity of range profiles at the same location of each micro-motion period, and takes the weighted sum of range profiles of other periods that sharing the same location with the current range profile as the reference signal. As for drift error, we proposed a correction method based on the sinusoidal characteristic of the HRRP. The parameters of the initial drift range can be fitting by a nonlinear model, and the fine compensation range can be deduced by the initial drift range and its fitting parameters. Finally, we built a 330 GHz imaging radar system and carried out two experiments on rotating corner reflectors and a precession warhead model, respectively. The experimental results verify the validity of the method. However, this method is not suitable for real-time processing because the nonlinear fitting relies on the global property of the range profile sequence, and the real-time envelope correction method for micro-motion targets in the terahertz ISAR imaging still need further research.

This work was supported by the National Natural Science Foundation of China (Grant No. 61571011).

Q.Y. conceived the experiments, conducted the theoretical analyses and wrote the paper; Y.Q. and H.W. provided the experimental equipment and analysis tools; B.D. and Y.Z. revised the manuscript and put forward some practical suggestions. 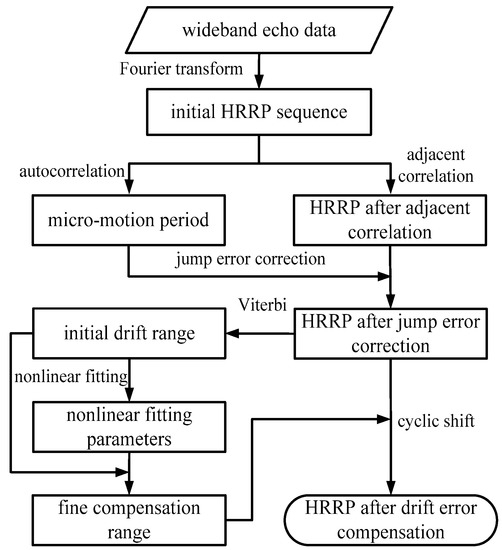 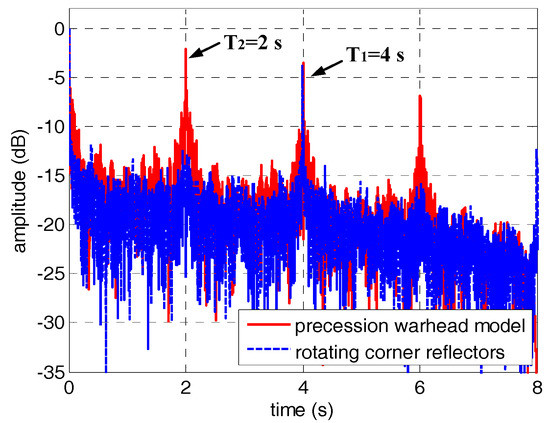