A Red-Emitting, Multidimensional Sensor for the Simultaneous Cellular Imaging of Biothiols and Phosphate Ions
Previous Article in Special Issue

In this paper, we investigate the use of decentralized blockchain mechanisms for delivering transparent, secure, reliable, and timely energy flexibility, under the form of adaptation of energy demand profiles of Distributed Energy Prosumers, to all the stakeholders involved in the flexibility markets (Distribution System Operators primarily, retailers, aggregators, etc.). In our approach, a blockchain based distributed ledger stores in a tamper proof manner the energy prosumption information collected from Internet of Things smart metering devices, while self-enforcing smart contracts programmatically define the expected energy flexibility at the level of each prosumer, the associated rewards or penalties, and the rules for balancing the energy demand with the energy production at grid level. Consensus based validation will be used for demand response programs validation and to activate the appropriate financial settlement for the flexibility providers. The approach was validated using a prototype implemented in an Ethereum platform using energy consumption and production traces of several buildings from literature data sets. The results show that our blockchain based distributed demand side management can be used for matching energy demand and production at smart grid level, the demand response signal being followed with high accuracy, while the amount of energy flexibility needed for convergence is reduced.
Keywords: blockchain technology; smart contracts; demand response; smart energy grid blockchain technology; smart contracts; demand response; smart energy grid

(1)
The transactions are registered by each DEP and shared with all the other energy parties interested to the same share of flexibility (DSOs, but also TSOs, retailers, etc.) to be validated and mined in future blocks;
(2)
the blocks are replicated and the distributed ledger is updated to reflect the state of the grid;
(3)
for each DEP, self-enforcing smart contracts check if the share of energy flexibility actually provided matches the expected levels agreed in the DR events;
(4)
all DEPs collectively verify the entire blockchain, and the energy transactions are not considered to be fully ‘confirmed’ until they are validated and aggregated in new blocks which are added to the ledger;
(5)
the share of contracted flexibility effectively delivered and the financial settlement are calculated using ledger information and the reward/penalty rates defined in the DR events.

The blockchain based management of the smart energy grids provides solutions to many of the problems identified for the traditional, centralized approach as depicted in Table 1. The adoption of the blockchain concepts will transform the smart grid into a democratic community that no longer relies on a central authority, but can take any decision through smart contract rules enforced and verified by each DEP of the grid. Furthermore, the traditional centralized management of the smart grid that is prone to single point of failure vulnerabilities is replaced with a decentralized approach, where the statistics, transactions, control services, and payment settlements are all computed and verified in a distributed manner by each node in the network.

In our approach, a smart contract is a piece of code that defines the expected energy flexibility levels of each DEP for participation in DR programs and the rules for assuring the grid level balance between energy demand and energy production. The rules may describe the behavior of DEPs during demand response events or may even address various constraints for maintaining the grid stability and reliability. These contracts are registered in the blockchain and are triggered by new energy transactions (i.e., registering new energy data from the IoT smart meters), which will make each blockchain node update its state based on the results obtained after running the smart contract. However, even if the term is “contract”, the smart contract should be an agent that has state variables, enforces the associated rules, and can be triggered at any point after its successful deployment.

The voluntary enrolment of each DEP in a DR event is regulated using self-enforcing smart contracts. Such a contract defines the DEP’s baseline energy profile, current monitored energy values, and expected energy profile, including the expected adjustments in terms of the amount of energy flexibility to be shifted during DR event time intervals (see Table 2).
The data acquired by each energy metering device associated with a DEP is stored in blockchain and triggers the smart contract execution. We have defined the current energy profile of the DEP as an energy curve to which the current monitored energy values are added: where is a time series observation [41] of energy demand, t is the time index (time at which the value was acquired), and is the total number of observations.
As participant in the DR event, the DEP receives from the DSO a control signal () through which it is requested to adjust its energy profile to the levels provided by the signal. The is calculated by the DSO considering the difference between the total amount of energy production and consumption at grid level, normalized to the baseline energy consumption of each DEP: where is the baseline energy demand of a DEP, and are the total amount of energy consumption and production at grid level forecasted by the DSO, respectively, while represent the interval of the DR event. In Equation (2), the second term of the addition represents the energy demand adjustment to the DEP demand baseline during the DR event.
The provisioning of a DR signal by a DEP is registered in the ledger, thus, the smart contract checks in near real time the monitored energy consumption data against the DR signal to detect any significant deviations and notifies the DSO. The deviations are determined as: where represents the interval of the DR event. If value is close to 0, no significant deviation is registered and DEP complies with the DR signal. A positive value () signals that the DEP has not reduced its energy demand as requested, while a negative value () signals that the DEP has decreased its energy demand to much.
In case of significant positive or negative deviations (over 10% of the DR signal) the smart contract calculates the associated penalties for DEP. Otherwise the DEP is rewarded considering the DR revenue rates () and how much of the DEP energy demand profile has been adapted during a DR event. The rewards and penalties are established by the DSO considering the average energy price in the grid. Usually, the penalty rate for under-compliance is the greater than average daily revenue rates (i.e., ) [42]. In our approach, the total penalty for non-compliance is calculated considering the penalty rate () and the deviation registered for a DEP:
To determine how much a DEP has adapted its energy demand profile (i.e., the degree of this adaptation) to the , having as reference its Baseline Energy Profile, we used the Adaptability Power Curve (APC) metric defined in the context of the EU (European Union) Smart City Cluster [43]: where is the baseline energy demand of a DEP, and is its actual adjusted energy demand during the DR event time interval. APC ranges from 0.0 to 1.0, with 0.0 meaning that the DEP has not adapted its demand to the and 1.0 meaning that the energy demand was adapted and its deviation from the is zero.
The total incentives for a DEP for its adaptation during a DR event is calculated by the DSO using the formula: where is the daily revenue rate for each kW of energy shifted established by the DSO or a discount rate on the regular electricity bill.

In this paper, we propose a decentralized solution for managing demand response programs in the context of Smart Grids. We integrate the elements of the grid with a blockchain architecture and associated smart contracts to ensure the programmatic definition of expected energy flexibility levels, the validation of DR agreements, and balance between energy demand and energy production. A prototype was implemented in Ethereum to validate and test the blockchain based decentralized management using energy traces of UK building datasets. The results are promising, showing that the grid is capable of timely adjustments of the energy demand in near real time by enacting the expected energy flexibility levels and validating all the DR agreements. Also, it paves the way for setting up a pure peer-to-peer decentralized energy trading mechanism, which will not include any intermediary third party like the DSO, with an impact in term of energy transaction cost reduction. Thus, future improvements will aim to implement multi-stakeholder markets (DSOs, TSOs, retailers as competitors or cooperators for the same energy flexibility) using our blockchain peer-to-peer demand response management platform.

This work has been conducted within the eDREAM project Grant number 774478, co-funded by the European Commission as part of the H2020 Framework Programme (H2020-LCE-2017-SGS). 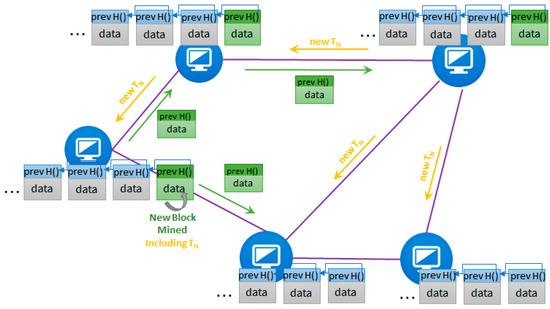 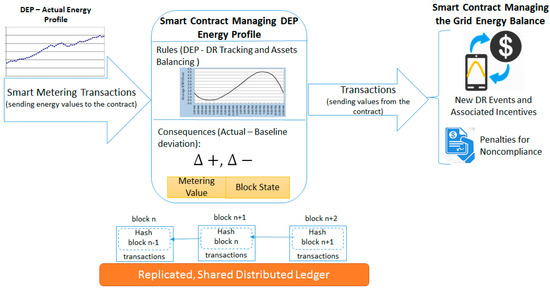 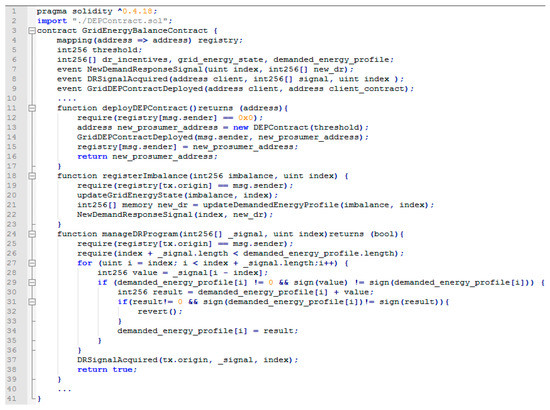 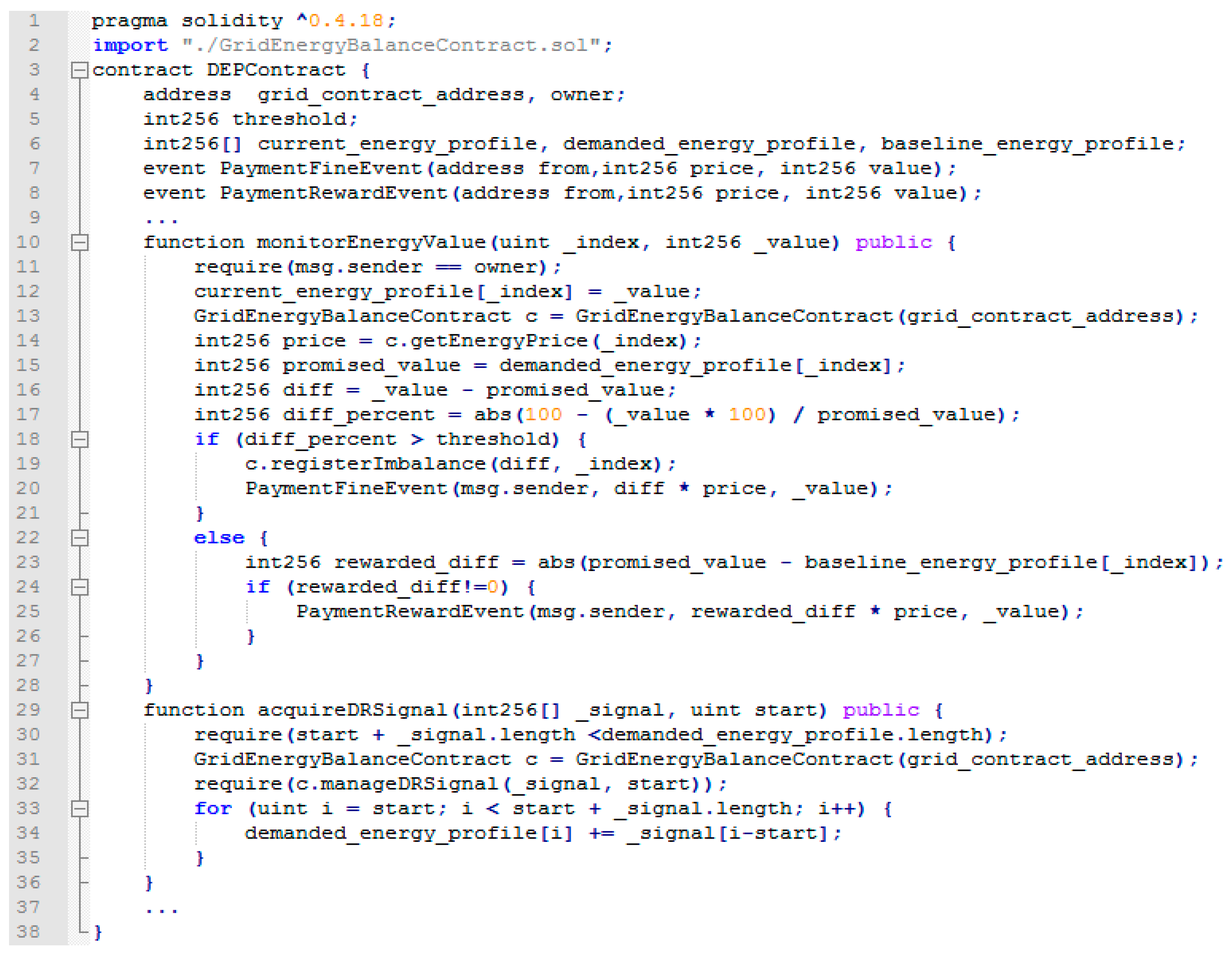