Olive has a notable importance in countries of Mediterranean basin and its profitability depends on several factors such as actual yield, production cost or product price. Actual “on year” Yield (AY) is production (kg tree−1) in “on years”, and this research attempts to relate it with geometrical parameters of the tree canopy. Regression equation to forecast AY based on manual canopy volume was determined based on data acquired from different orchard categories and cultivars during different harvesting seasons in southern Spain. Orthoimages were acquired with unmanned aerial systems (UAS) imagery calculating individual crown for relating to canopy volume and AY. Yield levels did not vary between orchard categories; however, it did between irrigated orchards (7000–17,000 kg ha−1) and rainfed ones (4000–7000 kg ha−1). After that, manual canopy volume was related with the individual crown area of trees that were calculated by orthoimages acquired with UAS imagery. Finally, AY was forecasted using both manual canopy volume and individual tree crown area as main factors for olive productivity. AY forecast only by using individual crown area made it possible to get a simple and cheap forecast tool for a wide range of olive orchards. Finally, the acquired information was introduced in a thematic map describing spatial AY variability obtained from orthoimage analysis that may be a powerful tool for farmers, insurance systems, market forecasts or to detect agronomical problems. View Full-Text
Keywords: olive; production forecast; manual canopy volume; individual crown area; tree mapping olive; production forecast; manual canopy volume; individual crown area; tree mapping
►▼ Show Figures 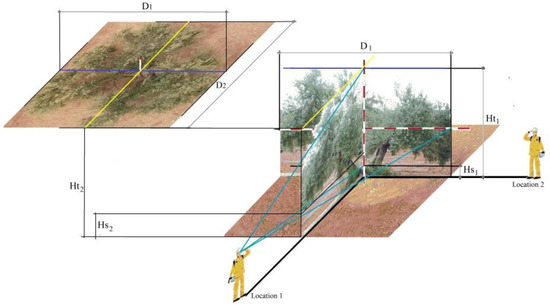