This study aimed to evaluate changes in the aboveground net primary productivity (ANPP) of grasslands in the Pampa biome by using experimental plots and changes in the spectral responses of similar vegetation communities obtained by remote sensing and to compare both datasets with meteorological variations to validate the transition scales of the datasets. Two different geographic scales were considered in this study. At the local scale, an analysis of the climate and its direct influences on grassland ANPP was performed using data from a long-term experiment. At the regional scale, the influences of climate on the grassland reflectance patterns were determined using vegetation sensor imagery data. Overall, the monthly variations of vegetation canopy growth analysed using environmental changes (air temperature, total rainfall and total evapotranspiration) were similar. The results from the ANPP data and the NDVI data showed the that variations in grassland growth were similar and independent of the analysis scale, which indicated that local data and the relationships of local data with climate can be considered at the regional scale in the Pampa biome by using remote sensing. View Full-Text
Keywords: biomass; scale; climate analysis; NDVI biomass; scale; climate analysis; NDVI
►▼ Show Figures 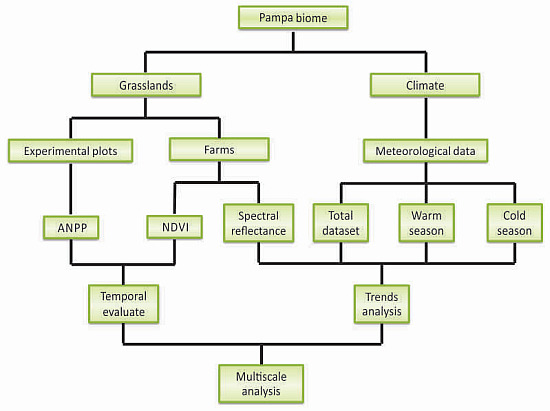