Fluorescence monitoring of endogenous microRNA (miRNA or miR) activity related to neuronal development using nano-sized materials provides crucial information on miRNA expression patterns in a noninvasive manner. In this study, we report a new method to monitor intracellular miRNA124a using quantum dot-based molecular beacon (R9-QD-miR124a beacon). The R9-QD-miR124a beacon was constructed using QDs and two probes, miR124a-targeting oligomer and arginine rich cell-penetrating peptide (R9 peptide). The miR124a-targeting oligomer contains a miR124a binging sequence and a black hole quencher 1 (BHQ1). In the absence of target miR124a, the R9-QD-miR124a beacon forms a partial duplex beacon and remained in quenched state because the BHQ1 quenches the fluorescence signal of the R9-QD-miR124a beacon. The binding of miR124a to the miR124a binding sequence of the miR124a-targeting oligomer triggered the separation of the BHQ1 quencher and subsequent signal-on of a red fluorescence signal. Moreover, enhanced cellular uptake was achieved by conjugation with the R9 peptide, which resulted in increased fluorescent signal of the R9-QD-miR124a beacons in P19 cells during neurogenesis due to the endogenous expression of miR124a. View Full-Text
Keywords: quantum dot; microRNA; molecular beacon; neurogenesis quantum dot; microRNA; molecular beacon; neurogenesis
►▼ Show Figures 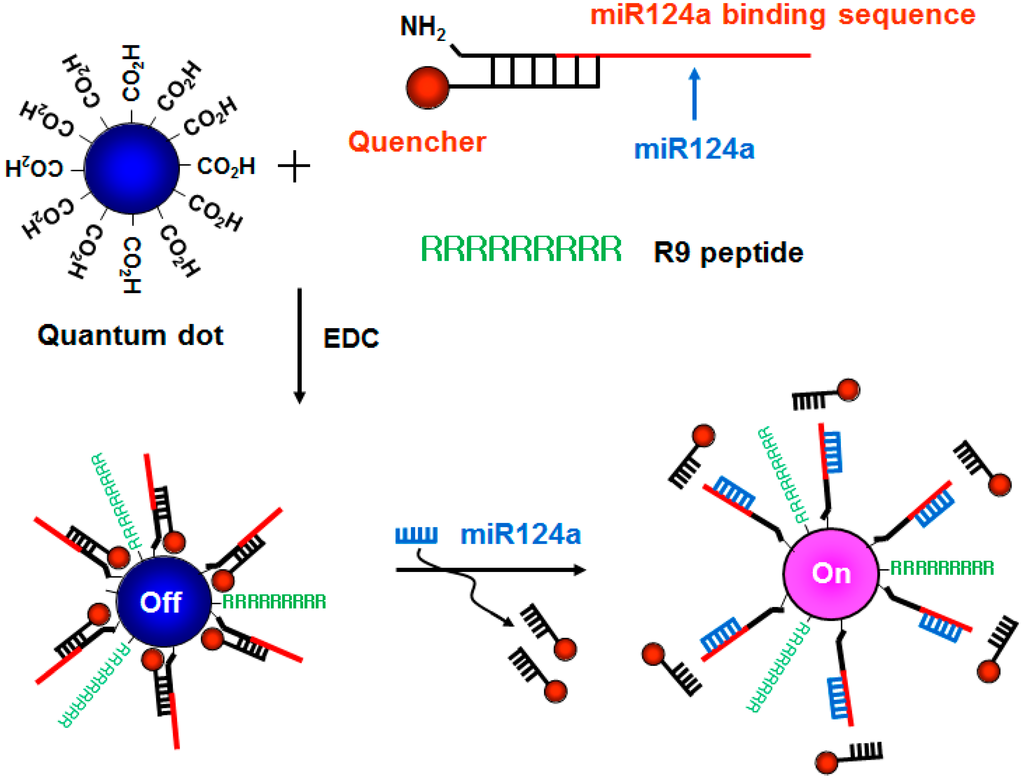