Compared with traditional acoustic pressure sensor arrays, acoustic vector sensors can measure the acoustic pressure as well as all three orthogonal components of the acoustic particle velocity at a single point in space, which offers certain significant advantages in collecting more acoustic information and enhancing the system performance [1–6]. Since the measurement model of an acoustic vector sensor array was developed in [2], researchers mainly turned to the study of incoming signal direction of arrival (DOA) estimation and have proposed many DOA estimation algorithms, which include the Capon technique [4], estimation of signal parameters via rotational invariance technique (ESPRIT) [7–9], root multiple signal classification (MUSIC) [10], self-initiating MUSIC [11], hypercomplex [12], propagator method (PM) [13], trilinear decomposition or parallel factor (PARAFAC) [14], as well as others [15–21]. The subspace-based methods, such as ESPRIT [7–9] and MUSIC [10,11], require eigenvalue decomposition (EVD) of the cross correlation matrix and singular value decomposition (SVD) of the received data to obtain the signal subspace or noise subspace, which implies fairly high computational complexity, while the propagator method (PM) is considerably less demanding because the PM does not require any EVD of the cross correlation matrix and SVD of the received data [22]. However, only in high-snapshots situation and signal to noise ratio (SNR), can the PM algorithm provide a better estimation performance. In most current algorithms for DOA estimation, some precise a priori knowledge, including the sensor locations, gain, phase response and mutual coupling of the receiver array is needed, but in realistic situations this can seldom be pre-known. For example, Capon [4] and the MUSIC algorithm can be used for arbitrary arrays, however they need to pre-know the array geometry. Besides, peak searching is also required for Capon and MUSIC algorithms, which renders a heavier computational cost. EVD of the cross spectral matrix or SVD of the received data to obtain the signal subspace is needed for the ESPRIT algorithm [7], which has been used for two dimensional (2D) DOA estimation for arbitrarily spaced arrays at unknown locations based on the acoustic vector-sensor property. However, a problem existing in [7] is that the ESPRIT algorithm needs an extra pair matching which increases the computational load, and usually fails to work in lower SNR when it is used for 2D-DOA estimation. Reference [14] proposes a trilinear decomposition-based 2D-DOA estimation algorithm for acoustic vector sensor arrays, which provides DOA estimation for the arbitrarily spaced sensor arrays and doesn't require knowledge of sensor locations and extra pair matching.

The trilinear decomposition, also known as PARAFAC analysis [25,26], has been naturally related to angle estimation for arbitrarily spaced acoustic vector-sensor arrays at unknown locations [14]. However, the PARAFAC angle estimation solution is usually non-unique when the coherent sources exist. The PARALIND model [27,28] is a generalization of PARAFAC suitable for solving problems with linear dependent factors where PARAFAC analysis will fail to provide meaningful results. Our work links the coherent angle estimation problem to the PARALIND model, and proposes a PARALIND decomposition-based coherent angle estimation algorithm for arbitrary arrays, which can be regarded as an extension of the work presented in [14]. Reference [27] proposed the PARALIND model for application in biology and chemistry; the present paper expands this model to the acoustic vector-sensor array signal processing problem to estimate coherent DOA and automatically achieve paired two-dimensional angle estimations, which is an innovation.

Although the ESPRIT algorithm [7] and our algorithm can be used for DOA estimation for arbitrarily spaced acoustic vector-sensor arrays, there are some differences between our paper and Reference [7]. The latter proposed an ESPRIT algorithm for DOA estimation for arbitrarily spaced three-dimensional arrays of vector hydrophones, but it fails to work well for coherent sources. Our work exploits the PARALIND decomposition approach to estimate 2D-DOA in arbitrarily spaced acoustic vector-sensor arrays with unknown locations, and our algorithm is suitable for coherent sources.

The present paper is structured as follows: Section 2 develops the data model for arbitrarily spaced acoustic vector-sensor arrays at unknown locations; Section 3 establishes our PARALIND decomposition-based coherent 2D-DOA angle estimation algorithm in addition with the identifiability issues and complexity analysis; In Section 4, simulation results are presented to verify effectiveness of the proposed algorithm, while the final conclusions are made in Section 5.

We assume that a total of K narrowband plane waves impinge on an array equipped with M acoustic vector sensors, which are all located at arbitrary unknown three dimensional positions as shown in Figure 1. We define the location of the mth vector sensor as rm = (xm, ym, zm).

We also assume the signals in the far-field. K sources, including K1 incoherent sources and K-K1 coherent sources, are considered. Assume that the noise is additive white Gaussian, which is independent of the sources. The kth signal arrives from direction (ϕk, φk), where ϕk and φk respectively stand for the azimuth angle and the elevation angle. Let θk = [ϕk, φk]T as the 2D-DOA of the kth source. According to [2], the output at the acoustic vector sensors array can be expressed as:

Therefore, the output of J snapshots can be given by:

X can be compactly expressed as:

Define Ỹ = XT, according to the signal model in Equation (4), Ỹ can be expressed as:

According to [27], least fitting for the signal model in Equation (5) amounts to:

In a no-noise case, according to Equation (5), we have:

According to [7], stacking these vectors leads to:

Equation (9) can be expressed compactly as:

According to Equation (10), we can obtain:

For attaining vec(ΓT), then Γ can be easily updated via transforming the column vector to its original column-wise matrix.

According to Equation (6), the least square (LS) update for ST is given by:

According to Equation (7), we have:

A has full column rank, so we can acquire A* via:

Extracting the diagonal elements of the matrices in two sides of the equation, we get:

According to Equations (11), (12), (14), and (17), we can show PARALIND algorithm applied in the data model established in this paper in detail as follows:

According to Equation (11), the update for vec(Γ̂T) is given by:

According to [27], we derive the uniqueness of PARALIND decomposition in an acoustic vector-sensor array. The signal matrix in Equation (7) can be transformed to another equivalent matrix via column and row exchanging, which can be expressed as:

H being full row rank assures that , where U consists of largest K left singular vectors of the matrix . The matrix U can be denoted as:

where T is a nonsingular matrix. Construct auto and cross correlation matrices as follows: where G = THHHH, R1 and R2 are full rank. According to Equation (26), we obtain:

Λ and G consist of the eigenvalues and the corresponding eigenvectors of the matrix R2R1−1. Λ is unique, and G is recovered with the scale ambiguity and permutation ambiguity. Then T = G−1R1, H = U1T−1, SE = H+Zi, AT = Di−1((ΓS)T) SE.

By imposing PARALIND decomposition for the received data matrix, we get the estimate of matrix Ĥ = [ĥ1,ĥ2, ⋯,ĥK]. According to Equation (2), ĥK can be expressed as:

where ĥK is the normalized kth column vector of the estimated Ĥ. Then the elevation angle estimate of kth source can be easily obtained via:

Finally, the azimuth angle estimate of kth source can be attained via:

Obviously, the azimuth angle and elevation angle are automatically paired. We also obtain the estimate of the correlated matrix Γ from the PARALIND decomposition, because Γ is a matrix whose elements are 0 or 1, so we can easily decide it by a decision function to obtain accurate estimated Γ̂.

3.4. The Procedures of the Proposed Algorithm

Till now, we have achieved the proposal for the proposed coherent 2D-DOA estimation algorithm for the acoustic vector-sensor array. We show major steps of the proposed algorithm as follows:

Obtain Ỹ from the received data matrix X, and then initialize for the matrices H, A, Γ, and S.

Estimate the two-dimensional DOA through Equations (28)-(30), then obtain accurate estimate Γ̂ by decision.

Remark B: The PARALIND decomposition brings the same permutation ambiguity for the estimated Ĥ, Â, and Γ̂, so the elevation and azimuth angles and the correlated matrix are automatically paired.

Remark C: If the number of sources K is unknown, it can be estimated by performing SVD for a slice Zi in Equation (22) and finding the number of largest singular values.

3.5. CRB and Advantages of the Proposed Algorithm

According to [29], we can derive the CRB of coherent angle estimation for the acoustic vector-sensor array with unknown locations as:

The advantages of the proposed algorithm can be presented as follows, which can be verified by the simulation results in Section 4:

The proposed algorithm is effective for coherent and incoherent two-dimensional angle estimation.

The proposed algorithm does not require precise knowledge of the characteristics of the receiver array.

The proposed algorithm can archive automatically paired angles and the corresponding correlated matrix.

The proposed algorithm has much better angle estimation performance than conventional FBSS-ESPRIT algorithm which only works for uniform array.

The proposed algorithm has considerably performance for angle estimation of closely spaced sources.

In most of the following simulations, we assume that there are 3 sources in which only source 1 and source 3 are coherent, namely the correlated matrix is .

where ϕk and φk denote the perfect azimuth and elevation angle of kth source, respectively. ϕ̂k,l and φ̂k,l are the estimates of ϕk and φk d in the lth Monte Carlo trail. 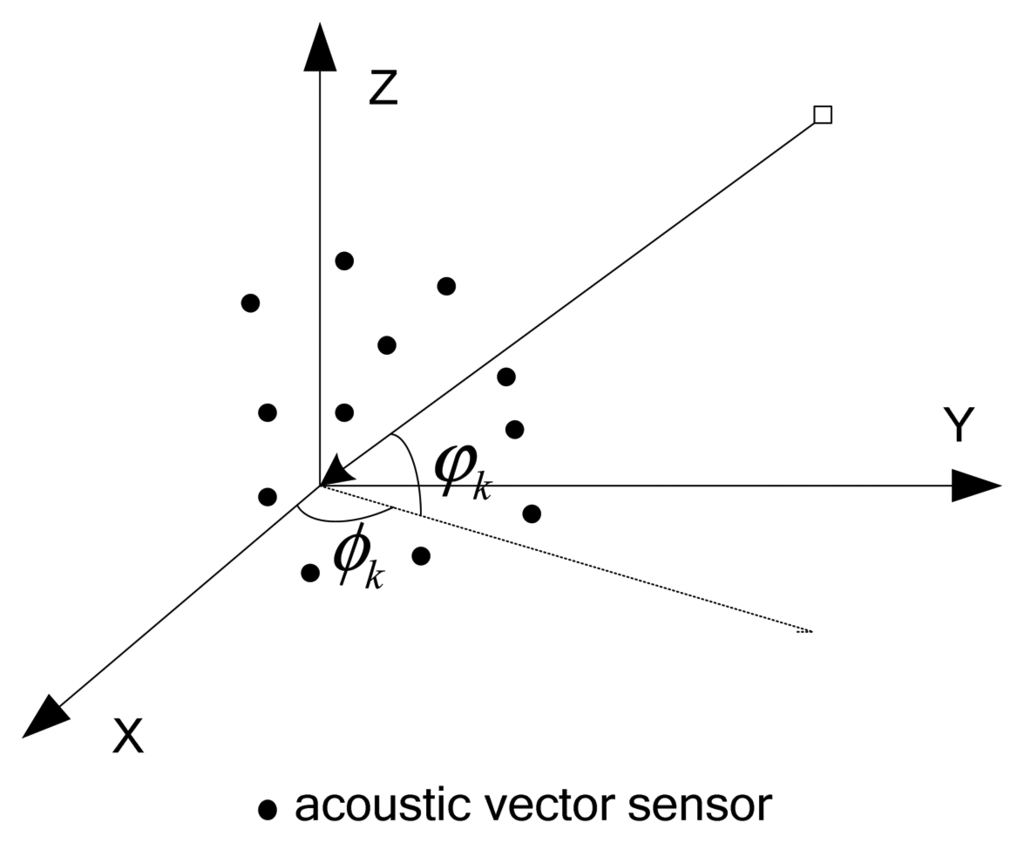 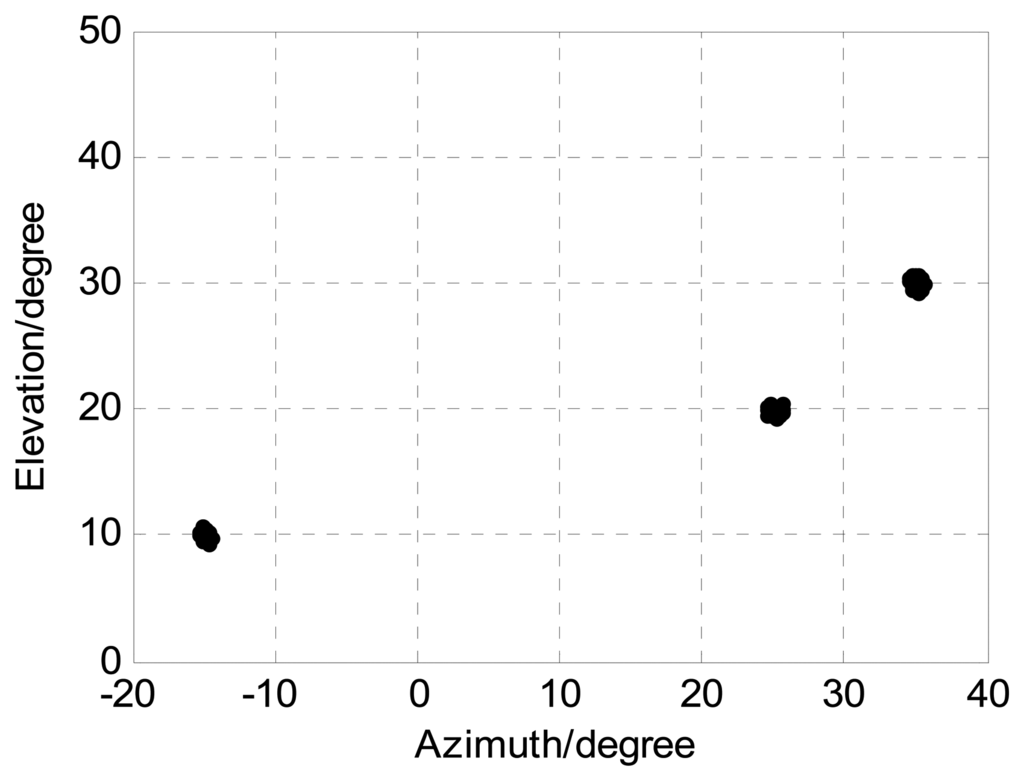 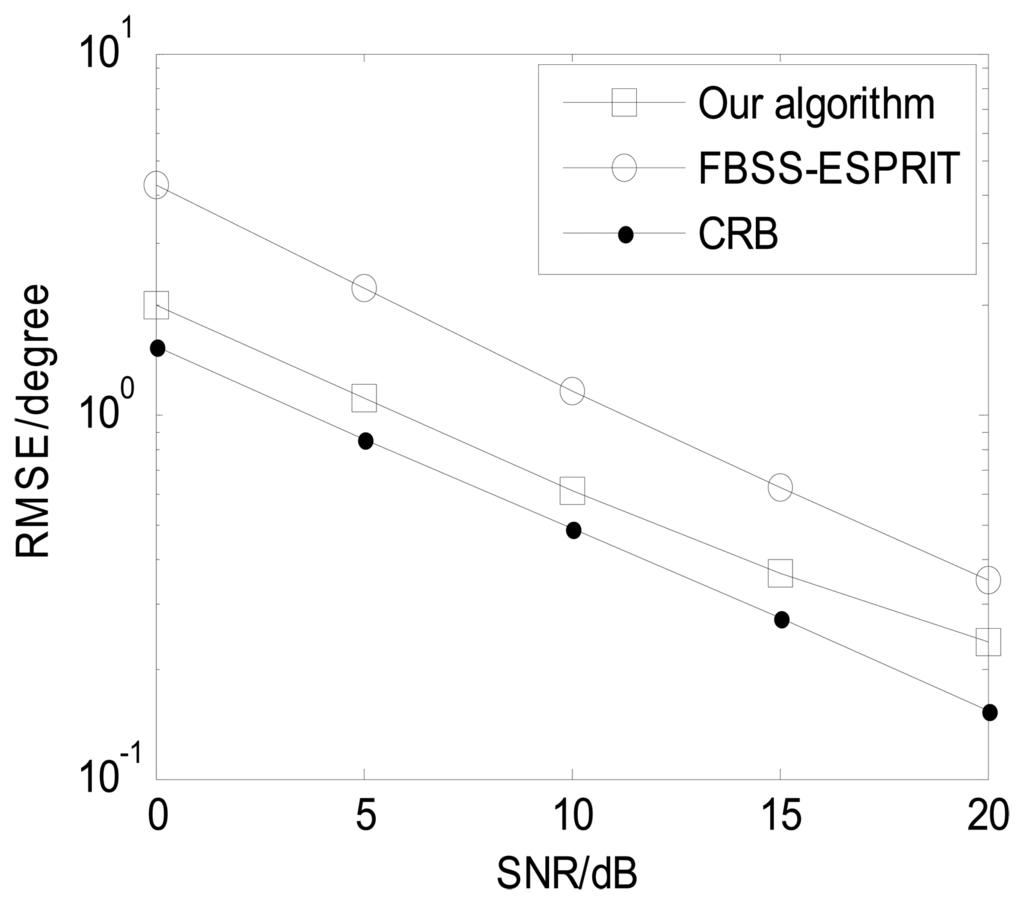 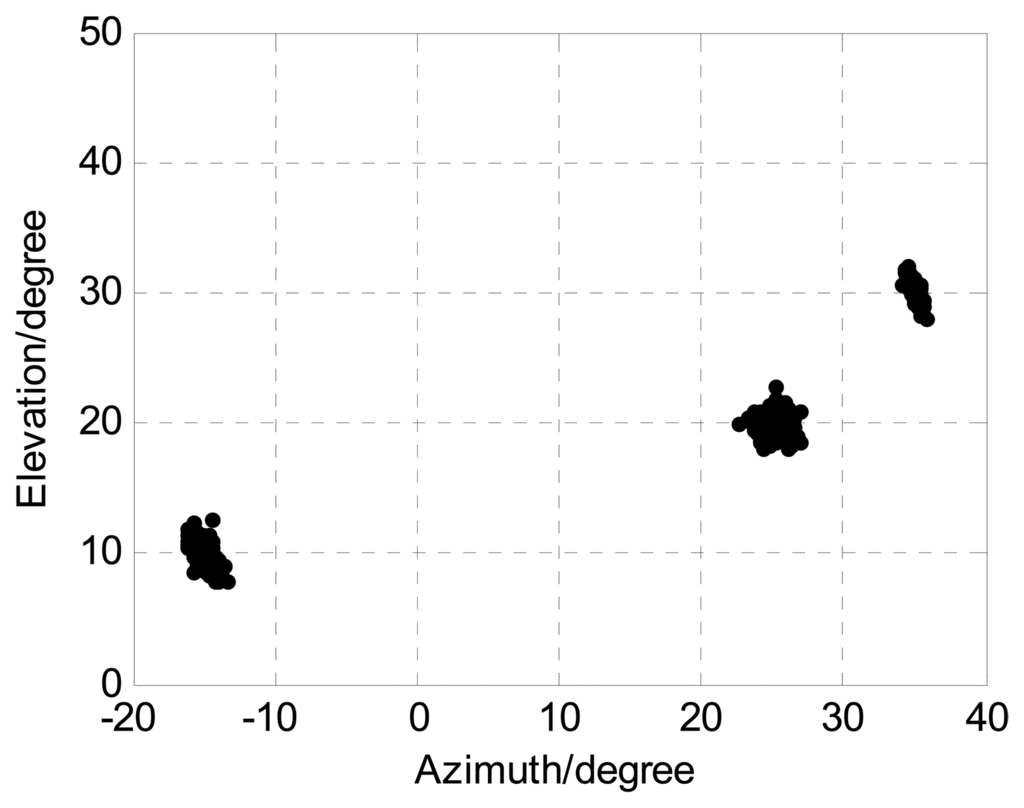 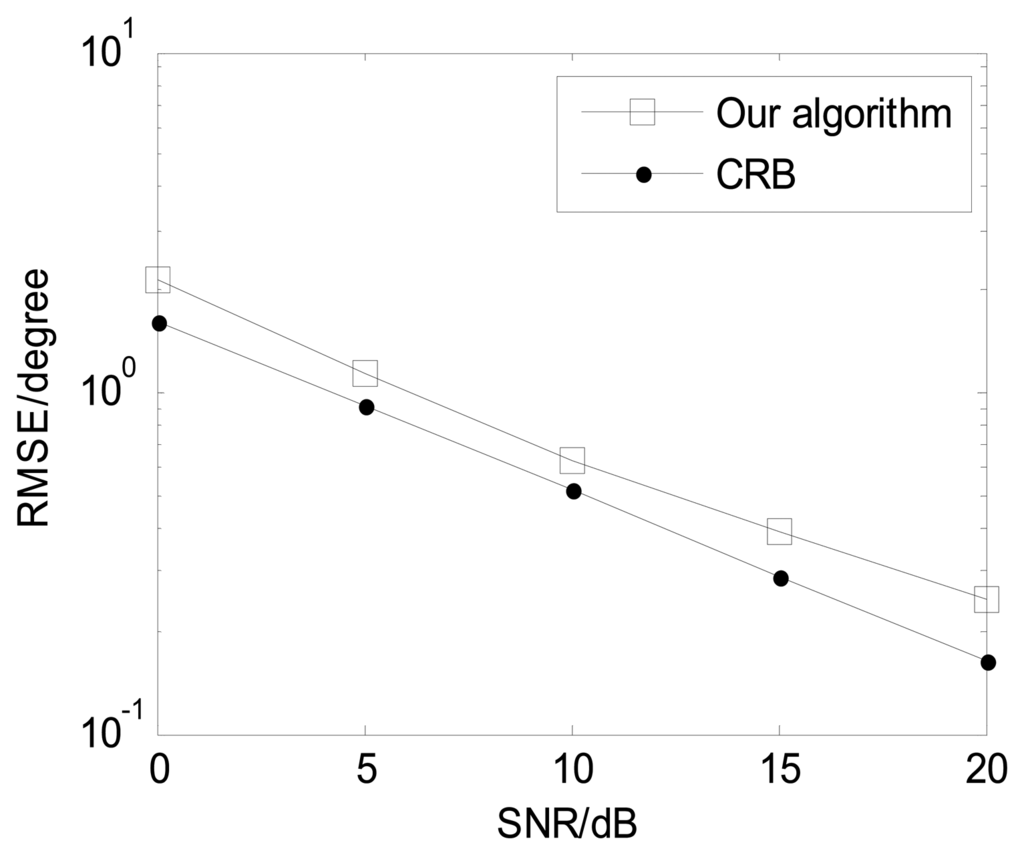 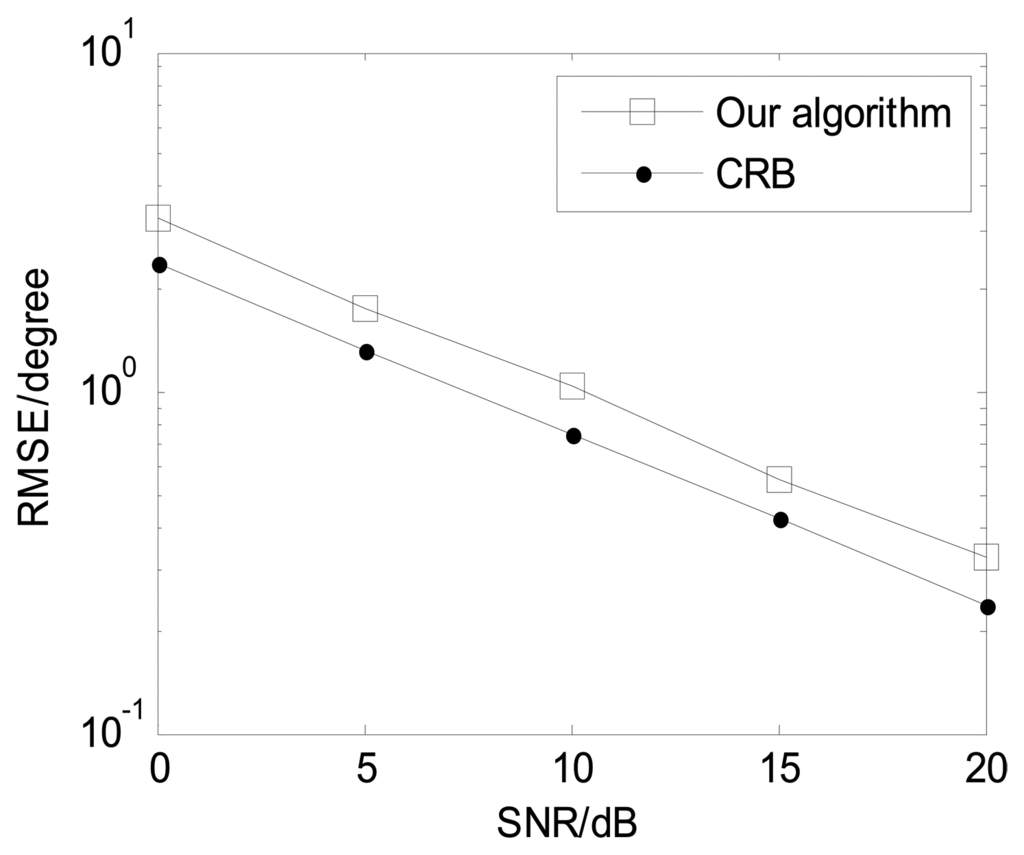 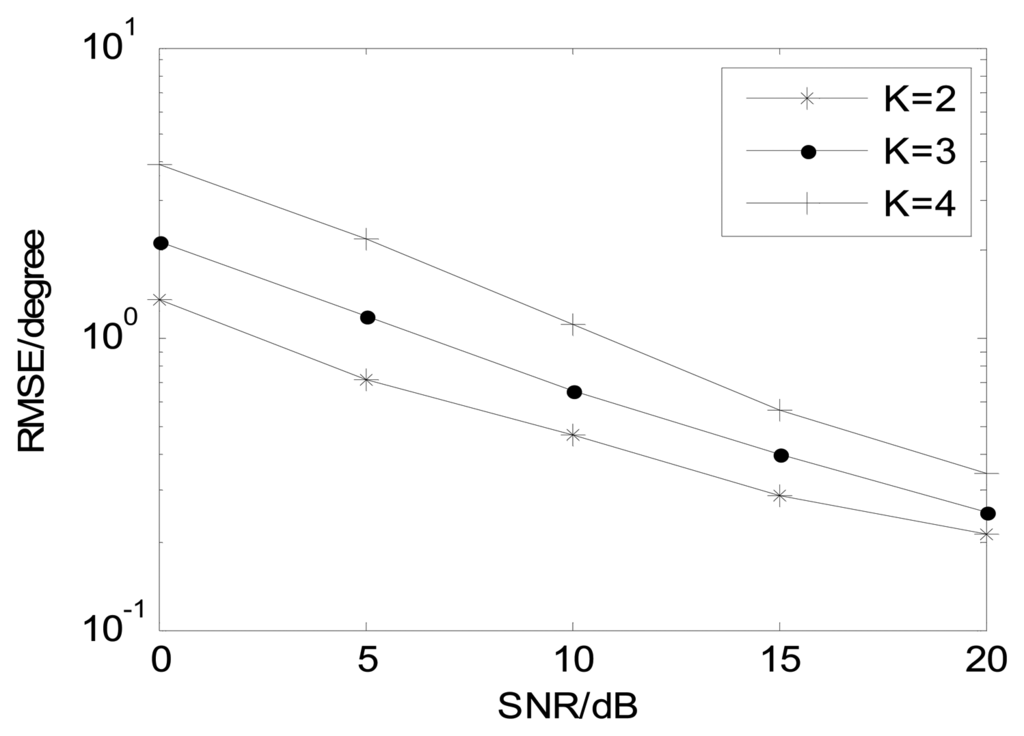