This study was conducted to develop a simple, rapid, and accurate lateral flow immunoassay (LFIA) detection method for point-of-care diagnosis. The one-dot LFIA for aflatoxin B1 (AFB1) was based on the modified competitive binding format using competition between AFB1 and colloidal gold-AFB1-BSA conjugate for antibody binding sites in the test zone. A Smartphone-based reading system consisting of a Samsung Galaxy S2 Smartphone, a LFIA reader, and a Smartphone application for the image acquisition and data analysis. The detection limit of one-dot LFIA for AFB1 is 5 μg/kg. This method provided semi-quantitative analysis of AFB1 samples in the range of 5 to 1,000 μg/kg. Using combination of the one-dot LFIA and the Smartphone-based reading system, it is possible to conduct a more fast and accurate point-of-care diagnosis.
Keywords: lateral flow immunoassay; aflatoxin B1; Smartphone; point-of-care lateral flow immunoassay; aflatoxin B1; Smartphone; point-of-care

Aflatoxins are known as a toxic secondary metabolites produced by the some species of fungi of the genus Aspergillus [1]. The International Agency for Research on Cancer (IARC) has classified the aflatoxins B1 (AFB1), B2 (AFB2), G1 (AFG1), and G2 (AFG2) as Group-1 carcinogenic substances [2].AFB1 is one of the most potent hepato-carcinogens known, and the long-term chronic exposure to extremely low levels of AFB1 in food and feed is an important consideration for human and animal health. Consequently, maximum residue levels (MRL) of aflatoxins for human food and animal feed have been set by the European Union (EU). For maize and rice to be subjected to sorting or other physical treatment before human consumption or use as an ingredient in foodstuffs, AFB1 and total aflatoxin limits have been set at 5 μg/kg and 10 μg/kg [3].

To analyze AFB1 and aflatoxins, Several analytical methods including thin-layer chromatography (TLC), high-performance liquid chromatography (HPLC), liquid chromatography-mass spectroscopy (LC-MS), gas chromatography-mass spectroscopy (GS-MS), and enzyme-linked immunosorbent assay (ELISA) have been developed [4–7]. Because these methods are time-consuming, use expensive equipment, and require specialists, they are unsuitable for point-of-care diagnosis. The lateral flow immunoassay (LFIA) has gained increasing interest to overcome those problems. LFIA offers a low-cost, rapid and sensitive detection, user-friendly operation, easy storage, and point-of-care diagnosis. Recently, LFIA has been studied to detect mycotoxins such as aflatoxin B1, ochratoxin A, and fumonisin B1 [8–11]. Particularly, some LFIAs for quantitative or semi-quantitative analysis have been developed using a reading device. As there is an increasing need for high performing LIFA in the clinical, environmental, self-diagnosis, agriculture, and food safety areas [12–16], conventional LFIA having readout errors to the naked eye is up against some major problems such as poor quantitative discrimination, and low analytical sensitivity. To make the most out of LFIA's advantages such as moderate price, rapid point-of-care diagnosis, and the absence of need of expensive equipment and skilled personnel, LFIA readers measuring the optical densities of the LFIA detection area have been developed for point-of-care applications.

The objective of this study was to develop a more simple, rapid, and accurate LFIA detection method than conventional LFIA method for point-of-care diagnosis. The novel one-dot LFIA based on the competitive immunoassay was developed for AFB1 detection and a Smartphone-based reading system composed of a Smartphone, LFIA reader, and Smartphone application was fabricated for quantitative or semi-quantitative analysis. Using the Smartphone-based reading system, this study was conducted to improve the detection limit and sensitivity of the one-dot LFIA for AFB1 in maize and minimize the readout errors caused by a visual detection.

The sample pad, nitrocellulose membrane, and conjugation pad were prepared, as previously described [17]. The sample pad was treated with 50 mM borate buffer, pH 7.4, containing 1% BSA and 0.05% Tween-20, and then dried overnight at 37 °C. The nitrocellulose membrane was blocked with PBS buffer. The conjugation pad was blocked with 50 mM borate buffer, pH 7.4, containing 10% sucrose, 2% BSA, and 0.05% Tween-20. And then, the membrane and conjugation pad were dried at 37 °C for 4 h. The test zone on the membrane was formed with 0.5 μL of AFB1-pAb (2.1 mg/mL in PBS), and allowed to dry at 37 °C for 3 h. 0.5 μL of colloidal gold-AFB1-BSA conjugate (colloidal gold:AFB1-BSA = 100:1) was applied to a conjugate pad and completely dried at 37 °C for 3 h. The sample pad, conjugate pad, nitrocellulose membrane, and absorption pad were assembled as the lateral flow strip. This strip was inserted into a plastic cassette, and these were stored at room temperature until use.

A maize sample was purchased from a retail store. The sample was ground using a household grinder and homogenized. Ground maize sample (25 g) was weighed and extracted with 125 mL of 5% methanol-PBS (v/v) using the mini shaker for 2 h. After centrifugation at 5,000 rpm, the clear supernatant was collected and analyzed. Different concentrations of AFB1 (0, 5, 10, 100, and 1,000 μg/kg) were added. Sample extract (100 μL) was added in the sample pad of the LFIA.

3.1. Detection Limit of LFIA for AFB1

Figure 5(a,b) show the peak and area values measured by the Smartphone-based reading system. In Figure 5(a), the peak value is sharply increased at 5 μg/kg and then increased linearly with the log concentration. On the contrary, the area value is distinctly decreased in the same range and then decreased linearly with log concentrations in Figure 5(b). It is possible to conduct the linear regression analysis in between 5 and 1,000 μg/kg. The correlation coefficients of peak and area values are 0.969 and 0.948, respectively. In Figure 5, we can definitely separate the blank sample from the contaminated sample using the Smartphone-based reading system. The other advantage of this system is represented by the objectivity of the result, which does rely on the subjective interpretation of an operator.

3.2. Cross Reactivity of LFIA for AFB1

Ochratoxin A (OTA) is mainly produced by Aspergillus and also found in grain products. AFB1 and OTA are known hepatotoxins and potential carcinogens, therefore, the cross-reactivity of LFIA for AFB1 was tested to evaluate the reactivity between AFB1-pAb and OTA using 0, 5, 10, 100, and 1,000 μg/kg of OTA. In the blank sample and samples contaminated by OTA, the colors of test zones were uniformly detected, as shown in Figure 6. The results showed no cross-reactivity between AFB1-pAb and OTA. It is shown that the one-dot LFIA can be used for the detection of AFB1 in animal feeds and food.

This work was supported by a grant from the Agenda Program (PJ008440), Rural Development Administration, Korea. 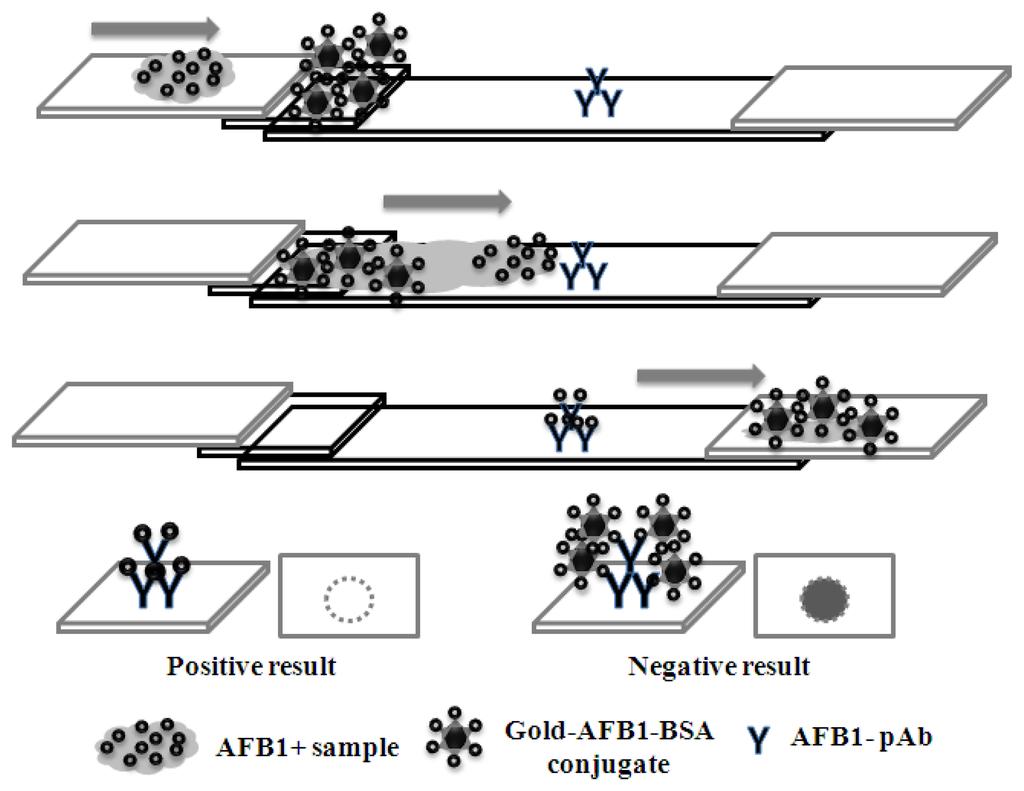 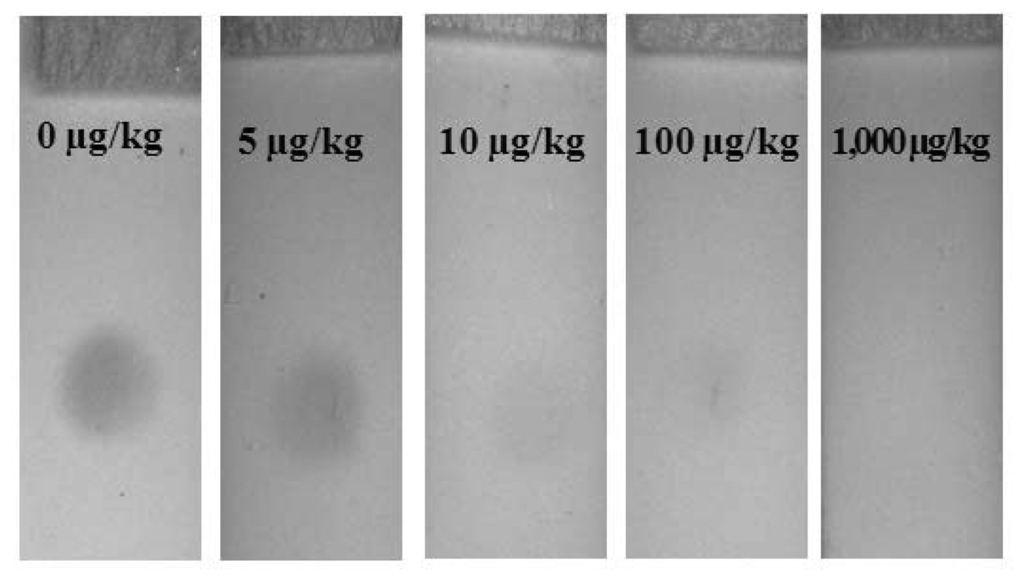