Microfabrication and Applications of Opto-Microfluidic Sensors
Previous Article in Journal

In the last ten to fifteen years there has been much research in using amorphous and polycrystalline semiconductors as x-ray photoconductors in various x-ray image sensor applications, most notably in flat panel x-ray imagers (FPXIs). We first outline the essential requirements for an ideal large area photoconductor for use in a FPXI, and discuss how some of the current amorphous and polycrystalline semiconductors fulfill these requirements. At present, only stabilized amorphous selenium (doped and alloyed a-Se) has been commercialized, and FPXIs based on a-Se are particularly suitable for mammography, operating at the ideal limit of high detective quantum efficiency (DQE). Further, these FPXIs can also be used in real-time, and have already been used in such applications as tomosynthesis. We discuss some of the important attributes of amorphous and polycrystalline x-ray photoconductors such as their large area deposition ability, charge collection efficiency, x-ray sensitivity, DQE, modulation transfer function (MTF) and the importance of the dark current. We show the importance of charge trapping in limiting not only the sensitivity but also the resolution of these detectors. Limitations on the maximum acceptable dark current and the corresponding charge collection efficiency jointly impose a practical constraint that many photoconductors fail to satisfy. We discuss the case of a-Se in which the dark current was brought down by three orders of magnitude by the use of special blocking layers to satisfy the dark current constraint. There are also a number of polycrystalline photoconductors, HgI2 and PbO being good examples, that show potential for commercialization in the same way that multilayer stabilized a-Se x-ray photoconductors were developed for commercial applications. We highlight the unique nature of avalanche multiplication in a-Se and how it has led to the development of the commercial HARP video-tube. An all solid state version of the HARP has been recently demonstrated with excellent avalanche gains; the latter is expected to lead to a number of novel imaging device applications that would be quantum noise limited. While passive pixel sensors use one TFT (thin film transistor) as a switch at the pixel, active pixel sensors (APSs) have two or more transistors and provide gain at the pixel level. The advantages of APS based x-ray imagers are also discussed with examples. View Full-Text
Keywords: x-ray image sensor; detector; direct conversion; x-ray photoconductor x-ray image sensor; detector; direct conversion; x-ray photoconductor
►▼ Show Figures 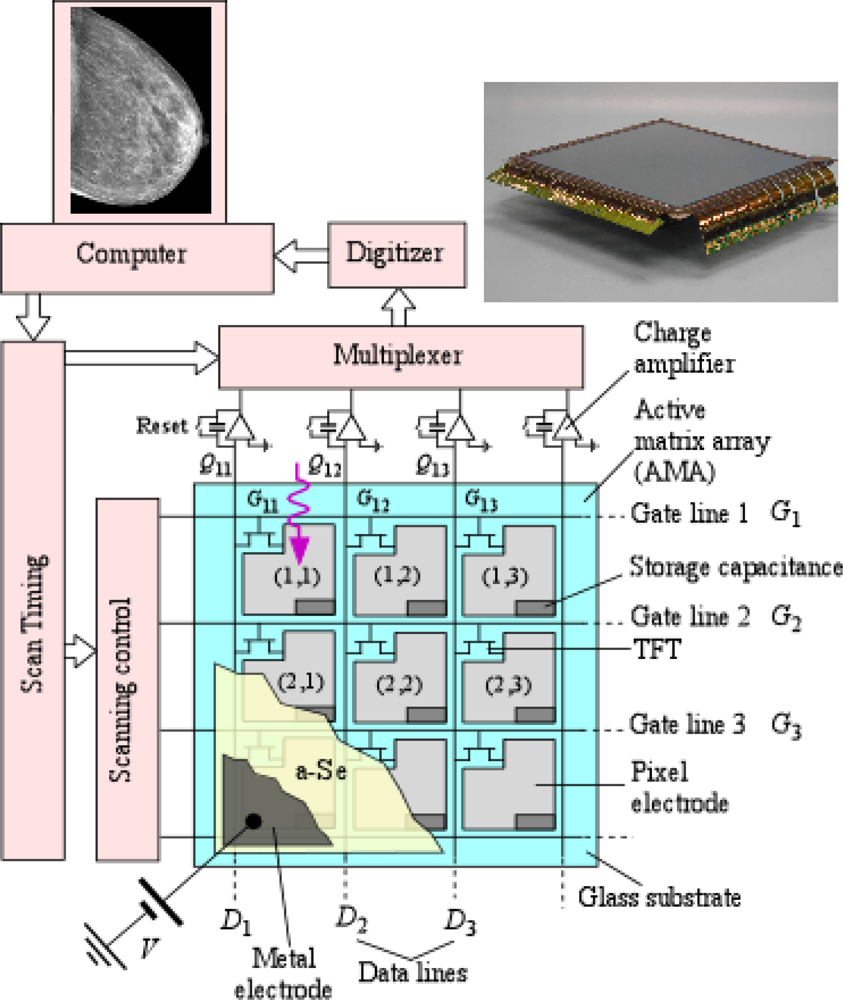