Net ecosystem exchange (NEE) of carbon dioxide (CO2) was measured in a cool temperate peatland in northwestern Turkey on a continuous basis using eddy covariance (EC) sensors and multiple (non-)linear regression-M(N)LR-models. Our results showed that hourly NEE varied between −1.26 and 1.06 mg CO2 m−2 s−1, with a mean value of 0.11 mg CO2 m−2 s−1. Nighttime ecosystem respiration (RE) was on average measured as 0.23 ± 0.09 mg CO2 m−2 s−1. Two best-fit M(N)LR models estimated daytime RE as 0.64 ± 0.31 and 0.24 ± 0.05 mg CO2 m−2 s−1. Total RE as the sum of nighttime and daytime RE ranged from 0.47 to 0.87 mg CO2 m−2 s−1, thus yielding estimates of gross primary productivity (GPP) at −0.35 ± 0.18 and −0.74 ± 0.43 mg CO2 m−2 s−1. Use of EC sensors and M(N)LR models is one of the most direct ways to quantify turbulent CO2 exchanges among the soil, vegetation and atmosphere within the atmospheric boundary layer, as well as source and sink behaviors of ecosystems.
Keywords: carbon cycle; flux tower; biogeochemical model; diurnal variation carbon cycle; flux tower; biogeochemical model; diurnal variation

Though spatially small (5% of the terrestrial biosphere) compared with most other ecosystems [1,2], peatlands play a significant role in carbon (C) and water metabolism of the World. Understanding and quantifying C dynamics of peatlands are crucial to prediction of responses to global climate change and rehabilitation of peatlands under the increasing magnitude and rate of human-induced disturbances. Eddy Covariance (EC) sensors are one of the most direct ways to measure and estimate turbulent carbon dioxide (CO2), water vapor and energy fluxes exchanged among soil, vegetation, and atmosphere within the atmospheric boundary layer. The use of the EC method and sensors on a long-term and continuous basis across the World has led to the establishment of an integrated global network for standardization of flux tower activities (called FLUXNET) and a network for standardization and development of spectral sensors toward bridging the gap between remote and proximal sensing (called SpecNET).

Our study area in Turkey, the Yenicaga peatland area that at one time occupied 240 km2, has diminished to less than 30 km2 due to drainage, cultivation, afforestation, and peat mining [3,4]. There is a lack of information about C metabolism of peatland ecosystems in Turkey, and this study is the first to comprehensively determine C dynamics and components in one of the remaining major peatlands. The objective of this study was to quantify the rate, magnitude, and timing of CO2 exchange between the atmosphere and Yenicaga peatland using the EC sensors and multiple (non-)linear regression-M(N)LR-models.

An EC flux tower site was installed about 1 km north of Lake Yenicaga (18 km2) at the elevation of 988 m above seal level on July 12, 2010. The climate in the Yenicaga region is classified as cool temperate, with a mean annual temperature and precipitation of 10.2 °C and 538 mm, respectively [5]. The Yenicaga peatland is reported to contain Devonian and cretaceous limestone, basaltic tuff, lava, and olistolites, with the uppermost layer consisting of tertiary and quaternary formations [5]. The natural vegetation types of the Yenicaga peatland consist of the following dominant communities: (1) Phragmites australis and Typha domingensis (41.2 ha); and (2) Ranunculus lingua, Acorus calamus, Najas marina, Pedicularis palustris, Senecio paludosus (107.8 ha) [6]. The mean vegetation height around the flux tower is about 0.5 m, and the terrain observed around the flux tower exhibits flat and uniform grasslands.

As with the conventional meteorological sign notation, downward and upward fluxes are considered negative (−) and positive (±), respectively. The first step of data processing involved the removal of erroneous spikes and their associated CO2 fluxes when latent heat flux (LEwpl) < −100 or > 800 W m−2; sensible heat flux (Hs) < −150 or > 500 W m−2; and precipitation events occurred [10]. For both hourly daytime and nighttime CO2 fluxes, descriptive statistics were given, and best-fit cumulative distribution function (CDF) was selected. Tukey’s multiple comparison was performed after one-way analysis of variance (ANOVA) for the entire dataset in order to test significant differences in hourly, nighttime versus daytime and monthly means. All the statistical analyses were performed with Minitab 15.1 (Minitab Inc. 2006).

Second, EC data were separated into daytime (Rn and/or Rs_dn > 10 W m−2) and nighttime (Rn and/or Rs_dn ≤ 10 W m−2) periods since EC data are more reliable during daytime hours than during nighttime hours, and nighttime EC data ( ) can be used to estimate daytime as well as nighttime ecosystem respiration (both plant and soil respiration) ( ). Negative night CO2 flux data were deleted as no gross primary productivity (GPP = 0) occurs during the nighttime. The site-specific threshold value of friction velocity (u*) was determined as 0.03 m s−1 below which low vertical wind velocity led to underestimation of the nighttime CO2 fluxes [11]. Likewise, nighttime periods where horizontal wind velocity was less than 1 m s−1 were removed from the dataset. Finally, night fluxes where CO2 density data had the standard deviation of > 14 mg m−3 (0.6 μmole m−3) were eliminated from further analyses [12]. Multiple (non-)linear regression models were fitted to the resultant night CO2 dataset, and best-fit M(N)LR models with and without the inclusion of temporal variables (hour, and month) were chosen using best subsets procedure (low Mallows’ Cp, high adjusted R2, and low SE). The following soil respiration equations of RothC [13] and CENTURY [14] models were also used to model daytime RE:

Hourly GPP values were estimated as the sum of NEE and daytime RE. Daytime RE was obtained extrapolating nighttime RE fluxes to the remaining daytime fluxes, based on M(N)LR models.

Descriptive statistics of despiked and averaged EC data for the period of July 12 to October 17, 2010 indicated that mean hourly CO2 fluxes above the canopy had a larger temporal variability (CV = 498) than the rest of the measured variables and varied between −1.5 and 1.5 mg m−2 s−1 (Table 1). During the study period, the study site cumulatively received 92 mm PPT and lost 305 mm water vapor via ET. The mean Bowen ratio of Hs:LEwpl quantifying the evaporative demand of an environment was estimated at 0.37, thus characterizing the Yenicaga peatland as a mesic environment. A logistic CDF with a location of 0.05197 and a scale of 0.1596 appeared to fit our daytime and nighttime Fc_wpl data fairly well as follows (r = 0.99; n = 1884; P < 0.001) (Figure 2):

where μ and s are location and scale parameters of the logistic CDF, respectively. The fitted logistic CDF can be used to estimate percentiles for the CO2 flux data (Figure 2).

Quartic functions (an equation of fourth degree) fitted to both entire and monthly Fc_wpl datasets as a function of the explanatory temporal variable (h) provided a meaningful representation of CO2 fluxes, with a R2adj value range of 70.9% in July to 31.3% in October (Figures 3 to 7).

where the variable “daytime” was used as an indicator variable coded as 1 and 0 for daytime and nighttime, respectively, and the sign “*” between the variable notations denotes two-to-four-way interactions.

where Tsonic is sonic temperature (°C), Uz is vertical wind speed (m s−1), and Pa is air pressure (kPa). Nighttime RE Equations (6) and (11) were used to estimate daytime RE values which in turn led to the estimation of −GPP component from Equation (3) as can be seen in Figures 8 and 9.

Carbon metabolism components of the Yenicaga peatland as measured by EC sensors and quantified by M(N)LR models clearly revealed that diurnal and seasonal variations in exchange rates of CO2 between the atmosphere and the peatland ecosystem are dependent on the magnitude, rate and timing of GPP and total RE, which are in turn strongly controlled by the dynamics of soil moisture and temperature, and PAR. Peatlands experiencing drought conditions are reported to be able to act as a CO2 source. Given the total PPT: ET ratio of 0.3 during the study period, the Yenicaga peatland is considered to undergo a dry season and signals what future rate and amount of changes may be expected in the face of an increase in ET, air temperature and ecosystem disturbances as well as a decrease in PPT. The present study is the first one to quantify CO2 exchanges for a peatland in Turkey using real-time monitoring by the EC sensors. It is also the first time in Turkey that diurnal source and sink behaviors of a rarely occurring ecosystem like the Yenicaga peatland, which at the same time undergoes severe human-induced pressures such as conversions to rangeland and cropland, and peat mining, were quantitatively assessed using EC sensors. Further research is needed to explore an integration of remote and proximal sensors, and biogeochemical process-based models in improving our understanding and predicting impacts of human-induced disturbances on ecosystem metabolism.

We would like to thank TUBITAK and COST Action ES0903 for funding our project (CAYDAG109Y186). We are grateful to Mr. Aydın Gülmez and Staff of Yenicaga Municipality for their logistic support during our field studies. We acknowledge the financial and administrative contributions of Scientific Research Project offices of Abant Izzet Baysal and Akdeniz Universities for the project. 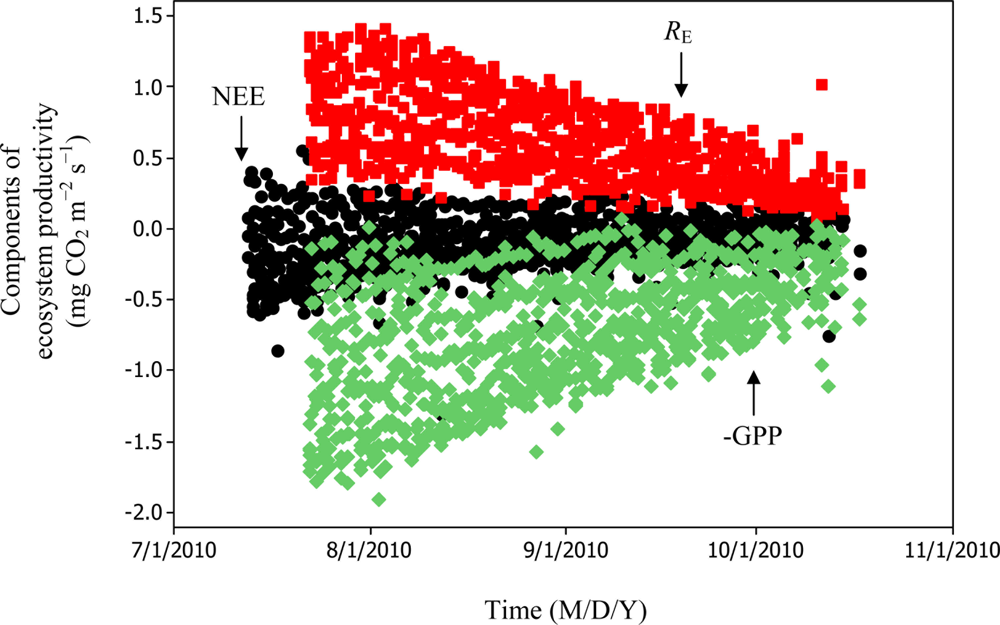 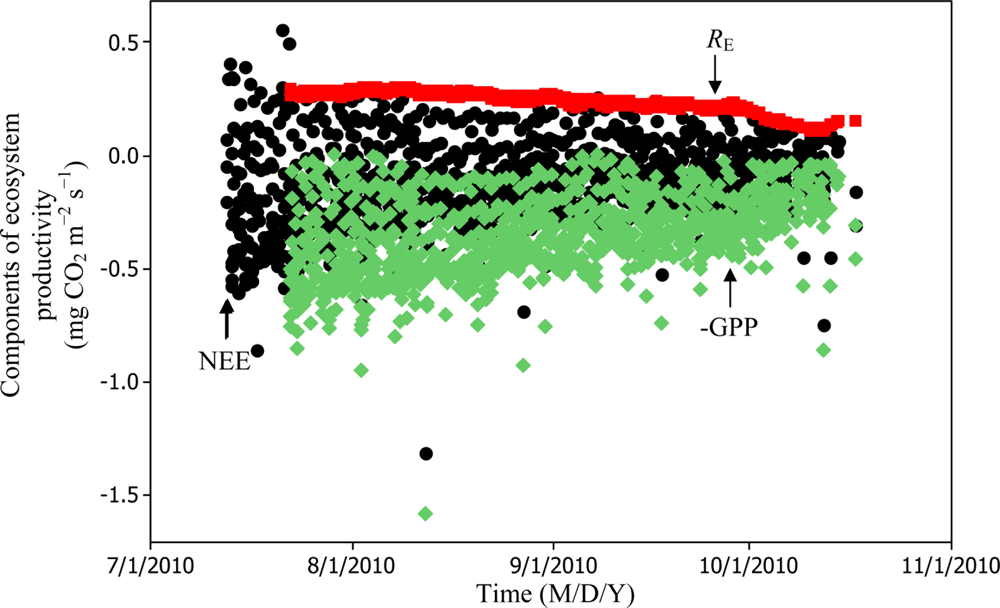 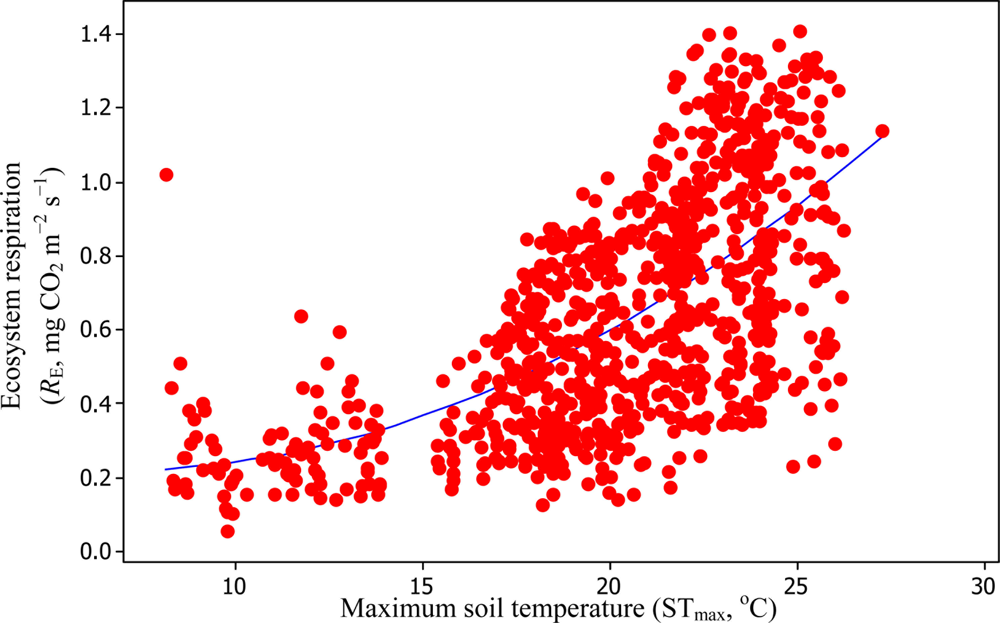 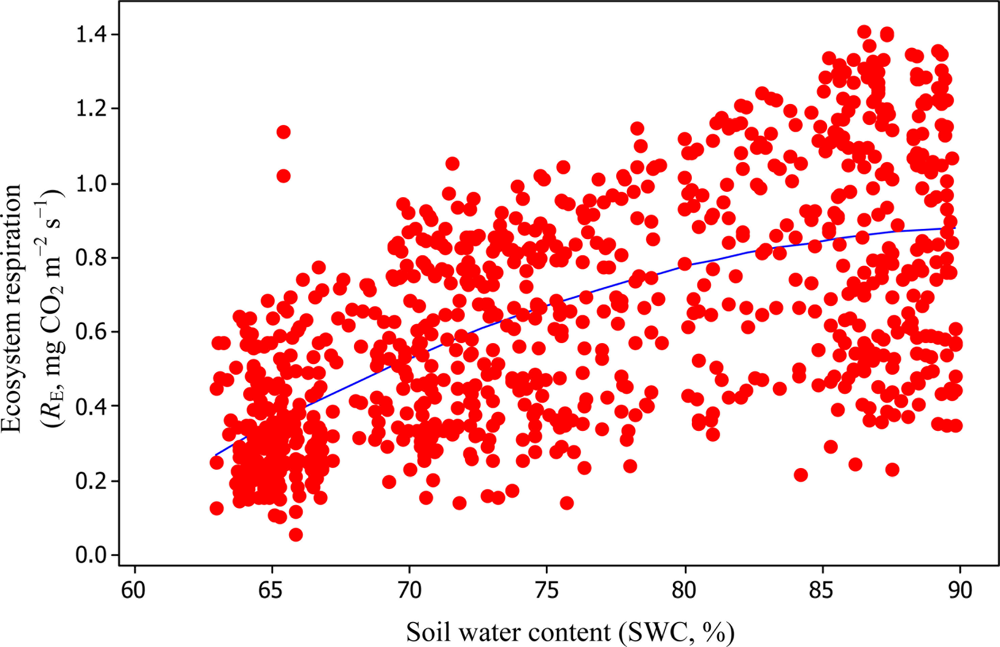 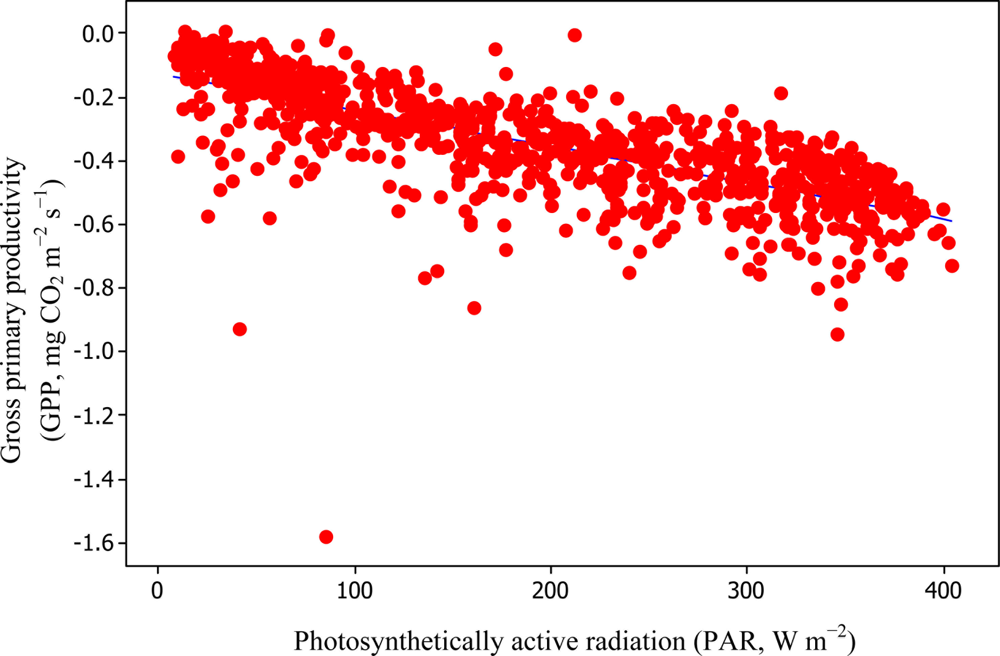 Table 1. Descriptive statistics of eddy covariance and meteorological data collected on an hourly basis in the Yenicaga peatland.