Myocardial Motion Analysis for Determination of Tei-Index of Human Heart

The Use of Wearable Inertial Motion Sensors in Human Lower Limb Biomechanics Studies: A Systematic Review

Accelerometers have been adopted in human joint kinematics studies since 1990s. Willemsen [3] and Heyn [4] applied uniaxial accelerometers on aluminum strips, which were then attached on the foot, shank, thigh and pelvis of subjects by Velcro straps. In their studies, four accelerometers on rigid metal plates were needed on each segment, otherwise they would have had to numerically integrate twice the angular acceleration of the segment to get the joint angle [5]. Therefore a total of eight accelerometers were needed to estimate joint kinematics. Only uniaxial joint kinematics could be obtained. Also, in both studies, leg segments were assumed to be rigid bodies, and the joints were single axis hinge joint. These simplified joint models were good for simple motion analysis, for example two dimensional single joint motion analysis.

Simplified systems were developed in 2000s. Data from accelerometers and gyroscope could be used to estimate orientation relative to an inertial frame [1]. Although relative orientation could be estimated by integration of data from gyroscope, errors would accumulate by this method, which caused distortion and drift errors. Accelerometer can be used to compensate the drift of the gyroscope about the axes of the horizontal plane, while magnetic sensor which located orientation by earth’s magnetic field was adopted to solve this drift problem about the vertical axis [6]. However, inside reinforced-concrete-covered buildings, the magnetic field on the earth was always perturbated. Further development of high accuracy three dimensional relative orientations was developed by Favre and his colleagues [7]. Favre and his colleagues integrated angular velocity data obtained from gyroscopes, and then corrected the angle estimation based on inclination data from accelerometers gathered during rest or constant velocity motion period. Known joint anatomical constraints were also considered for better estimation in a later study [8]. Static calibration in a defined position was still needed. Cooper [1] and his colleagues extended the measurements in dynamic activities. However, Cooper’s studies only involved a simplified model of a single hinge knee joint, further extension of the technique was needed for three dimensional measurements.

The research method was graphically displayed in Figure 1 for better understanding of the procedure. Systematic literature search of Medline (from 1966), ISI Web of Knowledge (Science Citation Index Expanded, from 1985; Social Sciences Citation Index, from 1956; Arts & Humanities Citation Index, from 1975), SportDiscus (from 1975) and IEEE Xplore was conducted at the last week of July in year 2010. The four databases were chosen as they were popular search engines which cover most of the literature in engineering, medicine and sports biomechanics field. The searched keyword string was “(biomechanics OR injury prevention OR kinematics) AND (lower limb OR knee OR hip OR ankle) AND (inertial sensor OR accelerometer OR gyroscope OR gyrometer OR magnetic sensor OR magnetrometer)” appeared in title, abstract, and keyword fields. The initial total number of identified articles from these databases was 195. Fifty four duplicated entries were moved, therefore 141 articles were left. Three articles not written in English were excluded, the number of articles were further reduced to 138. These 138 full papers were obtained from the library in The Chinese University of Hong Kong as well as from online search. The title and abstract of each entry was read, non-related studies were excluded, 36 full papers and conference abstract were left. Three more papers in related topic were added manually [9–11], therefore, a total of 39 full papers and conference abstract were included in this review. Inclusion criteria were as follow: (1) The study reported lower limb joint kinematics; and (2) The study involves accelerometers, gyroscopes and/or magnetic sensors. However, articles only contain the following content were excluded: (1) In vivo and in vitro kinematics studies; (2) Joint kinematics data not obtained from accelerometers, gyroscopes or magnetic sensors and (3) Frequency analysis.

In most of the reviewed papers, collected data was not processed in a real time basis. Some of the systems have its own data logging system attached on the subject’s body. Portable data loggers with different types of memory cards, for example, flash memories and SD-micro cards [1,8,16,20,25,27,31] were one of the common methods for data logging. These memory cards allow handy data storage. There were also systems which required subjects to carry a hand held PC with them for data collection [34]. Hand held PC allows data collection in daily activities as they can be carried in pocket easily. However, their sizes were still not small enough for subjects performing vigorous sport motions. Wired systems which data were collected by a wired notebook PC also existed [17,30]. Bluetooth wireless communication was also adopted [9,33], which allows subjects to have more freedom of motion during data collection. However, workstation must present for data collection, therefore it is not suitable for ambulatory system.

One of the disadvantages of application of wearable sensors in human motion analysis was that noise in data collection was usually severe. Therefore, data have to be filtered before further processing. Low pass filters with cut off frequencies ranged from 15–40 Hz were adopted in various systems [2,3,6,26,29]. The cut off frequencies were chosen carefully based on the motions being performed. Butterworth filters [17,26], Kalman filters [1,10,37] and Savitzky-Golay filters [18,19] were also adopted in some other systems according to their applications and motions to be detected (Table 2). Curved fitting technique was also adopted to eliminate noise [33].

The reviewed papers monitored the joint kinematics of ankles, knees and hips. Most of the studies simplified these joints as simple hinge joints, which assume only sagittal plane movement was allowed. However, some studies could provide detailed three dimensional descriptions for ankle, knee and hip joints. Tibial acceleration was other commonly recorded parameters for human motion analysis. Tibial acceleration can be easily obtained from accelerometer data, without complicated data processing, therefore was favorable for real time monitoring and classification of different human activities.

Fixation methods were a very important part in motion analysis using motion sensors. A good fixation method reduced the artifices of skin movement. Moreover, good fixation methods can greatly reduced the errors caused by improper alignment to anatomical axes. Velcro straps [3,30], double-side adhesive tape [39], elastic straps [2,29,18,28] and neroprene straps [11] were commonly used for fixing motion sensors on subjects’ bodies [3,15]. These tapes and straps are flexible and convenience to use. However, errors caused by skin movement can be significant. Some of the sensors were fixed on aluminum plate [4,15,29,31,39] or put inside plastic casing [6,25] first before attaching on subject’s bodies. Hard plate and casing can reduce relative skin movement and protect the sensors from damage. However, they are usually heavy and restrict subjects from normal movement. Semi-rigid belt [27] and exoskeleton [21] harness were also used for better sensor attachment, but are not convenience for long term ambulatory use. Another important note for fixation of sensor was that we have to ensure the axes of the inertial sensors aligned with the anatomical axes of the segments. Some studies applied anatomical calibration to align sensor’s axes with the axes of the body segment. Calibration devices were adopted in static trial to identify the lines connecting anatomical landmarks [32]. Static postures were also adopted to calibrate the sensors in a functional approach [9].

Some limitations still exist for lower limb human biomechanics analysis by wearable inertial motion sensors. Firstly, filtering, integration, trigonometry were involved to estimate joint angular kinematics. Therefore, high demand of hardware was needed for data processing, this made a higher cost and larger size for the data processing unit. Most importantly, complicated data processing technique means real time analysis nearly impossible in most of the studies. In some other studies, real time analysis was possible, for example Cutti [9] and his colleagues can measure real time joint kinematics, however, it was still limited to data collection in clinical setting.

Future development of joint kinematics analysis techniques for wearable inertial sensors should focus simplification of data processing algorithm would be the most challenging part. Batteries lives, fixation method, size of central processing unit were other aspects to be improved. Inertial sensors might replace video cameras and optical motion analysis systems in some human biomechanics studies as data collection could be done outside laboratory settings. The low cost of inertial sensors is obviously another advantage against optical motion analysis systems. Most importantly, it might be applied in ambulation system for real time motion classification, feedback to athletics about sports performance, monitor patients’ daily activities and even act as alarm for activation of protective mechanism when the user was in danger of sports injury.

Wearable inertial motion sensors are highly transportable and no stationary units, such as receivers and cameras are needed in data collection, therefore can be used outside laboratory conditions [2]. Due to the development of micro-electro-mechanical systems (MEMS), the size and power consumption were greatly improved in the design of sensor, making it a good choice for lower limb joint kinematics studies. However, data logging, data processing and fixation method are the areas to be improved in the near future. Simplify data processing algorithm can allow reduction of size and cost of the data processing unit, which allows easy attachment on users for ambulatory purpose. Fixation method which allows freedom of movement and minimizes skin movement is another important aspect.

This research project was made possible by resources donated by The Hong Kong Jockey Club Charities Trust. 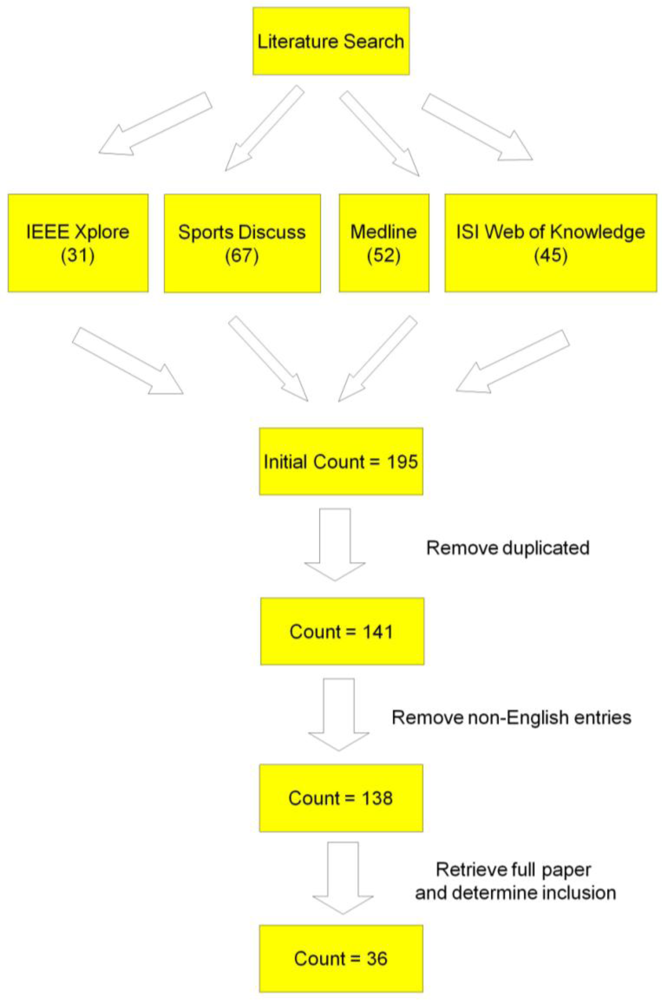 © 2010 by the authors; licensee MDPI, Basel, Switzerland. This article is an open access article distributed under the terms and conditions of the Creative Commons Attribution license ( http://creativecommons.org/licenses/by/3.0/).