Lobster Distribution and Biodiversity on the Continental Shelf of Brazil: A Review
Next Article in Special Issue

A New Shrimp Genus (Crustacea: Decapoda) from the Deep Atlantic and an Unusual Cleaning Mechanism of Pelagic Decapods
Previous Article in Journal

FloCan—A Revised Checklist for the Flora of the Canary Islands

In the harsh Antarctic terrestrial ecosystems, invertebrates are currently confined to sparse and restricted ice free areas, where they have survived on multi-million-year timescales in refugia. The limited dispersal abilities of these invertebrate species, their specific habitat requirements, and the presence of geographical barriers can drastically reduce gene flow between populations, resulting in high genetic differentiation. On continental Antarctica, mites are one of the most diverse invertebrate groups. Recently, two new species of the free living prostigmatid mite genus Stereotydeus Berlese, 1901 were discovered, bringing the number of Antarctic and sub-Antarctic species of this genus up to 15, of which 7 occur along the coast of Victoria Land and in the Transantarctic Mountains. To examine the biodiversity of Stereotydeus spp., the present study combines phylogenetic, morphological and population genetic data of specimens collected from nine localities in Victoria Land. Genetically distinct intraspecific groups are spatially isolated in northern Victoria Land, while, for other species, the genetic haplogroups more often occur sympatrically in southern Victoria Land. We provide a new distribution map for the Stereotydeus species of Victoria Land, which will assist future decisions in matters of the protection and conservation of the unique Antarctic terrestrial fauna. View Full-Text
Keywords: Victoria Land; molecular phylogeny; cox1; 28S; biogeography; terrestrial invertebrates; acari; Stereotydeus spp. Victoria Land; molecular phylogeny; cox1; 28S; biogeography; terrestrial invertebrates; acari; Stereotydeus spp.
►▼ Show Figures 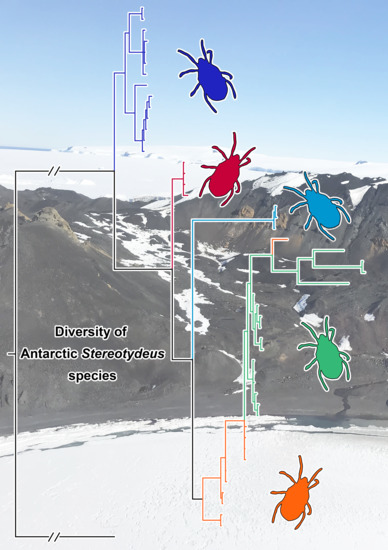