Exploring the Bacterial Communities of Infernaccio Waterfalls: A Phenotypic and Molecular Characterization of Acinetobacter and Pseudomonas Strains Living in a Red Epilithic Biofilm

Acquarossa river (Viterbo, Italy) was the site of a prospering Etruscan civilization thanks to metallurgical activity around 625–550 B.C. This caused the spread of heavy metals throughout the area. Rocks along the river probably act as a filter for these elements and they are covered by two different biofilms (epilithons). They differ for both color and bacterial composition. One is red and is enriched with Pseudomonas strains, while the other one is black and Acinetobacter is the most represented genus. Along the river lay the Infernaccio waterfalls, whose surrounding rocks are covered only by the red epilithon. The bacterial composition of this biofilm was analyzed through high throughput sequencing and compared to those ones of red and black epilithons of Acquarossa river. Moreover, cultivable bacteria were isolated and their phenotype (i.e., resistance against antibiotics and heavy metals) was studied. As previously observed in the case of Acquarossa river, characterization of bacterial composition of the Infernaccio red epilithon revealed that the two most represented genera were Acinetobacter and Pseudomonas. Nonetheless, these strains differed from those isolated from Acquarossa, as revealed by RAPD analysis. This work, besides increasing knowledge about the ecological properties of this site, allowed to isolate new bacterial strains, which could potentially be exploited for biotechnological applications, because of their resistance against environmental pollutants. View Full-Text
Keywords: Infernaccio; Acquarossa; biofilm; epilithons; heavy metals; pollutants Infernaccio; Acquarossa; biofilm; epilithons; heavy metals; pollutants
►▼ Show Figures 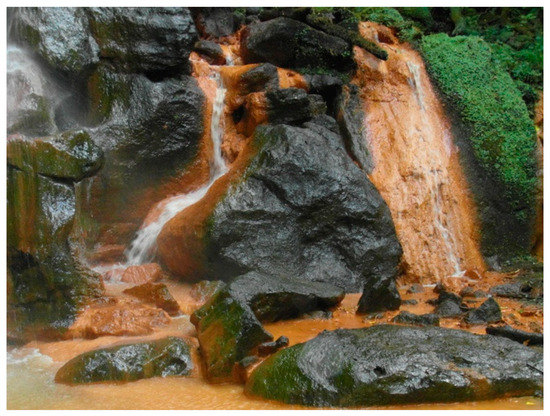