The pyridazinone ring is part of many clinically used drugs of different therapeutic categories, including emorfazone (Figure 1), which is used as an analgesic/anti-inflammatory drug [1]. This ring is also considered as a pharmacophore to develop bioactive molecules [2]. The increased level of cyclooxygenase-2 (COX-2) is liable for the generation of the inflammatory procedures in a cell [3] and is considered as an important therapeutic target to develop anti-inflammatory drugs. Recent studies have revealed that pyridazinone derivatives are promising templates for evolving COX-2 inhibitors [4].
The titled compound has been disclosed generically as compound 1b in the literature [5]. As per the exact structure search of the Sci-Finder, its CAS registry number is 1532529-93-3. The chemical structure lookup service (CSLS) (https://cactus.nci.nih.gov/) provided zero hits for the titled compound. In [5] the author is explicitly silent about the synthesis, spectral analysis, in silico studies, and the COX-2 inhibitory profile of the titled compound. Accordingly, the author reports these aspects of the titled compound (after this compound 2) in this communication.

A comparative molecular docking study between compound 2 and selected NSAIDs was performed. Aspirin, diclofenac, indomethacin, naproxen, oxaprozin, and piroxicam are non-specific COX-2 inhibitors, whereas celecoxib is a specific COX-2 inhibitor. The results of the docking study are disclosed in Table 1. Compound 2 had better binding energy (docking score) than aspirin, diclofenac, indomethacin, naproxen, and piroxicam (Figure 2). The calculated values of the inhibition constant (Ki) for compound 2 was less than aspirin, diclofenac, indomethacin, and naproxen. Accordingly, it can be assumed that compound 2 has more potent COX-2 inhibition than aspirin, diclofenac, indomethacin, and naproxen. The other quality parameters (RMSD, LE, LELP, LEscale, and FQ) [7,8] were also comparable to the selected NSAIDs. The COX-2 is a therapeutic target, whereas COX-1 inhibition causes gastric ulceration effects [9]. Accordingly, the molecular docking study against COX-1 was also carried out. The results of COX-1 docking indicate that compound 2 had a lesser binding affinity for COX-1 than celecoxib, indomethacin, and oxazoprozin. It can be analyzed from Table 1 data that compound 2 had a better potency for COX-2 and lesser potency for COX-1 in comparison to indomethacin. Accordingly, it can be assumed that compound 2 can display better anti-inflammatory activity results than indomethacin. Figure 3, Figure 4 and Figure 5 represent the 2D interactions of celecoxib, indomethacin, and compound 2 with the COX-2 protein, respectively. Figure 3 depicts the interaction of the celecoxib with the COX-2 protein, wherein the sulfonamide moiety interacts with the Arg 513 residue of the protein. This is in concurrence with the literature [10]. This observation supports our docking results. The compound 2 and indomethacin do not show interaction with Arg 513 residue (Figure 4 and Figure 5), which may be a reason for their less selectivity for COX-2 in contrast to celecoxib.

The Molecular Operating Environment (MOE) 2019.0102 (Chemical Computing Group Inc., Canada) was employed for the docking study of compound 2 in comparison to the selected non-steroidal anti-inflammatory drugs (NSAIDs). The COX-2 protein (PDB ID: 5KIR), and COX-1 protein (PDB IDs: 3KK6) were downloaded from the PDB database (https://www.rcsb.org/) [10,16]. The chain B of these proteins was selected for the docking purpose. The water molecules were removed from the selected protein chains, and the proteins were prepared for docking using the Quickprep functionality (default setting). The ligand structures were prepared on the MOE program using MOE builder. The partial charges were removed from the structures, and the energy was minimized. The mdb files of the ligands were stored as a library. The docking of the ligand with the selected proteins was performed with the default docking setting of the MOE-2019.0102. However, the number of poses was changed to 10 instead of 30. The docking scores (DS) and the root mean square deviation (RMSD) values were noted after the docking. The following parameters were calculated based on the DS of compounds [7,8].

3.4. Determination of the Physicochemical Properties and Drug-Likeness

Analysis was performed by the Swiss web server (http://www.swissadme.ch/) [13]. The list of Simplified Molecular Input Line Entry System (SMILES) of compound 2, and selected Non-steroidal anti-inflammatory drugs (NSAIDs) were entered in the database, and the run button was pressed to get results. The obtained physicochemical parameters are listed in Table 2. The bioavailability radar (Supplementary Figure S1-1–S1-5) and the BOILED-Egg model for the pharmacokinetic parameters (Supplementary Figure S2) were also noted and analyzed.

Analysis was performed by employing the identical methodology disclosed in our previous publication [9]. The IC50 values were determined using regression analysis. The selectivity index (SI = COX-1 (IC50 in nM)/COX-2 (IC50 in nM)) was also calculated. The data of this analysis are provided in Table 3.

The compound 2 is a novel potent COX-2 inhibitor in comparison to indomethacin. It is also expected to possess lesser ulcerogenic side effects than indomethacin because of its lower potency towards COX-1 inhibition. This compound also encompasses comparable promising physicochemical and pharmacokinetic profiles concerning other NSAIDs, including indomethacin. However, further toxicity investigations are needed to ensure the lead likeness of compound 2.

The author thanks Northern Border University for providing facilities to carry out this work. 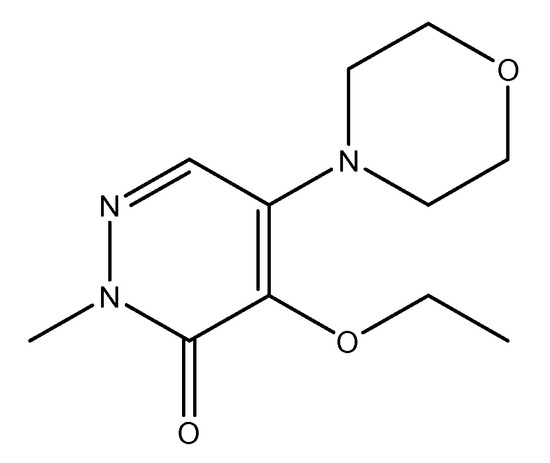 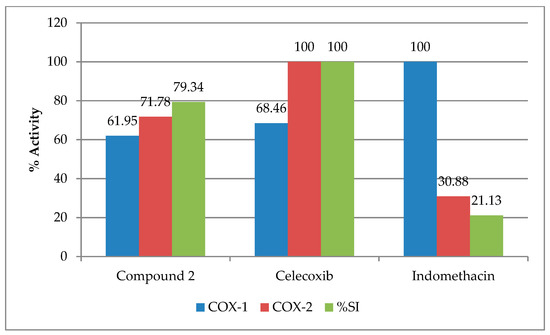