The partition coefficient (P) of a compound has been shown over the years to be the single most important property controlling the transport in living organisms of xenobiotics such as drugs and environmental pollutants. Thousands of quantitative structure-activity relationships (QSARs) have been derived that utilise log P as a descriptor [1]. The 1-octanol-water system is generally used for the measurement or calculation of log P, although many other solvent pairs have also been used, especially the cyclohexane-water system. P is an equilibrium constant, and thus, from the van’t Hoff isotherm, is a free energy term:
ΔG = 2.303 log P
where ΔG is the Gibbs free energy of transfer from water to pinguid solvent. However, it should be remembered that the Gibbs free energy is the difference between the enthalpy (ΔH) and the entropy (ΔS) of transfer:
ΔG = ΔH - TΔS
where T is the temperature (K). It is thus possible for two compounds with very similar log P values to have widely differing enthalpies and entropies of partitioning, indicating different partitioning mechanisms. Indeed, it is sometimes said that the log P term hides more than it reveals, at least so far as partitioning mechanisms are concerned. Because of this it is important, in considering partitioning mechanisms, to examine not only the free energy of partitioning but also the enthalpy and entropy of partitioning.
In an investigation of the effects of hydrogen bonding and steric effects on partitioning behaviour, we have determined the thermodynamics of partitioning of 45 compounds, comprising 34 phenols, 5 benzoic acids and 6 acetanilides, in both the water-octanol and the water-cyclohexane systems. We have used the van’t Hoff approach, which involves measuring the partition coefficient of a chemical at a number of different temperatures, and obtaining from the van’t Hoff isochore (eq. 3) the enthalpy of partitioning.
Log P = - 2.303 ΔH/RT + constant
The method relies on the enthalpy of partitioning being constant over the temperature range used, which may not be the case when there is considerable mutual solubility of the two solvents [2], as in the case of octanol and water (Water-saturated octanol contains about 27 mole % water at 25oC).

The Gibbs free energy, enthalpy and entropy of partitioning of each of the 45 chemicals in the water-octanol and water-cyclohexane systems are given in Table 1. All of the van’t Hoff plots of log P vs. 1/T for water-cyclohexane, and most of those for water-octanol, were rectilinear. For six compounds with non-rectilinear plots (see Experimental), tangents were taken at 25oC. It is accepted that for these compounds the thermodynamic parameters probably contain greater error. We believe, however, that the consistency of the results means that they are reasonably accurate. Figure 1 depicts van’t Hoff plots for nine of the chemicals, including some with non-rectilinear plots.

Table 1. Thermodynamic parameters (mole fraction scale) of partitioning from water to octanol (w→o) and from water to cyclohexane (w→c)
a Units are kJ mol-1b Units are J mol-1 K-1c Compound too insoluble in cyclohexane for log P to be measured
It has been postulated [3] that ΔH and ΔS should be rectilinearly correlated for a system or process operating by a single mechanism, although it has been pointed out [4] that since ΔH and ΔS are derived from the same set of data, such enthalpy-entropy compensation could be a statistical artefact. The use of ΔG-ΔH is preferred [2] for this reason. In fact, for our data, there is good enthalpy-entropy correlation in the water-octanol system (n = 45, r2 = 0.852) but not in the water-cyclohexane system (n = 42, r2 = 0.529. There is virtually no ΔG-ΔH correlation in either system; however, when sub-sets of compounds are examined separately, there are good ΔG-ΔH correlations in both systems. For example, for the four methyl-2-nitrophenols in the water-octanol system the coefficient of variation (r2) is 0.865. We interpret this to mean that our data are valid, and that there are multiple mechanisms of partitioning within our data-set, with distinctions being made even between, for example, methylphenols and dimethylphenols. 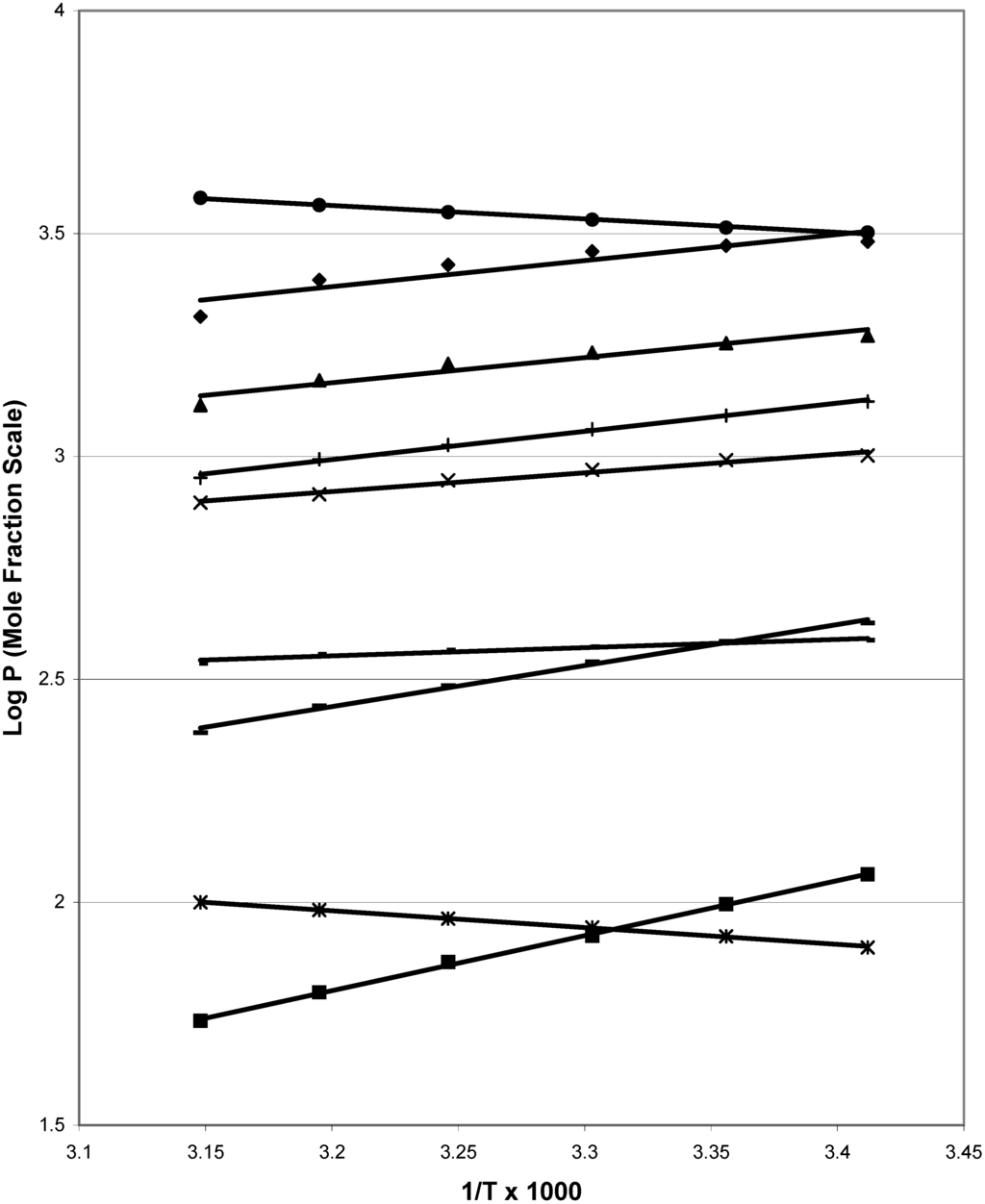 Analysis of the thermodynamics of partitioning between water and octanol and between water and cyclohexane has shown that the existence of intramolecular hydrogen bonding in compounds such as 2-nitrophenol, 2-hydroxybenzaldehyde and salicylic acid can be clearly detected. However, in 2-nitro-resorcinol and 2,6-dihydroxybenzoic acid a second intramolecular hydrogen bond does not appear to be formed in polar solvents. Our results also show that no intramolecular hydrogen bond exists in 2‑chlorophenol in polar solvents, although it appears to exist in cyclohexane solution.
Steric effects such as shielding of polar groups and twisting of conjugated groups out of the plane of the aromatic ring can be seen from the thermodynamics of partitioning of compounds such as 2,6‑dimethylphenol, 2,6-dimethylbenzoic acid and 2-methylacetanilide.

Compounds were obtained from a variety of commercial sources, and were purified by crystallisation or distillation. Cyclohexane and 1-octanol were of spectroscopic grade quality. Partition coefficients in the octanol-water and cyclohexane-water systems were measured over the temperature range 20-45oC using the filter-probe method modified by Kinkel et al. [2] from the original method developed by Cantwell and Mohammed [19]. It comprised a thermostatted mixing chamber whose contents could be vigorously stirred using a magnetic stirring bar; the output from the chamber was passed through either a hydrophilic (Whatman No. 1) or a hydrophobic (Whatman PS) filter paper, and the filtered solution passed into a thermostatted Perkin Elmer 550 ultraviolet absorption spectrophotometer and then returned to the mixing chamber. A full description of the apparatus is given in Kinkel et al. [2]. Solvents were pre-equilibrated for 24 hours in order to achieve mutual saturation. All spectrophotometric calibration plots were rectilinear over the concentration ranges used, and all determinations were carried out in duplicate.
Partition coefficients were obtained at six temperatures from 20 to 45oC, and were calculated on a mole fraction basis and converted to ΔG values using eq. 1. ΔH values were obtained from the slope of the log P-1/T plots, and ΔS values were obtained from eq. 2. Most of the log P-1/T plots were rectilinear, including all those for the cyclohexane-water system. A few showed a slight convex curvature in the octanol-water system, and for those compounds the slope was taken as the tangent at 25oC. The compounds with non-rectilinear plots were 3-chlorophenol, 4-chlorophenol, 2,3,5-trimethyl-phenol, 2,3,6-trimethylphenol, 2,4,6-trimethylphenol and 3,5-dimethylacetanilide.

© 2005 by MDPI (http://www.mdpi.org). Reproduction is permitted for noncommercial purposes.