In Sickness and in Health: Erythrocyte Responses to Stress and Aging

The presence of liver cancer stem cells (LCSCs) is one of the reasons for the treatment failure of hepatocellular carcinoma (HCC). For LCSCs, one of their prominent features is metabolism plasticity, which depends on transporters and ion channels to exchange metabolites and ions. The K+ channel protein KCNN4 (Potassium Calcium-Activated Channel Subfamily N Member 4) has been reported to promote cell metabolism and malignant progression of HCCs, but its influence on LCSC stemness has remained unclear. Here, we demonstrated that KCNN4 was highly expressed in L-CSCs by RT-PCR and Western blot. Then, we illustrated that KCNN4 promoted the stemness of HC-C cells by CD133+CD44+ LCSC subpopulation ratio analysis, in vitro stemness transcription factor detection, and sphere formation assay, as well as in vivo orthotopic liver tumor formation and limiting dilution tumorigenesis assays. We also showed that KCNN4 enhanced the glucose metabolism in LCSCs by metabolic enzyme detections and seahorse analysis, and the KCNN4-promoted increase in LCSC ratios was abolished by glycolysis inhibitor 2-DG or OXPHOS inhibitor oligomycin. Collectively, our results suggested that KCNN4 promoted LCSC stemness via enhancing glucose metabolism, and that KCNN4 would be a potential molecular target for eliminating LCSCs in HCC. View Full-Text
Keywords: LCSCs; KCNN4; metabolism plasticity; glycolysis; OXPHOS LCSCs; KCNN4; metabolism plasticity; glycolysis; OXPHOS
►▼ Show Figures 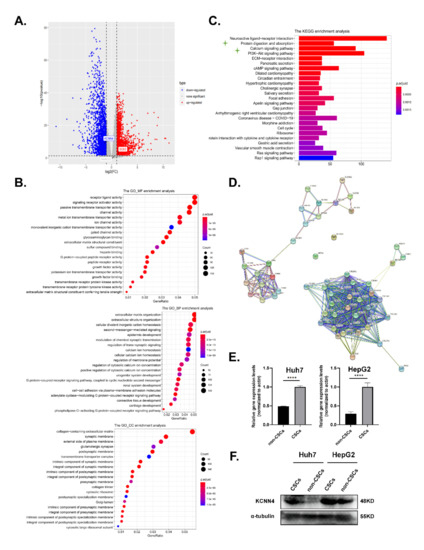