Role of the Ribonuclease ONCONASE in miRNA Biogenesis and tRNA Processing: Focus on Cancer and Viral Infections
Next Article in Special Issue

Multiple-system trophy (MSA) and Parkinson’s Disease (PD) are both progressive, neurodegenerative diseases characterized by neuropathological deposition of aggregated alpha-synuclein (αSyn). The causes behind this aggregation are still unknown. We have reported aberrancies in MSA and PD patients in naturally occurring autoantibodies (nAbs) against αSyn (anti-αSyn-nAbs), which are important partakers in anti-aggregatory processes, immune-mediated clearance, and anti-inflammatory functions. To elaborate further on the timeline of autoimmune aberrancies towards αSyn, we investigated here the Immunoglobulin (Ig) affinity profile and subclass composition (IgG-total, IgG1-4 and IgM) of anti-αSyn-nAbs in serum samples from prodromal (p) phases of MSA and PD. Using an electrochemiluminescence competition immunoassay, we confirmed that the repertoire of high-affinity anti-αSyn-nAbs is significantly reduced in pMSA and pPD. Further, we demonstrated that pPD had increased anti-αSyn IgG-total levels compared to pMSA and controls, concordant with increased anti-αSyn IgG1 levels in pPD. Anti-αSyn IgG2 and IgG4 levels were reduced in pMSA and pPD compared with controls, whereas anti-αSyn IgG3 levels were reduced in pMSA compared to pPD and controls. The results indicate that the impaired reactivity towards αSyn occurs prior to disease onset. The apparent lack of high-affinity anti-αSyn nAbs may result in reduced clearance of αSyn, leading to aggregation of the protein. Thus, this study provides novel insights into possible causes behind the pathogenesis in synucleinopathies such as MSA and PD.
Keywords: multiple system atrophy; Parkinson’s disease; naturally occurring autoantibodies (nAbs); alpha-synuclein; prodromal multiple system atrophy; Parkinson’s disease; naturally occurring autoantibodies (nAbs); alpha-synuclein; prodromal

The multiple-system atrophy (MSA) and Parkinson’s disease (PD) are both progressive, neurodegenerative disorders characterized by abnormal misfolding and depositions of alpha-synuclein (αSyn) into neurons in PD, and into oligodendrocytes in MSA [1,2]. For this reason, they are defined as synucleinopathies, a group of diseases characterized by pathological αSyn aggregates in brain and peripheral neuronal cells, which also include dementia with Lewy bodies (DLB) and the rarer pure autonomic failure (PAF) [3]. There is accumulating evidence indicating that αSyn deposition not only occurs in the brain but to a high degree also in peripheral organs. This is shown by increased phosphorylation of αSyn at Serine-129 αSyn in skin samples [4,5], αSyn accumulation in the gut [6,7,8], as well as a generalized whole-body αSyn-seeding capability in MSA and PD [9,10,11]. Remarkably, αSyn can also be detected in different body fluids such as blood, cerebrospinal fluid, saliva, and as shown most recently in tears [12,13,14], which are body compartments accessible to the immune system. Synucleinopathies can thereby be considered multisystem disorders, substantiating the hypothesis that the αSyn pathology spreading from peripheral organs to the brain may be a critical feature at the prodromal phases before the classical, motor systems get manifested.
Naturally occurring autoantibodies (nAbs), mainly immunoglobulin (Ig) G and IgM isotypes, comprise an important part of the Ig repertoire from the innate immune system. nAbs have protective roles in maintaining protein homeostasis via a T-cell-independent manner [15,16]. As shown in pre-clinical models, anti-αSyn nAbs isolated from intravenous Ig (IVIg) confer protective properties [17], presenting highly diverse binding profiles to monomeric, oligomeric, and fibrillary structures of αSyn [17]. Furthermore, specific nAbs produced from single αSyn clonotypes from healthy individuals also display protective effects [18]. In humans, we and others have evaluated the IgG repertoire of αSyn reactive nAbs in PD and MSA [19,20,21,22], showing specifically in PD a tendency to increased total IgG anti-αSyn nAbs levels, particular in early disease as also reviewed by Scott et al. 2018 [22]. The complexity in αSyn autoimmunity further expands, since the total IgG anti-αSyn nAbs compartment consists of four subclasses, IgG1–4, each of which have different biological functions [23]. We have previously found several aberrancies in the four IgG subclasses and IgM, both in plasma and CSF, which is suggestive of highly and perhaps changing immuno-αSyn interactions and responses. Most importantly, when looking at the nAbs affinity, we found a decline in the high-affinity repertoire of anti-αSyn nAbs in PD and MSA patients, as shown both for plasma [24] and CSF [21]. The progressive nature of synucleinopathies and previous reports of phenoconversion from prodromal syndromes such as idiopathic REM-sleep behavior disorder (iRBD) [25] to synucleinopathic disorders serve as evidence that pathological events occur years prior to symptoms onset. It is our belief that this αSyn-specific immune decline may have a pathological effect on αSyn homeostasis and impair the clearance of αSyn toxic species and for that reason, we hypothesize that the reduction of high-affinity anti-αSyn-nAbs occurs years prior to disease onset. The aim of this study was therefore to evaluate high-affinity anti-αSyn nAbs in serum samples taken from PD and MSA patients up to 12 years before diagnosis. A reduction of high-affinity anti-αSyn-nAbs in the prodromal phases advocates for immunization strategies already administrated according to prodromal symptoms/phases.

2.1. Affinity Measurement of Anti-αSyn nAbs in pMSA and pPD

To measure the relative affinity of anti-αSyn IgG nAbs in serum, we adapted our previously established competitive ELISA assay [21,24] to the ultrasensitive Meso Scale Discovery (MSD) platform. The anti-αSyn binding profiles were firstly assessed using randomly chosen serum pooled samples of 10 pMSA and 10 pPD patients, and 10 controls. We observed noticeable differences in the binding profiles between control, and pMSA and pPD patients (Figure 1A). The double sigmoid profile divides the anti-αSyn nAbs into two distinct subsets; the low-affinity anti-αSyn nAbs are revealed in the presence of high concentrations of αSyn monomers (25–200 nM), and the high-affinity nAbs are revealed in the presence of low concentrations of αSyn monomers (1–25 nM). Based on the competition curve profile, we selected four different concentrations of αSyn to measure the relative affinity of anti-αSyn nAbs (high-affinity profile: 2 nM and 12.5 nM αSyn; low-affinity profile: 50 nM and 200 nM αSyn) in the individual serum samples from 59 pMSA and 82 pPD patients, and 67 controls. The repertoires of high-affinity nAbs were significantly different at 12.5 nM (Figure 1B,E) and 2 nM (Figure 1B,F) between controls and pMSA (12.5 nM: p = 0.004, 2 nM: p = 0.011) and pPD (12.5 nM: p = 0.020; 2 nM: p < 0.001), respectively. Comparing the groups separated based on time prior to diagnosis (0–4 years and >4 years prior to diagnosis), we observed a significant reduction in anti-αSyn nAbs in pMSA at 12 nM (p = 0.043) and 2 nM (p = 0.027) 0–4 years prior to diagnosis compared to controls. In pPD we observed a reduction at 12 nM 0–4 years prior to diagnosis (p = 0.017) and a reduction at 2 nM in pPD at >4 years prior (p = 0.004) and 0–4 years prior (p = 0.004) compared to controls. Using linear regression analyses, only pMSA at 2 nM showed a significant decrease of high-affinity nAbs correlated with the prodromal age (Pearson’s r = −0.367, CI95%: −0.60 to −0.08, p = 0.014) (Figure 1K). All statistics and correlation analyses are summarized in Tables S1 and S2, respectively.

2.2. Anti-αSyn IgG Subclasses and IgM nAbs in pMSA and pPD

Total amounts of serum αSyn were measured by MSD commercial assay. Interestingly, we observed an increased amount of total αSyn in pPD compared to pMSA (p = 0.004) and controls (p < 0.001) (Figure 3A). The significant increase was secluded to >4 years prior to diagnosis compared to both pMSA (p = 0.004) and controls (p < 0.001).

The data were analyzed using R v. 3.5.2 [52] and GraphPad Prism v. 9.3.1 (GraphPad Software Inc., San Diego, CA, USA). Differences in demographics were tested using Fischer’s exact test for sex, Kruskall–Wallis test with Dunn’s multiple comparison test for age at sample withdrawal, and Mann–Whitney U test for Age at diagnosis and prodromal age (years prior to diagnosis). Outliers were excluded using the ROUT test with false discovery rate, Q, set at 1%. The percentage of maximum binding was calculated as following: % of max binding = 100 − (ODread out − OD2000nM competition)/(OD0nM competition − OD2000nM competition) × 100. For group comparison, we used multiple linear regression including age and sex as possible confounding variables using Anova from the car package [53]. For multiple comparisons using Tukey’s range test including confounding variables, the glht and mcp functions from the multcomp package [54] were applied. To determine associations with prodromal age and measured outcomes, Pearson’s correlation was used. Differences were considered significant at p < 0.05.

In conclusion, this study revealed that the decline in repertoire of high-affinity anti-αSyn nAbs in MSA and PD patients appears to be present already in the prodromal phases of MSA and PD. Furthermore, our study supports the supposition that the anti-αSyn IgG nAb responses in PD are dominant at early disease stages. This can be a classical IgG1 response to the increased serum concentration of circulating αSyn protein. These results further frame how immunopathogenesis may be a contributing factor to the etiology of synucleinopathies and thereby advocates for effective, passive immunizations already in prodromal or/and early stages of synucleinopathies.

This study was approved by the regional ethical committee of the Capital Region of Denmark (H-15016232) and the Data Protection Agency for RegionH (P-2020-937).

Data can be accessed upon reasonable request. 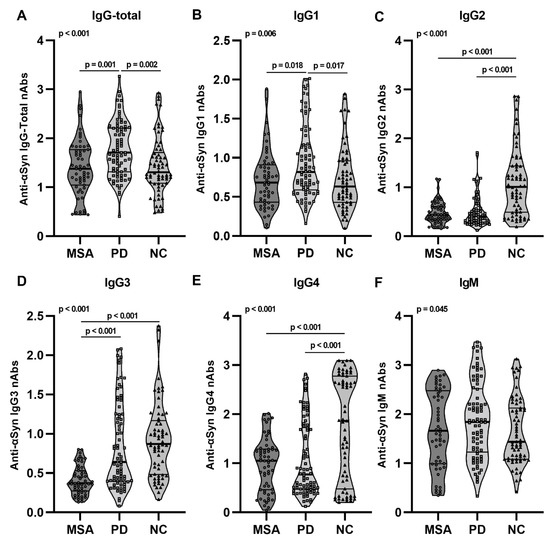