In this study, the immunomodulatory effects of a sequential micro-immunotherapy medicine, referred as MIM-seq, were appraised in human primary M1 and M2 macrophages, in which the secretion of pro-inflammatory cytokines, such as interleukin (IL)-1β, IL-6, IL-12, IL-23, and tumor necrosis factor (TNF)-alpha, was inhibited. In addition, the potential anti-proliferative effects of MIM-seq on tumor cells was assessed in three models of colorectal cancer (CRC): an in vitro two-dimensions (2D) model of HCT-116 cells, an in vitro tri-dimensional (3D) model of spheroids, and an in vivo model of subcutaneous xenografted mice. In these models, MIM-seq displayed anti-proliferative effects when compared with the vehicle. In vivo, the tumor growth was slightly reduced in MIM-seq-treated animals. Moreover, MIM-seq could slightly reduce the growth of our spheroid models, especially under serum-deprivation. When MIM-seq was combined with two well-known anti-cancerogenic agents, either resveratrol or etoposide, MIM-seq could even further reduce the spheroid’s volume, pointing up the need to further assess whether MIM-seq could be beneficial for CRC patients as an adjuvant therapy. Altogether, these data suggest that MIM-seq could have anti-tumor properties against CRC and an immunomodulatory effect towards the mediators of inflammation, whose systemic dysregulation is considered to be a poor prognosis for patients. View Full-Text
Keywords: micro-immunotherapy; MIM-seq; macrophages; immunomodulation; potential anti-tumor agent; colorectal cancer; 3D tumor spheroids micro-immunotherapy; MIM-seq; macrophages; immunomodulation; potential anti-tumor agent; colorectal cancer; 3D tumor spheroids
►▼ Show Figures 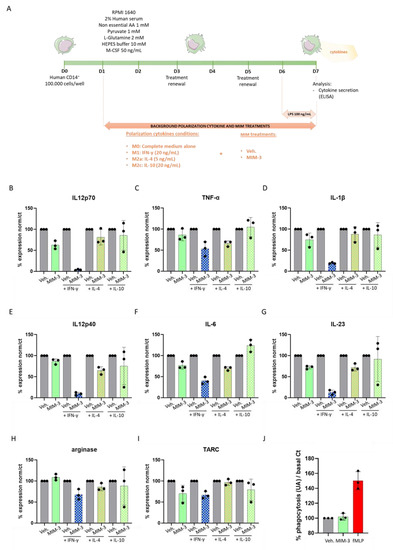