Protein glycosylation requires dolichyl phosphate as a carbohydrate carrier. Dolichols are α-saturated polyprenols, and their saturation in S. cerevisiae is catalyzed by polyprenyl reductase Dfg10 together with some other unknown enzymes. The aim of this study was to identify such enzymes in Candida. The Dfg10 polyprenyl reductase from S. cerevisiae comprises a C-terminal 3-oxo-5-alpha-steroid 4-dehydrogenase domain. Alignment analysis revealed such a domain in two ORFs (orf19.209 and orf19.3293) from C. albicans, which were similar, respectively, to Dfg10 polyprenyl reductase and Tsc13 enoyl-transferase from S. cerevisiae. Deletion of orf19.209 in Candida impaired saturation of polyprenols. The Tsc13 homologue turned out not to be capable of saturating polyprenols, but limiting its expression reduce the cellular level of dolichols and polyprenols. This reduction was not due to a decreased expression of genes encoding cis-prenyltransferases from the dolichol branch but to a lower expression of genes encoding enzymes of the early stages of the mevalonate pathway. Despite the resulting lower consumption of acetyl-CoA, the sole precursor of the mevalonate pathway, it was not redirected towards fatty acid synthesis or elongation. Lowering the expression of TSC13 decreased the expression of the ACC1 gene encoding acetyl-CoA carboxylase, the key regulatory enzyme of fatty acid synthesis and elongation. View Full-Text
Keywords: Candida albicans; Tsc13 trans-2 enoyl-CoA reductase; Dfg10 polyprenyl reductase Candida albicans; Tsc13 trans-2 enoyl-CoA reductase; Dfg10 polyprenyl reductase
►▼ Show Figures 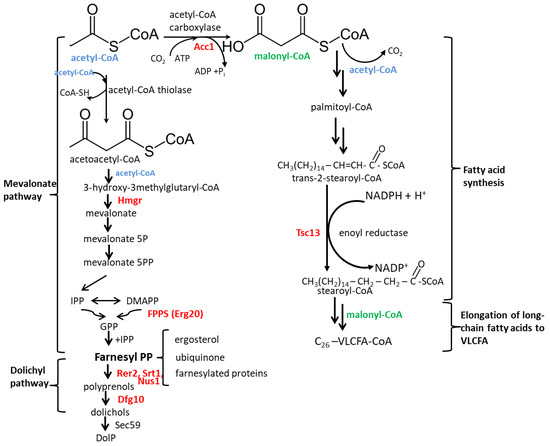