The Predictive Role of Biomarkers and Genetics in Childhood Asthma Exacerbations

Low Protein Kinase C zeta (PKCζ) levels in cord blood T cells (CBTC) have been shown to correlate with the development of allergic sensitization in childhood. However, little is known about the mechanisms responsible. We have examined the relationship between the expression of different levels of PKCζ in CBTC and their development into mature T cell cytokine producers that relate to allergy or anti-allergy promoting cells. Maturation of naïve CBTC was initiated with anti-CD3/-CD28 antibodies and recombinant human interleukin-2 (rhIL-2). To stimulate lymphocyte proliferation and cytokine production the cells were treated with Phytohaemagglutinin (PHA) and Phorbol myristate acetate (PMA). Irrespective of the PKCζ levels expressed, immature CBTC showed no difference in lymphocyte proliferation and the production of T helper 2 (Th2) cytokine interleukin-4 (IL-4) and Th1 cytokine, interferon-gamma (IFN-γ), and influenced neither their maturation from CD45RA+ to CD45RO+ cells nor cell viability/apoptosis. However, upon maturation the low PKCζ expressing cells produced low levels of the Th1 cytokines, IFN-γ, IL-2 and tumour necrosis factor-alpha (TNF), no changes to levels of the Th2 cytokines, IL-4, IL-5 and IL-13, and an increase in the Th9 cytokine, IL-9. Other cytokines, lymphotoxin-α (LT-α), IL-10, IL-17, IL-21, IL-22 and Transforming growth factor-beta (TGF-β) were not significantly different. The findings support the view that low CBTC PKCζ levels relate to the increased risk of developing allergic diseases. View Full-Text
Keywords: cord blood T cells; T cell maturation; Th1 and Th2 subsets; PKCζ; cytokines; allergy cord blood T cells; T cell maturation; Th1 and Th2 subsets; PKCζ; cytokines; allergy
►▼ Show Figures 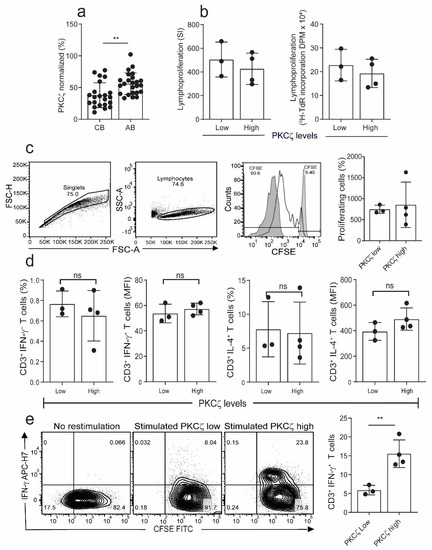