Background: Hepatocyte growth factor (HGF) is an endogenously induced bioactive molecule that has strong anti-apoptotic and tissue repair activities. In this research, we identified APOA4 as a novel pharmacodynamic (PD) marker of the recombinant human HGF (rh-HGF), E3112. Methods: rh-HGF was administered to mice, and their livers were investigated for the PD marker. Candidates were identified from soluble proteins and validated by using human hepatocytes in vitro and an animal disease model in vivo, in which its c-Met dependency was also ensured. Results: Among the genes induced or highly enhanced after rh-HGF exposure in vivo, a soluble apolipoprotein, Apoa4, was found to be induced by rh-HGF in the murine liver. By using primary cultured human hepatocytes, the significant induction of human APOA4 was observed at the mRNA and protein levels, and it was inhibited in the presence of a c-Met inhibitor. Although mice constitutively expressed Apoa4 mRNA in the small intestine and the liver, the liver was the primary organ affected by administered rh-HGF to strongly induce APOA4 in a dose- and c-Met-dependent manner. Serum APOA4 levels were increased after rh-HGF administration, not only in normal mice but also in anti-Fas-induced murine acute liver failure (ALF), which confirmed the pharmacodynamic nature of APOA4. Conclusions: APOA4 was identified as a soluble PD marker of rh-HGF with c-Met dependency. It should be worthwhile to clinically validate its utility through clinical trials with healthy subjects and ALF patients. View Full-Text
Keywords: rh-HGF; APOA4; ALF; c-Met; Fas rh-HGF; APOA4; ALF; c-Met; Fas
►▼ Show Figures 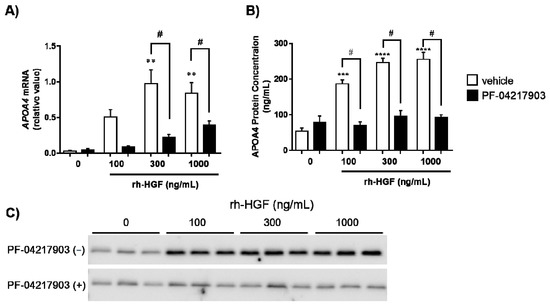