Annexins A2, A6 and Fetuin-A Affect the Process of Mineralization in Vesicles Derived from Human Osteoblastic hFOB 1.19 and Osteosarcoma Saos-2 Cells

The mineralization process is initiated by osteoblasts and chondrocytes during intramembranous and endochondral ossifications, respectively. Both types of cells release matrix vesicles (MVs), which accumulate Pi and Ca2+ and form apatites in their lumen. Tissue non-specific alkaline phosphatase (TNAP), a mineralization marker, is highly enriched in MVs, in which it removes inorganic pyrophosphate (PPi), an inhibitor of apatite formation. MVs then bud from the microvilli of mature osteoblasts or hypertrophic chondrocytes and, thanks to the action of the acto-myosin cortex, become released to the extracellular matrix (ECM), where they bind to collagen fibers and propagate mineral growth. In this report, we compared the mineralization ability of human fetal osteoblastic cell line (hFOB 1.19 cells) with that of osteosarcoma cell line (Saos-2 cells). Both types of cells were able to mineralize in an osteogenic medium containing ascorbic acid and beta glycerophosphate. The composition of calcium and phosphate compounds in cytoplasmic vesicles was distinct from that in extracellular vesicles (mostly MVs) released after collagenase-digestion. Apatites were identified only in MVs derived from Saos-2 cells, while MVs from hFOB 1.19 cells contained amorphous calcium phosphate complexes. In addition, AnxA6 and AnxA2 (nucleators of mineralization) increased mineralization in the sub-membrane region in strongly mineralizing Saos-2 osteosarcoma, where they co-localized with TNAP, whereas in less mineralizing hFOB 1.19 osteoblasts, AnxA6, and AnxA2 co-localizations with TNAP were less visible in the membrane. We also observed a reduction in the level of fetuin-A (FetuA), an inhibitor of mineralization in ECM, following treatment with TNAP and Ca channels inhibitors, especially in osteosarcoma cells. Moreover, a fraction of FetuA was translocated from the cytoplasm towards the plasma membrane during the stimulation of Saos-2 cells, while this displacement was less pronounced in stimulated hFOB 19 cells. In summary, osteosarcoma Saos-2 cells had a better ability to mineralize than osteoblastic hFOB 1.19 cells. The formation of apatites was observed in Saos-2 cells, while only complexes of calcium and phosphate were identified in hFOB 1.19 cells. This was also evidenced by a more pronounced accumulation of AnxA2, AnxA6, FetuA in the plasma membrane, where they were partly co-localized with TNAP in Saos-2 cells, in comparison to hFOB 1.19 cells. This suggests that both activators (AnxA2, AnxA6) and inhibitors (FetuA) of mineralization were recruited to the membrane and co-localized with TNAP to take part in the process of mineralization. View Full-Text
Keywords: annexins; fetuin-A; mineralization; matrix vesicles; hFOB 1.19 osteoblastic cells; Saos-2 osteosarcoma cells annexins; fetuin-A; mineralization; matrix vesicles; hFOB 1.19 osteoblastic cells; Saos-2 osteosarcoma cells
►▼ Show Figures 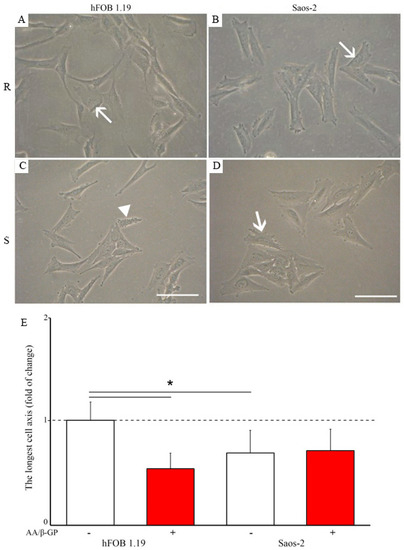