Iron Therapy in Chronic Kidney Disease: Days of Future Past

HIF1A: A Putative Modifier of Hemochromatosis

HFE-related hereditary hemochromatosis (HH) is characterized by marked phenotypic heterogeneity. Homozygosity for p.C282Y is a low penetrance genotype suggesting that the HFE-HH is a multifactorial disease resulting from a complex interaction involving a major gene defect, genetic background and environmental factors. We performed a targeted NGS-based gene panel to identify new candidate modifiers by using an extreme phenotype sampling study based on serum ferritin and iron removed/age ratio. We found an increased prevalence of the HIF1A p.Phe582Ser and p.Ala588Thr variants in patients with a severe iron and clinical phenotype. Accordingly, Huh-7 cells transfected with both variants showed significantly lower HAMP promoter activity by luciferase assay. The qRT-PCR assays showed a downregulation of hepcidin and an upregulation of the HIF1A target genes (VEGF, HMOX, FUR, TMPRSS6) in cells transfected with the HIF1A-P582S vector. We identified mutations in other genes (e.g., Serpina1) that might have some relevance in single cases in aggravating or mitigating disease manifestation. In conclusion, the present study identified HIF1A as a possible modifier of the HFE-HH phenotype cooperating with the genetic defect in downregulating hepcidin synthesis. In addition, this study highlights that an NGS-based approach could broaden our knowledge and help in characterizing the genetic complexity of HFE-HH patients with a severe phenotype expression. View Full-Text
Keywords: hereditary hemochromatosis; HFE; modifiers; HIF1A hereditary hemochromatosis; HFE; modifiers; HIF1A
►▼ Show Figures 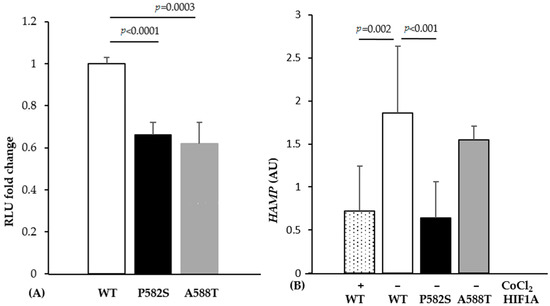