Sprouty3, but Not Sprouty1, Expression Is Beneficial for the Malignant Potential of Osteosarcoma Cells
Previous Article in Journal

:
Root selection of their associated microbiome composition and activities is determined by the plant’s developmental stage and distance from the root. Total gene abundance, structure and functions of root-associated and rhizospheric microbiomes were studied throughout wheat growth season under field conditions. On the root surface, abundance of the well-known wheat colonizers Proteobacteria and Actinobacteria decreased and increased, respectively, during spike formation, whereas abundance of Bacteroidetes was independent of spike formation. Metagenomic analysis combined with functional co-occurrence networks revealed a significant impact of plant developmental stage on its microbiome during the transition from vegetative growth to spike formation. For example, gene functions related to biofilm and sensorial movement, antibiotic production and resistance and carbons and amino acids and their transporters. Genes associated with these functions were also in higher abundance in root vs. the rhizosphere microbiome. We propose that abundance of transporter-encoding genes related to carbon and amino acid, may mirror the availability and utilization of root exudates. Genes related to antibiotic resistance mechanisms were abundant during vegetative growth, while after spike formation, genes related to the biosynthesis of various antibiotics were enriched. This observation suggests that during root colonization and biofilm formation, bacteria cope with competitor’s antibiotics, whereas in the mature biofilm stage, they invest in inhibiting new colonizers. Additionally, there is higher abundance of genes related to denitrification in rhizosphere compared to root-associated microbiome during wheat growth, possibly due to competition with the plant over nitrogen in the root vicinity. We demonstrated functional and phylogenetic division in wheat root zone microbiome in both time and space: pre- and post-spike formation, and root-associated vs. rhizospheric niches. These findings shed light on the dynamics of plant–microbe and microbe–microbe interactions in the developing root zone.
Keywords:
wheat; spike; root-associated; rhizosphere; microbiome; metagenome

The rhizosphere is a hotspot for plant and soil microbiome interactions. Rhizosphere microbiome composition and function are mostly shaped by soil type, plant species and plant genotypes [1,2,3,4]. Plants select their associated bacteria by depositing specific exudates in the soil–root interface [5,6]. Roots secrete large amounts of carbon as exudates that can be divided into two major classes of metabolites. The first consists of high-molecular-weight compounds such as polysaccharides and proteins, and the second of low-molecular-weight metabolites, including amino acids, organic acids, ions, sugars, vitamins and various secondary metabolites [7,8,9]. The root tip is the major source of root exudation [10,11,12], along with root elongation zones and root hairs [13,14]. As a result, a gradient of exudates is created from the roots to the surrounding soil, with the highest concentration near the root surface [15]. Thus, the root surface provides a more nutrient-rich environment than the rhizosphere, enabling microorganisms to colonize and proliferate.
Plant roots and their microbiome (both root-associated and rhizosphere) are continuously interacting. The root-associated bacteria can manipulate plant exudates by accelerating their diffusion, as well as altering plant carbon allocation to the roots [16]. In many plant species, specific microbiome functions have been shown to be associated with the microorganism–plant interactions. These functions include motility and adhesion to roots, biofilm formation, metabolism of nitrogen, carbohydrates and vitamins and degradation of xenobiotics [4,17,18]. In Arabidopsis, it has been proposed that roots of young seedlings secrete high levels of sugars to attract colonization of diverse bacteria, whereas in older plants, roots secrete phenolic substances to select specific rhizosphere bacteria [19,20]. A plant’s developmental stage has also been shown to affect root-exudation patterns [16,21]. This developmental stage-dependent exudation was recently shown to influence rhizosphere community structure in broomcorn millet [22] and root-associated community structure in rice [23].
Although the root surface provides an environment that is much richer in nutrients, most studies have focused on the influence of exudates on the rhizospheric bacterial community [1,9,24,25,26] rather than the root-associated one. Moreover, the effects of plant growth stage on rhizosphere community functions, and particularly on the root-associated community, remain unclear. To close this gap, we followed field-grown wheat throughout the growth season from emergence to spike maturation and compared the rhizosphere bacterial community (inhabiting the soil surrounding the roots) to that of root-associated bacteria (sampled from washed roots). We describe and discuss the changes in root-associated and rhizosphere bacterial community structure and functions with stages of plant development.

Wheat grown under commercial field conditions was sampled from sprout emergence up to week 17, when some plants produced green spikes whereas in others, the spikes were already more mature. Rhizosphere (soil sampled by shaking from the roots) and washed roots (root-associated) were collected at weeks 1, 2, 5, 9, 12 and 17. The spatial (rhizosphere vs. root-associated) and temporal (before vs. after spike formation) effects on the bacterial community structures and functional profiles were analyzed.

2.2. Influence of Niche and Spike Formation on Bacterial Community Composition

2.3. The Effect of Niche and Spike Formation on Specific Root-Associated and Rhizosphere Gene Functions

Wheat (Triticum aestivum cv. Tishrey) was cultivated in a field at the Volcani Center, Rishon LeZion, Israel. The soil was clay loam (36% clay, 22% silt and 42% sand) and the soil parameters prior to wheat sowing were: pH 7.99 ± 0.04, electrical conductivity 99 ± 2 µS/m, N-NO3 0.55 ± 0.05 mg/kg, NH4 0.36 ± 0.02 mg/kg, P-PO4 0.06 ± 0.01 mg/kg, total soluble organic carbon 4.64 ± 0.08 mg/kg, and total soluble nitrogen 0.87 ± 0.01 mg/kg. The field was amended once with cattle urine (48 m3/acre) prior to wheat sowing in November 2015. Weather conditions during wheat growth are provided in Supplemental Figure S1.
During wheat growth and development, microbiomes were sampled as follows: rhizosphere microbiome was collected from the soil dislodged from the roots by shaking. The samples were immediately placed on ice and stored at −80 °C for further analyses. For the root-associated microbiome, roots were washed three times with saline solution (0.85% NaCl) and immediately placed on ice and stored at −80 °C for further analyses. Samples were collected at the following developmental stages: emergence with one or two leaves (1st week, 16 December 2015), tillering (2nd week), jointing (5th week), heading (9th week), anthesis (12th week) and spike maturation (17th week). Root and rhizosphere samples were collected in triplicate in weeks 1, 2, 5, 9 and 12; in week 17, two subsamples were collected for each spike category (i.e., green and mature yellow, Supplemental Figure S2).

4.2. Rhizosphere and Root DNA Extraction for Sequencing and qPCR

To obtain the root-associated microbiome, wheat roots were vortexed three time with 85% saline solution, until no visible soil particles were attached to the roots. Total DNA was extracted from 0.4 g of complete root system and 0.3 g rhizosphere soil, using the Exgene Soil DNA mini-isolation kit (GeneAll, Seoul, Korea) according to the manufacturer’s instructions.

Shotgun metagenomic libraries were prepared as described previously [52]. The final size-selected pool was sequenced in an Illumina NovaSeq instrument with an S4 flow cell, employing 2 × 150 base reads. Library preparation and pooling were performed at the University of Illinois at Chicago Sequencing Core (UICSQC), and sequencing was performed by Novogene Corporation (Chula Vista, CA, USA).
In total, we obtained 1019 Gb of information, with 33–44 million sequences per root sample and 34–53 million sequences per rhizosphere sample. These sequence data were submitted to the Sequence Read Archive (SRA) of the NCBI databases under accession number SUB8180046, BioProject: PRJNA664890.
All reads were subjected to quality control using FastQC v0.11.3 [53] and barcode trimming using Trimmomatics v0.32 [54]. Reads were mapped to the whole wheat metagenome using Bowtie2 v2.3.5.1 [55], and mapped reads (wheat genes) were filtered out from each sample. Then, short Illumina reads in triplicate from each week (1, 2, 5, 9 and 12) were assembled using SPADES v3.13.0 [56] into longer contigs, to create five wheat-root microbiome catalogues, one for each week. Six rhizosphere microbiome catalogues were created, one for each week (1, 2, 5 and 9), and two for week 12 due to its overall size. Reads with four replicates from week 17 were separated into two root microbiome catalogues and two rhizosphere microbiome catalogues. Altogether seven root-associated catalogues and eight rhizosphere catalogues were created (Supplemental Table S2). Prodigal v2.6.2 [57] was used for protein-coding gene prediction for each of those 15 catalogues. To create a non-redundant set of genes for each niche separately, we used CD-HIT-EST software v4.8.1 [58] with a similarity threshold of 95%. Those genes were used as the root-associated gene catalogue, which included 53 million partial genes, and for the rhizosphere gene catalogue, which included 91 million partial genes. These gene catalogues were searched against the non-redundant NCBI protein database using DIAMOND sensitive algorithm v0.9.24.125 [59] to assign taxonomic and functional annotations. Results were then uploaded to MEGAN Ultimate edition software v6.15.2 [60]. The lowest common ancestor (LCA) algorithm was applied (parameters used with minimum bit score of 70, minimum support of 5%, and 30% top threshold) to compute the assignment of genes to specific taxa. For functional annotation, the Kyoto Encyclopedia of Genes and Genomes (KEGG) database [61] was used. Following annotation, to generate taxonomic and functional count tables, each library was mapped to the gene catalogue with Trinity mapping software v2.8.4 [62], with Bowtie2-modified parameters (--no-unal --gbar 99999999 -k 250 --dpad 0 --mp 1,1 --np 1 --score-min L,0,-0.9 -L 20 -i S,1,0.50).

This research was supported by the Israel Science Foundation (Research Project 1281/13).

The sequence data from root and rhizosphere samples was submitted to the Sequence Read Archive (SRA) of the NCBI databases under accession number SUB8180046, BioProject: PRJNA664890.

We acknowledge the computational help of Matan Cohen. 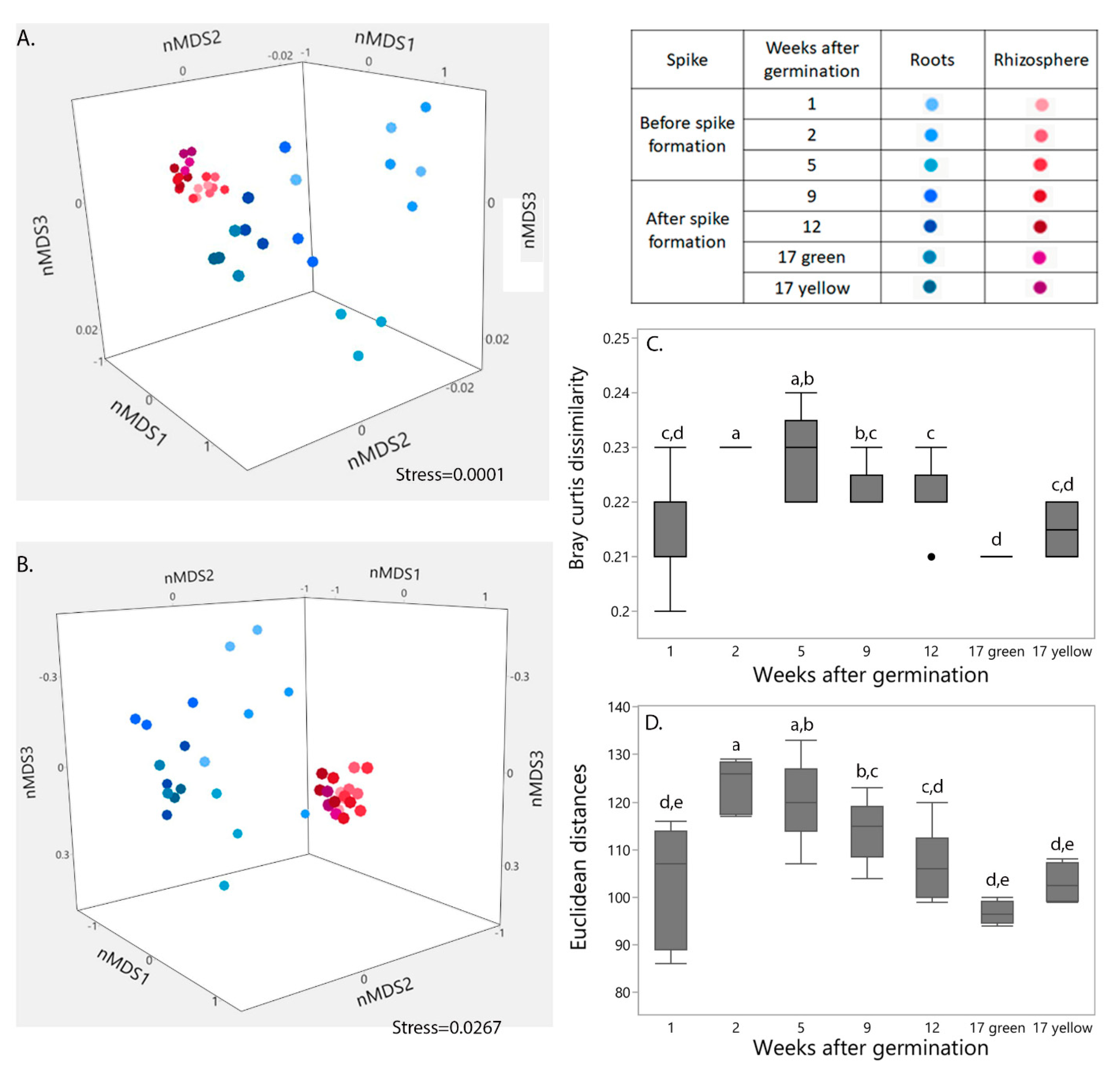 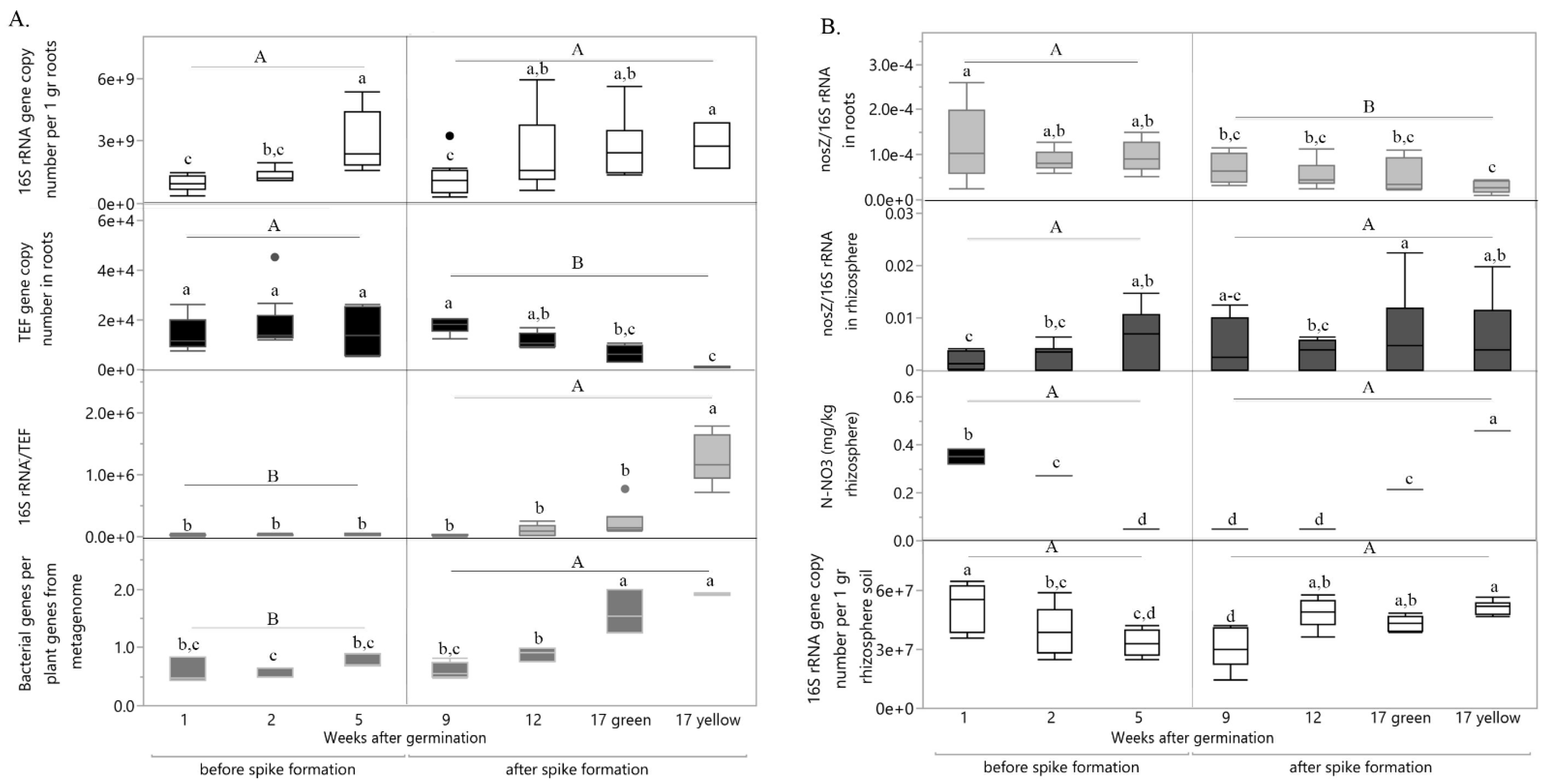 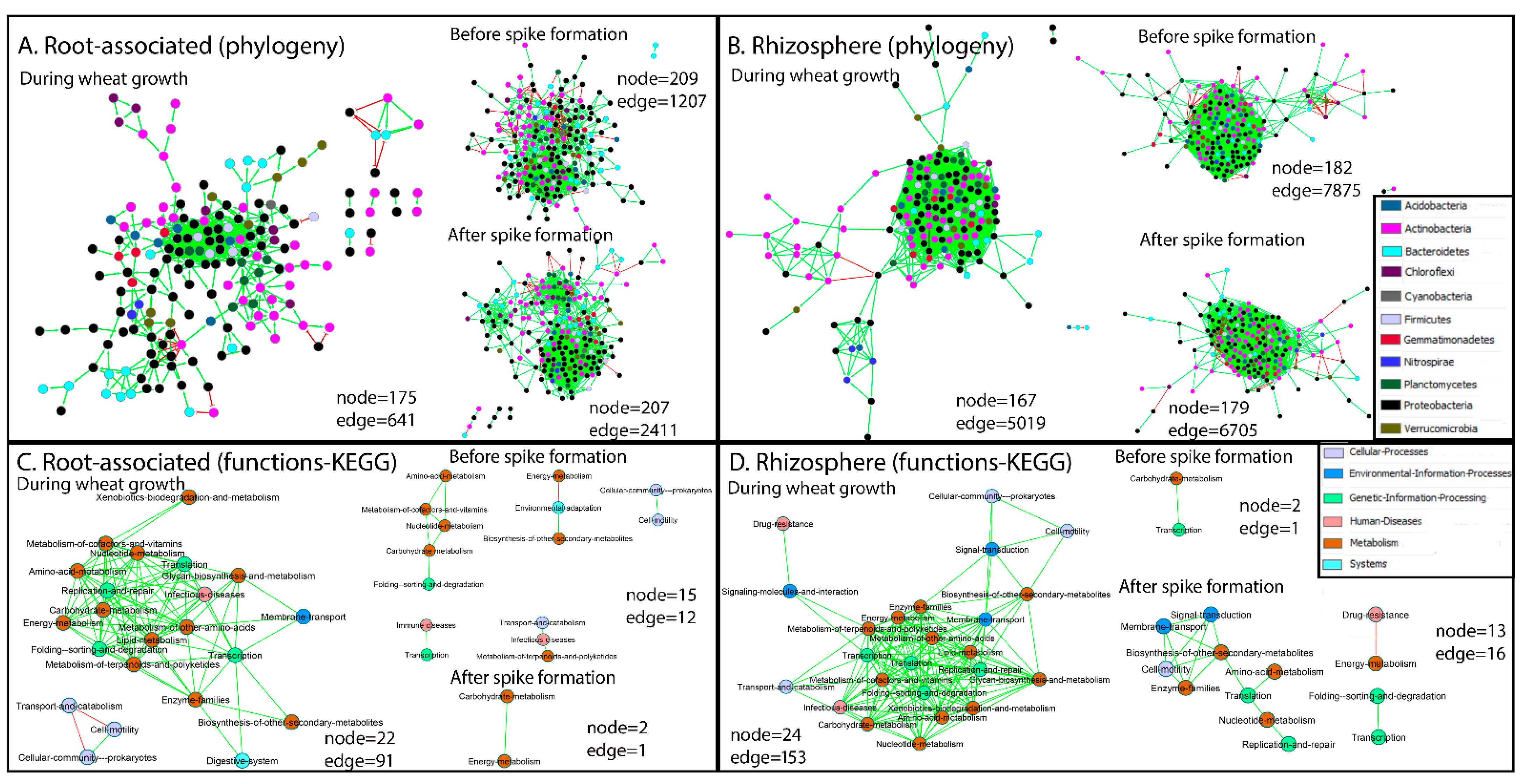 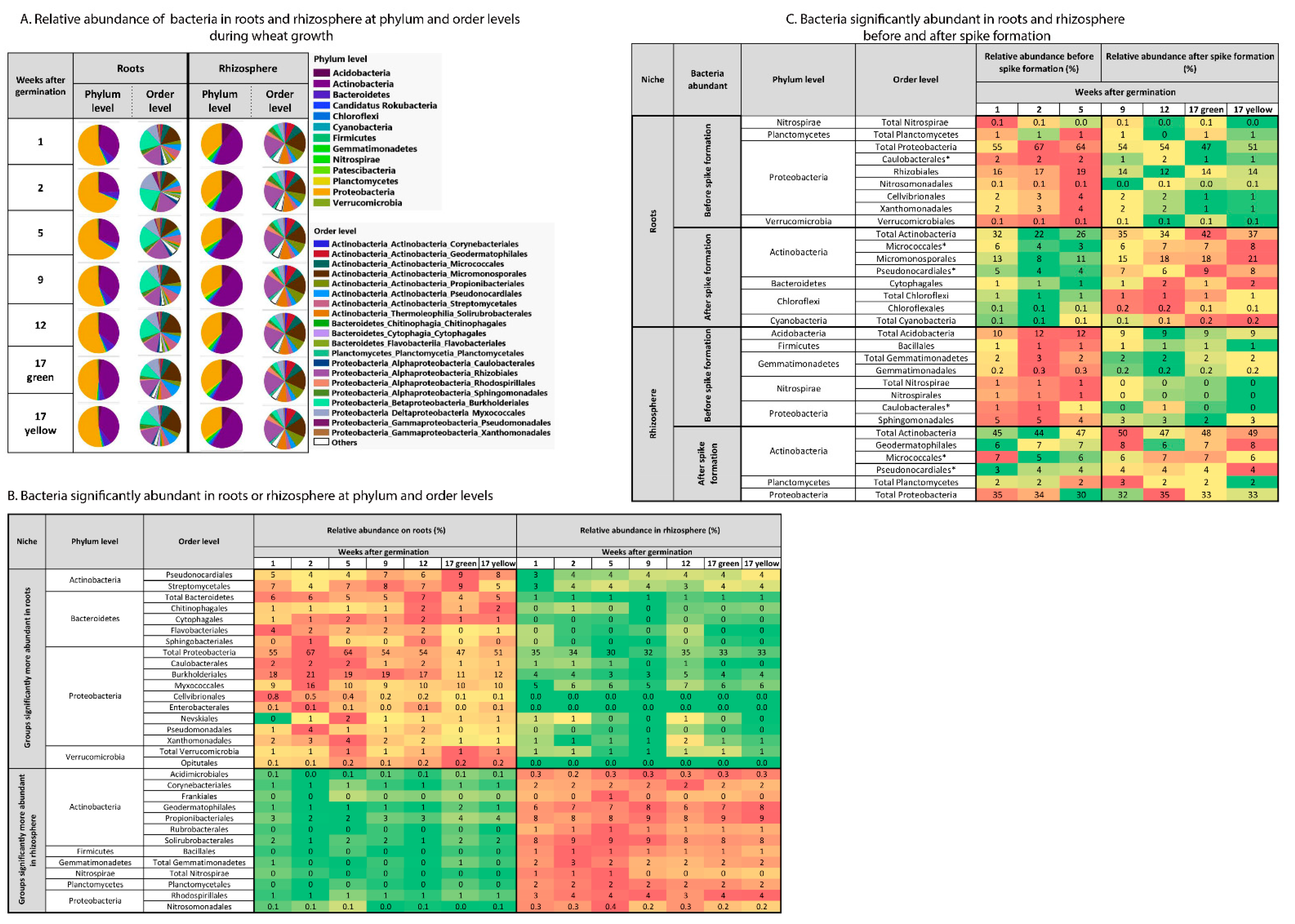 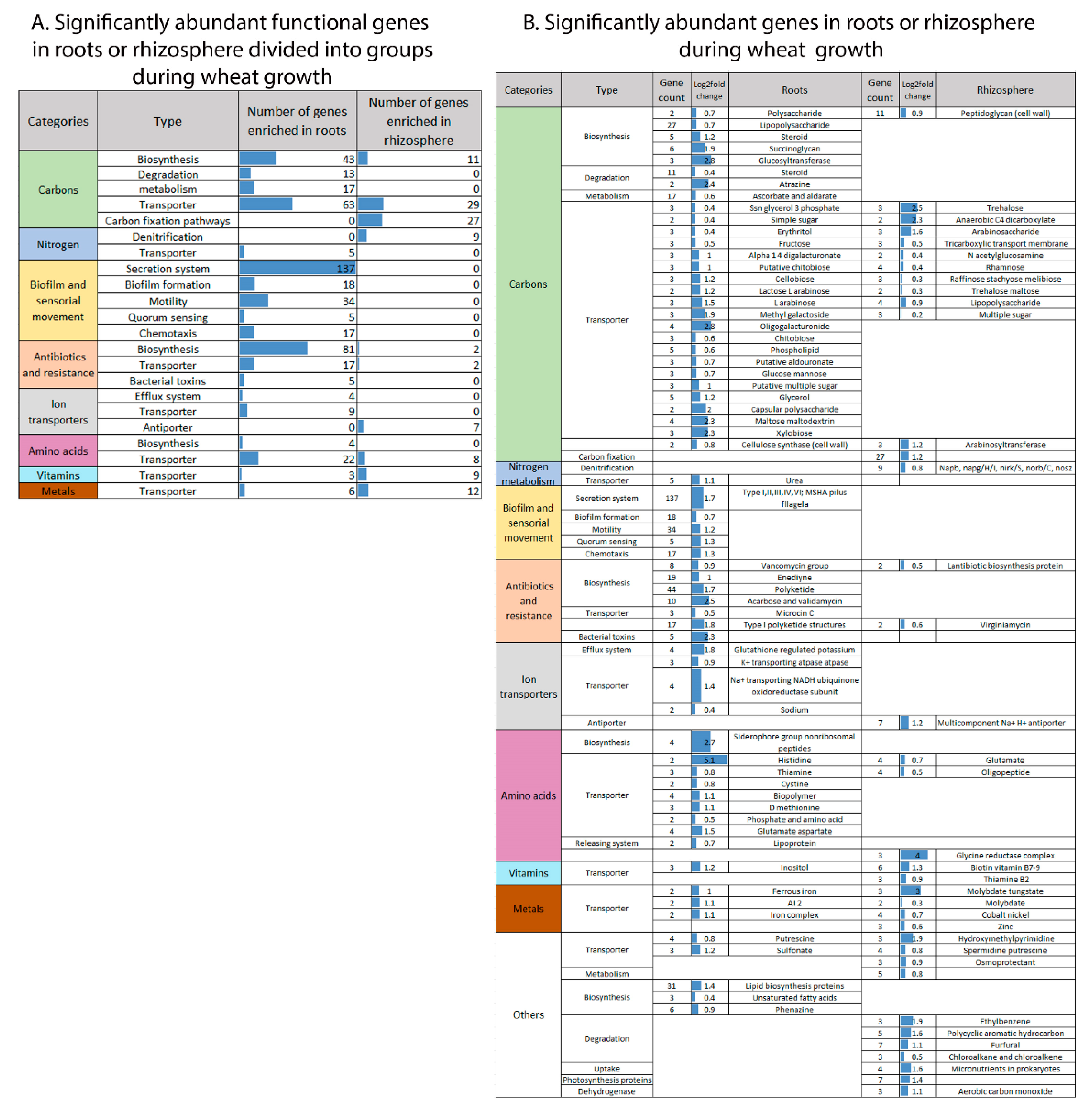 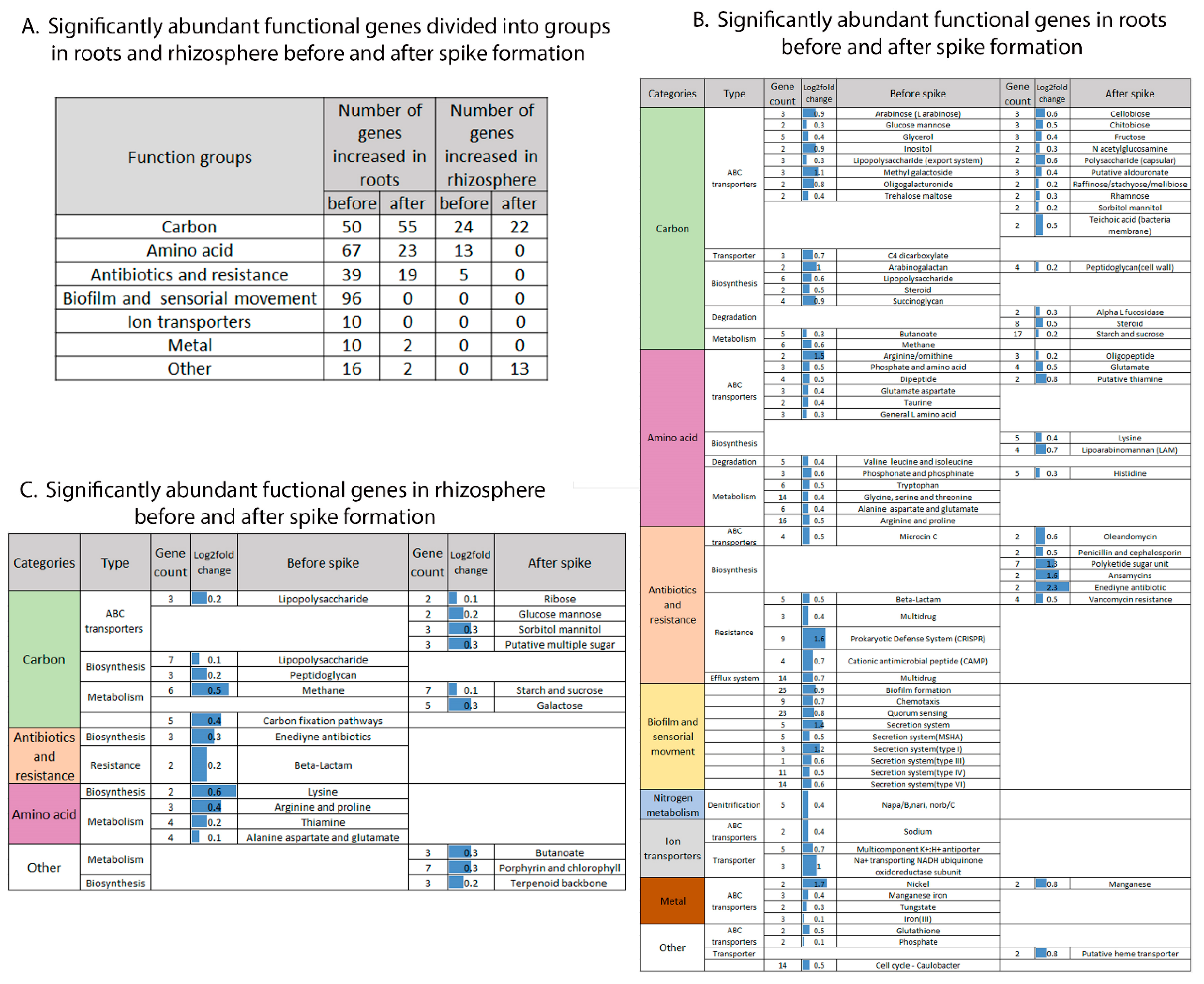 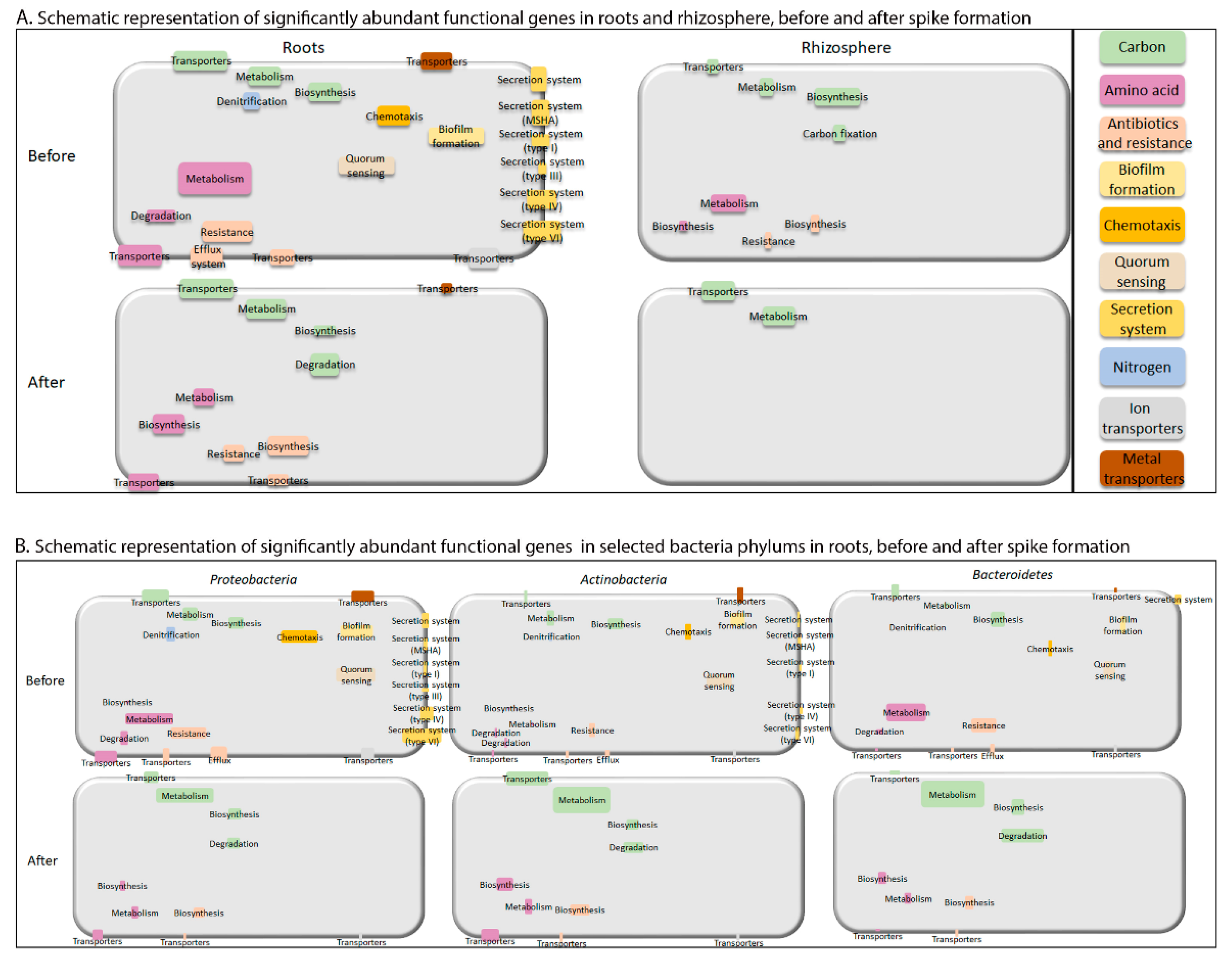