Cancer Therapy Challenge: It Is Time to Look in the “St. Patrick’s Well” of the Nature
Previous Article in Journal

Brassinazole-resistant (BZR) family genes encode plant-specific transcription factors (TFs), play essential roles in the regulation of plant growth and development, and have multiple stress-resistance functions. Nicotiana benthamiana is a model plant widely used in basic research. However, members of the BZR family in N. benthamiana have not been identified, and little is known about their function in abiotic stress. In this study, a total of 14 BZR members were identified in the N. benthamiana genome, which could be divided into four groups according to a phylogenetic tree. NbBZRs have similar exon-intron structures and conserved motifs, and may be regulated by cis-acting elements such as STRE, TCA, and ARE, etc. Organ-specific expression analysis showed that NbBZR members have different and diverse expression patterns in different tissues, and most of the members are expressed in roots, stems, and leaves. The analysis of the expression patterns in response to different abiotic stresses showed that all the tested NbBZR members showed a significant down-regulation after drought treatment. Many NbBZR genes also responded in various ways to cold, heat and salt stress treatments. The results imply that NbBZRs have multiple functions related to stress resistance. View Full-Text
Keywords: Brassinazole-resistant (BZR) transcription factor; Nicotiana benthamiana; genome-wide expression analysis; abiotic stress Brassinazole-resistant (BZR) transcription factor; Nicotiana benthamiana; genome-wide expression analysis; abiotic stress
►▼ Show Figures 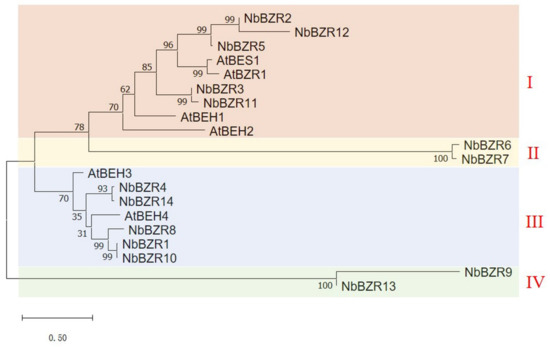