Streptococcus mutans is the main early colonizing cariogenic bacteria because it recognizes salivary pellicle receptors. The Antigen I/II (Ag I/II) of S. mutans is among the most important adhesins in this process, and is involved in the adhesion to the tooth surface and the bacterial co-aggregation in the early stage of biofilm formation. However, this protein has not been used as a target in a virtual strategy search for inhibitors. Based on the predicted binding affinities, drug-like properties and toxicity, molecules were selected and evaluated for their ability to reduce S. mutans adhesion. A virtual screening of 883,551 molecules was conducted; cytotoxicity analysis on fibroblast cells, S. mutans adhesion studies, scanning electron microscopy analysis for bacterial integrity and molecular dynamics simulation were also performed. We found three molecules ZINC19835187 (ZI-187), ZINC19924939 (ZI-939) and ZINC19924906 (ZI-906) without cytotoxic activity, which inhibited about 90% the adhesion of S. mutans to polystyrene microplates. Molecular dynamic simulation by 300 nanoseconds showed stability of the interaction between ZI-187 and Ag I/II (PDB: 3IPK). This work provides new molecules that targets Ag I/II and have the capacity to inhibit in vitro the S. mutans adhesion on polystyrene microplates. View Full-Text
Keywords: Streptococcus mutans; adhesion proteins; antigen I/II; dental caries; structure-based virtual screening; molecular dynamics Streptococcus mutans; adhesion proteins; antigen I/II; dental caries; structure-based virtual screening; molecular dynamics
►▼ Show Figures 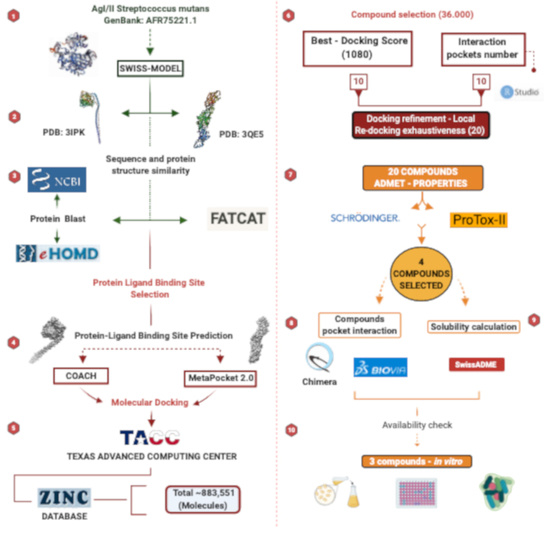