Cannabidiol as a Potential Treatment for Anxiety and Mood Disorders: Molecular Targets and Epigenetic Insights from Preclinical Research
Previous Article in Journal

Cannabidiol for Pain Treatment: Focus on Pharmacology and Mechanism of Action

Substance use disorder (SUD) is a serious public health problem worldwide for which available treatments show limited effectiveness. Since the legalization of cannabis and the approval of cannabidiol (CBD) by the US Food and Drug Administration, therapeutic potential of CBD for the treatment of SUDs and other diseases has been widely explored. In this mini-review article, we first review the history and evidence supporting CBD as a potential pharmacotherapeutic. We then focus on recent progress in preclinical research regarding the pharmacological efficacy of CBD and the underlying receptor mechanisms on addictive-like behavior. Growing evidence indicates that CBD has therapeutic potential in reducing drug reward, as assessed in intravenous drug self-administration, conditioned place preference and intracranial brain-stimulation reward paradigms. In addition, CBD is effective in reducing relapse in experimental animals. Both in vivo and in vitro receptor mechanism studies indicate that CBD may act as a negative allosteric modulator of type 1 cannabinoid (CB1) receptor and an agonist of type 2 cannabinoid (CB2), transient receptor potential vanilloid 1 (TRPV1), and serotonin 5-HT1A receptors. Through these multiple-receptor mechanisms, CBD is believed to modulate brain dopamine in response to drugs of abuse, leading to attenuation of drug-taking and drug-seeking behavior. While these findings suggest that CBD is a promising therapeutic candidate, further investigation is required to verify its safety, pharmacological efficacy and the underlying receptor mechanisms in both experimental animals and humans. View Full-Text
Keywords: cannabidiol; cocaine; CB1 receptor; CB2 receptor; TRPV1; 5-TH; addiction cannabidiol; cocaine; CB1 receptor; CB2 receptor; TRPV1; 5-TH; addiction
►▼ Show Figures 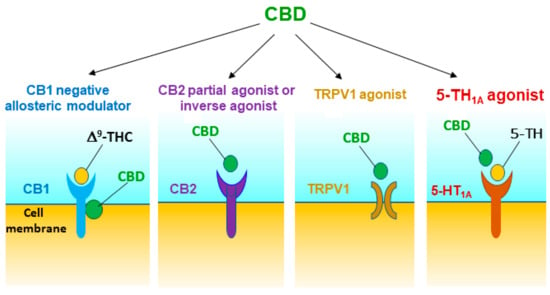