Several lines of evidence demonstrate the antioxidant, anti-inflammatory and antimicrobial activities of propolis, mostly ascribed to its polyphenol content. However, little is known regarding the bioavailability of propolis in acute and prolonged settings of oral administration. In this study, we first determined the content of the main polyphenols in a brown propolis extract obtained using a patented extraction method (Multi Dinamic Extraction—M.E.D.) by RP-HPLC-UV-PDA-MSn analysis, followed by the bioavailability of galangin and chrysin, the most abundant polyphenols in the mixture (7.8% and 7.5% respectively), following acute (single bolus of 500 mg/kg containing about 3.65 mg of the polyphenol mixture) and prolonged (100, 250 and 500 mg/kg body for 30 days) oral administration in 30 male 8 weeks old C57BL/6 wild-type mice. In the acute setting, blood was taken at 30 s and 5, 10, 15, 20, 25, 30, 45, 60 and 120 min following the oral bolus. In the prolonged setting, blood samples were obtained after 10, 20 or 30 days of administration. At the end of treatment, expression of antioxidant enzymes (superoxyde dismutase, SOD-1; catalase, CAT; glutathione peroxidase, GSS) was evaluated in liver tissue. Following both acute and prolonged administration, neither galangin nor chrysin were detectable in the plasma of mice, whereas the glucuronide metabolite of galangine was detectable 5 min after acute administration. At the end of the prolonged treatment SOD-1 was found to have increased significantly, unlike CAT and GSS. Overall, these data suggest that oral administration of whole brown propolis extract is followed by rapid absorption and metabolization of galangin followed by adaptations of the antioxidant first line defense system. View Full-Text
Keywords: brown propolis; standardized polyphenol mixture; bioavailability; in vivo antioxidant activity; superoxide dismutase brown propolis; standardized polyphenol mixture; bioavailability; in vivo antioxidant activity; superoxide dismutase
►▼ Show Figures 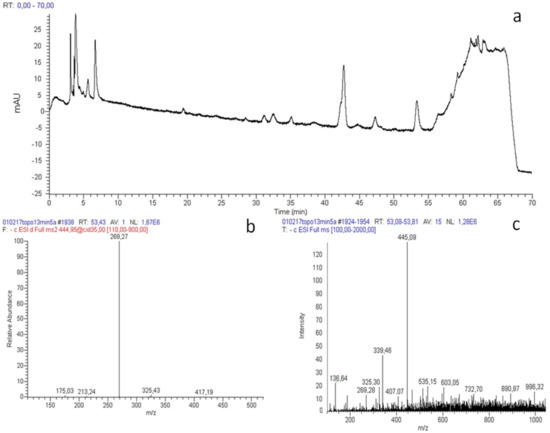