Major depressive disorder is one of the most common neuropsychiatric disorders worldwide. The treatment of choice that shows good efficacy in mood stabilization is based on selective serotonin reuptake inhibitors (SSRIs). Their primary mechanism of action is considered to be the increased synaptic concentration of serotonin through blockade of the serotonin transporter (SERT). In this study, we described an alternative mode of action of fluoxetine (FLX), which is a representative member of the SSRI class of antidepressants. We observed that FLX robustly decreases both glutamatergic and gamma-Aminobutyric acid (GABA)-ergic synaptic release in a SERT-independent manner. Moreover, we showed that this effect may stem from the ability of FLX to change the levels of main components of the SNARE (solubile N-ethylmaleimide-sensitive factor attachment protein receptor) complex. Our data suggest that this downregulation of SNARE fusion machinery involves diminished activity of protein kinase C (PKC) due to FLX-induced blockade of P/Q type of voltage-gated calcium channels (VGCCs). Taken together, by virtue of its inhibition at SERT, fluoxetine increases extracellular serotonin levels; however, at the same time, by reducing SNARE complex function, this antidepressant reduces glutamate and GABA release. View Full-Text
Keywords: fluoxetine; presynaptic activity; SNARE complex; PKC; VGCCs fluoxetine; presynaptic activity; SNARE complex; PKC; VGCCs
►▼ Show Figures 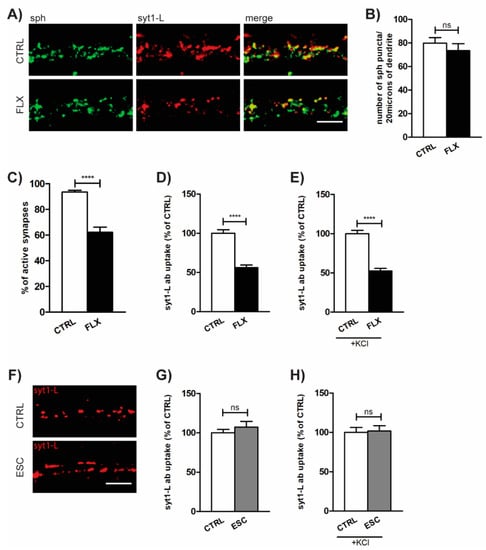