Regulation of Chemerin and CMKLR1 Expression by Nutritional Status, Postnatal Development, and Gender

Chemerin (also known as tazarotene-induced gene 2 and retinoic acid receptor responder 2) has been identified as an adipokine that exerts effects on many biological processes, including adipogenesis, angiogenesis, inflammation, immune responses, and food intake. This variety of effects has led to its implication in obesity and co-morbidities including diabetes and a risk of cardiovascular disease. The biological effects are mostly mediated by a so-called G protein-coupled receptor, chemokine-like receptor 1 (CMKLR1). Given the association of chemerin with obesity and related diseases, we decided to study in detail the regulation of chemerin and CMKLR1 expression in white adipose tissue (WAT). Specifically, we focused on their expression levels in physiological and pathophysiological settings involved in energy balance: e.g., fasting, postnatal development, and gender. We used Sprague Dawley rats with different nutritional statuses, levels of hormonal deficiency, and states of development as well as ob/ob (leptin-deficient) mice. We analysed the protein expression of both the ligand and receptor (chemerin and CMKLR1) in gonadal WAT by western blotting. We found that chemerin and CMKLR1 protein levels were regulated in WAT by different conditions associated with metabolic changes such as nutritional status, sex steroids, pregnancy, and food composition. Our data indicate that regulation of the expression of this new adipokine and its receptor by nutritional status and gonadal hormones may be a part of the adaptive mechanisms related to altered fat mass and its metabolic complications. View Full-Text
Keywords: white adipose tissue; adipokine; leptin; hormonal status white adipose tissue; adipokine; leptin; hormonal status
►▼ Show Figures 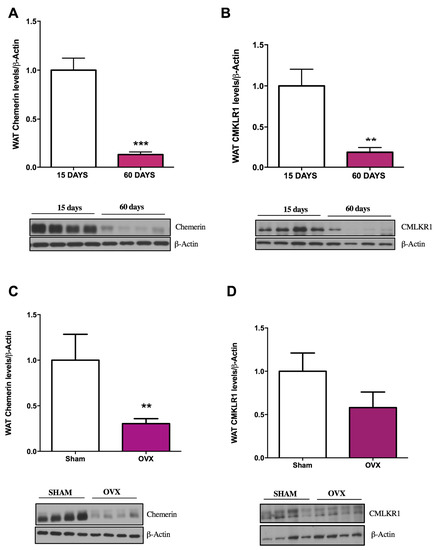